In the environment of big-time sport in North America, few off-the-field individuals garner such media coverage as National Football League (NFL) Commissioner Roger Goodell. Over the past few weeks, as teams begin their training camps and preseason game plans, Goodell remains in the limelight. Recently, fans and pundits questioned his ability to lead because of poor decisions on incidents surrounding star players such as Ray Rice and Adrian Peterson. They ridiculed him for his handling of the now infamous “Deflate-gate.” And he continually stays in the news by handing down suspensions to players for various off-the-field “incidents.” With no games yet being played, Goodell is the most talked about individual in the current culture of the sport. 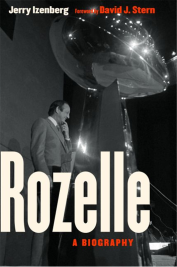 Why do NFL commissioners garner such clout? In his book, Rozelle: A Biography, longtime East Coast sports journalist Jerry Izenberg provides a compelling narrative of the rise of the “commissioner as icon” status in the United States. Izenberg chronicles the life of the charismatic Pete Rozelle, who—during his reign over the NFL from 1960-1989—helped transform the league from an organization on the brink of national-pastime status, to the most popular, and most lucrative, sports organization in North America.

Izenberg argues that Rozelle had more impact on North American professional sport than any other figure, and that his actions led the NFL to reach its current dominant status. To do so, Izenberg details the commissioner’s life from his days as a young member of the Navy during World War II through his retirement from the NFL and his death in 1996. After enduring eighteen months with the Navy, explains Izenberg, Rozelle entered community college and worked part time as a public relations assistant with the Los Angeles Rams of the NFL. He furthered his career when he joined the University of San Francisco Dons sports program, helping promote a gridiron team that for a few years rivaled the big-time football programs across the nation. Rozelle then rejoined the Rams in 1952 where he worked on and off for them for the next seven years.

Izenberg then details Rozelle’s journey from a young and inexperienced commissioner in 1960 to his iconic status late in the century. During his career, Rozelle led the NFL in its competition with the upstart American Football League. He grappled with the fledgling (and growing) player’s unions. He made relationships with Washington D.C., bureaucrats to help the NFL in numerous legal issues, many of them pertaining to antitrust legislation. Rozelle maneuvered the NFL through countless public relations nightmares, including star players Alex Karras’ and Paul Horung’s gambling scandal, the rise of recreational drug and steroid use among players, and the controversial ownership of a sports saloon by “Broadway” Joe Namath. Finally, Rozelle helped catapult the league from a successful venture to the great American spectacle by influencing the creation of Monday Night Football, and expanding the NFL’s championship game into a Super Bowl holiday. All of these actions occurred while Rozelle dealt with a myriad of personalities involved with football that brought trouble to the league, led by the zealous (and bitter) owner of the Oakland Raiders, Al Davis.

Izenberg’s account of Rozelle adds depth to an already well-established line of inquiry in the literature on American professional football. He convincingly illustrates Rozelle’s keen eye for public relations, as well as his shrewd negotiation skills. For example, through a plethora of anecdotes about Rozelle which come from seventy-one interviews—including ones with well-known NFL personalities such as Art Modell, Pat Summerall, Lamar Hunt, and George Halas—Izenberg explains that in NFL board meetings or in negotiations between the league and the government, Rozelle remained in charge at all times. “He had an ability to attract good people and make them feel wanted and important,” explained the former NFL front-office, Baltimore Colts, and Cleveland Browns employee Ernie Accorsi. “I think each of us would have sacrificed our own careers for him if he’d wanted that, but he didn’t.” (p. 59). Additionally, Izenberg consistently lauds the commissioner throughout the book. In describing the aftermath of the Karras-Hornung gambling scandal, for instance, Izenberg refers to Rozelle’s press conference as “the most masterful piece of media manipulation I have ever seen as a working newspaperman” (p. 77). Only in his discussion of Rozelle’s decision to not cancel NFL games following the assassination of President John F. Kennedy does Izenberg critique the former commissioner. In all other aspects, Izenberg sees Rozelle as a perceptive personality with strong business acumen.

One way that Izenberg departs from the traditional narrative of professional football is when he describes the rise of the game in the late 1950s and early 1960s. Many other popular histories of the sport argue—although many historians disagree—that the 1958 NFL Championship Game between the New York Giants and Baltimore Colts vaulted the league from a small-time, industrial game, to a large and substantial part of American popular culture. Izenberg, however, takes a different tack. He agrees that the game “generated the greatest media attention the NFL had ever had.” But he contends that this euphoria lasted only “for a couple of weeks. Then it went back to business as usual” (p. 57). Izenberg places the rocketing popularity of pro football to Rozell’s ingenuity. For example, he declares that the lack of sustained excitement for the 1958 bout “was unacceptable to Rozelle” (p. 57). He then describes how the commissioner created the modern NFL public relations framework, changing the old ways of former commissioner Bert Bell—which Izenberg describes as outdated and “about as exciting as spending an evening watching a fly crawl up a drape” (p. 57). For Izenberg, then, Rozelle—because of his expertise—reconceptualized the connection between sports and the modern media.

Rozelle used his unique ability to walk through many contentious moments, such as Davis’s continual attacks on the league by flip flopping his team between Oakland and Los Angeles, and his participation in a lawsuit between the United States Football League and the NFL. Furthermore, Izenberg is consistent with others who have detailed Rozelle’s influence to the branding of the league. Sport historian Michael Oriard clearly gives much credit to Rozelle for the creation of the Super Bowl and the NFL-AFL merger. However, one major critique of Rozelle: A Biography is that Izenberg does not contextualize the growth of the championship game. The longtime journalist gives due credit to Rozelle, but he does not acknowledge other factors that led to the popularity of football in America—from the game’s association with patriotism and nationalism in light of the Cold War, to its connections with conventional gender norms, and to its associations with the rise of a postmodern corporate economy in the late twentieth century.

Izenberg also positions Rozelle as consistently on the “right” side of history. While Rozelle did much for black athletes, for example—he was one of the first people in white football to recruit players from historically black colleges and universities (HBCUs)—Izenberg ignores the racism that existed in the NFL under Rozelle’s tutelage. For example, managers stacked black players at the “skill positions.” Only fourteen black assistant coaches were on teams in 1980. And upper-management positions in the NFL for African Americans simply did not exist.

Furthermore, Izenberg argues that Rozelle was at the front of the fight against drugs, particularly performance enhancing substances (PES). He mentions (multiple times) that Rozelle became the first major professional sports leader to take a stand on PES. He contends that his actions in the late 1980s—when he finally created restrictions on steroid use in football—was an act of altruism done to help save the players from the dangerous side effects of these new substances. When news came to light that steroids harmed the body, so says Izenberg, Rozelle put an end to their use in the National Football League. Yet, as sport historian Richard Crepeau articulates, Rozelle and other NFL elites knew about the dangers of drugs and steroids as far back as the 1960s. Crepeau argues that Rozelle only took seriously PES when it became a public relations issue for the league. When drugs began to hurt the bottom line—not players’ bodies—Rozelle took action.

Nevertheless, Rozelle offers a look into the popular representation of the commissioner during his reign as leader of the most successful sports organization in the United States—and perhaps the strongest force in the ever-expanding entertainment industry. Izenberg began constructing this captivating narrative of Rozelle during the early stages of his own career. He often mentions how he routinely told the commissioner, beginning in the 1960s, that he was working on a book of his life. Furthermore, Izenberg’s stories about professional football and Rozelle had a large circulation as he wrote for New York’s Herald Tribune early in his career, and then made his name writing for Newark’s Star-Ledger. Therefore, Rozelle: A Biography offers an in-depth illustration of Rozelle’s appearance in popular culture and is useful for an understanding of his popularity—and why we now consider the commissioner such an important role in North American sport.

Andrew D. Linden is an Assistant Professor of Sport Management at Adrian College and a Ph.D. Candidate at the Pennsylvania State University. He is the co-editor of Sport in American History. He can be reached at adlinden@gmail.com or alinden@adrian.edu and can be followed on Twitter @AndrewDLinden. He also maintains his own website at www.andrewdlinden.com.

3 thoughts on “Review of Rozelle: A Biography”