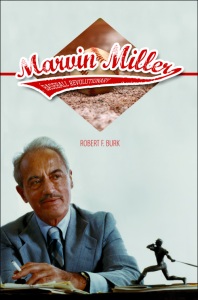 American professional baseball players have not always earned salaries significantly higher than the average citizen. In the 1960s, most drew salaries similar to other middle-class Americans at the time. However, by 2000, professional baseball players—even the lowliest man on the roster—drew a salary that, at the very least, more than doubled middle-class Americans’ salaries. This exponential growth in salaries manifests just one of the many changes in professional baseball’s labor economics traceable to one man: Marvin Miller. In Marvin Miller, Baseball Revolutionary, Robert F. Burk focuses on Miller to chronicle the Major League Baseball Players Association’s (MLBPA) growing power and expanding labor rights during the second half of the twentieth century.

Miller’s impact on labor economics and relations in professional baseball remains unparalleled. His influence did not end with baseball, though. Burk contends that Miller’s legacy as a labor leader transcended baseball and influenced labor economics and relations in other American professional sports. While Miller’s tenure “had introduced more confrontation, [it] had also ironically driven management innovation and revenue growth through geographic and franchise expansion, internationalization, the diversification of industry revenue, and broader—albeit still oligarchic—on-field competition” (p. ix). Miller improved the working conditions and negotiated higher salaries for baseball players, but he also forced baseball owners to become more innovative in how they operated their individual franchises and negotiated as a collective group. For the players, Miller negotiated better hotel and airplane accommodations and helped curb day and night doubleheaders. For the owners, Miller’s presence at the negotiating table required greater cooperation amongst the owners and creativity to stay competitive with the end of the reserve clause. While Burk more than adequately proves his thesis, he fails to critically evaluate the impact of Miller’s tenure on the players and baseball’s public image.

Burk organizes the book around three distinct eras in Miller’s life. Part one, “The Making of a Professional Unionist (1917-1966),” chronicles Miller’s life from birth to the beginning of his tenure as the MLBPA’s labor leader. In this section, Burk illustrates how Miller’s upbringing, family background, and historical context led him to the position as the MLBPA’s labor leader. Though Miller did not set out to become a labor leader, his life and many work experiences pushed him towards his eventual career. Growing up during the Great Depression, working for the government during World War II, and working for Big Steel after the war provided the perspective and training for Miller to become an effective labor leader—no matter the context.

In part two, “Baseball Revolutionary (1966-1985)”, Burk describes Miller’s rise to the MLBPA’s labor leader, and his labor negotiations leading to higher player salaries, improved working conditions, and free agency in professional baseball. Miller accomplished so much as a labor leader due to his ability to listen to player’s concerns and to imagine a different future. Though many players felt reticent about challenging the reserve clause, Miller foresaw the earning power concomitant with free agency. He translated those concerns and vision into concrete changes—free agency, better travel accommodations, higher salaries, and salary arbitration—over several different negotiations. His time and effort as a labor leader made retirement nearly impossible, however. Miller’s struggle to walk away from the MLBPA is detailed in part three, “Defender of the Faith (1986-2012).” Not long after his “retirement,” Miller helped orchestrate the removal of the new MLBPA labor leader Ken Moffett. Miller served as the interim leader and eventually abdicated again to Donald Fehr. Miller managed to interfere less during Fehr’s tenure, yet still stayed close to the action well into the early 2000s. Only death could keep Miller away from labor economics and relations.

To construct his account of Marvin Miller, Burk draws heavily on newspapers and magazines from around the United States—including local, regional, and national periodicals. Drawing from news sources around the country allows Burk to see the reaction to Miller and events surrounding the MLBPA from different perspectives. He also draws straight from Miller. In the book’s preface, Burk talks about his frequent phone meetings with Miller during the waning years of Miller’s life. Burk’s access creates both methodological opportunities and challenges. While Burk gains insider information about very specific events in Miller’s life, he often errs toward hagiography and struggles to find any fault with Miller. Perhaps Burk’s personal relationship, forged during their phone conversations, caused him to forgo a more critical evaluation of Miller’s tenure at the MLBPA.

Marvin Miller, Baseball Revolutionary seeks a wide audience. Casual readers with interest in baseball and labor economics will enjoy the book’s accessible and well-written narrative. Additionally, the book’s comprehensive perspective on an influential figure in professional baseball deserves high praise. Academic readers will also enjoy those aforementioned characteristics of the book; however, some will be disappointed by the lack of deeper analysis. Obviously, free agency expanded the earning power and autonomy for players; however, Burk does not adequately question the negative consequences caused by free agency, such as competitive imbalances between big-market and small-market teams. Furthermore, Burk’s willingness to absolve Miller’s complicity in baseball’s steroid era and competitive imbalance is troubling. Miller defended steroid users, including Barry Bonds, claiming that steroids did not directly aid a players’ ability to perform. Burk seems content to describe what Miller thought about the steroid era, without evaluating his position. Miller’s positive contributions to the game of baseball are praiseworthy; yet his contributions feel less noteworthy without evaluating his shortcomings more seriously. Despite some limitations, the book’s strengths overshadow any weakness, and thus, it warrants a read from both casual baseball fans and academics in labor and sports history.

From an academic perspective, this book adds to the literature on labor economics and relations in professional sports. Overall, unions and labor laws in the United States have weakened since the 1960s. The MLBPA’s rising power and influence provides a counterexample. Burk makes the same observation in the book, but chooses not to flesh out the reasons besides Miller’s influence on the MLBPA. Future research should investigate how and why professional sports unions have become increasingly more powerful and influential, while unions in other industries struggle to even survive. Miller’s imprint on the labor union in baseball and other professional sports has outlasted his life. His work as a labor leader helped secure better salaries and labor rights for professional athletes, which have at best have grown and at worst remained the same. Ultimately, Miller’s greatest contribution was providing the model and standard by which today’s labor leaders in baseball, and other professional sports, are judged.

Alexander Hyres is a graduate student in the Social Foundations of Education at the University of Virginia. He can be reached at adh2rg@virginia.edu and can be followed on Twitter @hyres376.