Susan Cahn’s first edition of Coming on Strong, originally published in 1994, serves as a touchstone for the study of gender and sexuality in sport. Read by many (and not only those scholars with a specific interest in women’s sport, gender, and/or sexuality), her book deftly handles nearly a century’s worth of sport history. In Coming on Strong, Cahn, drawing from both primary sources, including periodicals, newspapers, journals, and interviews, and relevant secondary literature, analyzes “the persistent but unsteady tension between female athleticism and male-defined sport” (p. 6). From the growth of women’s competitive athletics in the early twentieth century, to the development of the All-American Girls Baseball League, to the unique issues encountered by African American and lesbian athletes, the book addresses a number of important challenges faced by women athletes in the twentieth century. Cahn does this, in part, by looking at the intersections between gender, sexuality, race, and class. 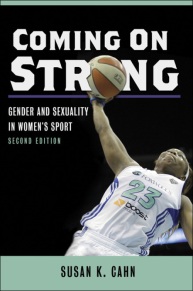 Because the original ten chapters of Coming on Strong remain the same in both publications, I will focus only on the epilogue of the second edition. Entitled, “Are We There Yet? The Paradox of Progress,” the epilogue extends Cahn’s narrative on gender and sexuality in American sport and continues her intersectional analysis. In this section, she turns her attention to specific aspects of late twentieth and early twenty-first century sport, including the Title IX generation, professional sports for women, and the continuing role of femininity and sexuality in women’s athletics.

Cahn’s analysis of the Title IX generation not only touches on some of the progress made by female athletes since the law was enacted in the 1970s, but also on measures that show that women and girls have not yet achieved equality with men and boys. While Cahn recognizes the arguments from opponents of the law, such as the notion that male athletes have lost opportunities because of it, she critiques this not as a problem with Title IX itself, but rather as an institutional and administrative issue. When schools, especially Division I universities, engage in an “arms race” in football and men’s basketball, they contribute to fewer opportunities for men in “minor” sports. So, for Cahn, the problem does not lie with Title IX, but with the organizations that choose football and men’s basketball over men’s swimming and gymnastics. Additionally, her analysis takes into account the extra challenges faced by women and girls of color and those not from privileged socio-economic backgrounds. For example, minority and low income females must confront disadvantages when competing for college athletic scholarships, since the sports with the largest growth at the university level (soccer, lacrosse, and rowing) tend to be offered through expensive clubs or suburban sport programs for high school aged girls.

In looking at professional leagues, Cahn recognizes the growth of sport for women, especially in golf, tennis, and basketball. However, she points to the continuing gap in opportunity, respect, pay, and media attention between women and men. According to Cahn, in order to find success, women athletes must still exhibit the “right” kind of femininity, be considered sexually attractive, and maintain the stereotypes of heterosexuality. Again, Cahn sees the intersection between gender, sexuality, and race, especially when discussing the subtle and overt racism faced by Venus and Serena Williams and the supposed “unattractiveness” of WNBA players, many of whom are African American and/or lesbians.

Lastly, Cahn focuses on sport as a place that polices women’s bodies and femininity and as a site for “producing the norms that govern manhood and masculinity, womanhood and femininity” (p. 302). She uses a wide swath of examples to describe this, including the prevalence of eating disorders in women’s athletics, abuse suffered by girls and women at the hands of their coaches, Rene Portland’s discriminatory policies against lesbian basketball players at Penn State, the sex testing of Caster Semenya, and Don Imus’s offensive comments about the 2007 Rutgers Final Four basketball team. These examples (and others) speak to Cahn’s argument that sport continues to enforce a specific type of femininity and define what it means to be a woman.

Cahn concludes that women’s sports have made progress in the twenty years since the original publication of Coming on Strong. However, she shows that women’s sports, and sport in general, has not undergone a radical revolution. While many more girls and women find opportunity and encouragement in the athletic realm than previous generations, the larger culture of sport remains unchanged.

Sport scholars, especially those who focus on women’s sport, gender, and sexuality, will likely be familiar with the events, figures, and arguments provided by Cahn. Despite this, those who have not followed issues of gender and sexuality closely or students new to the study of sport history will surely find her updated analysis useful. Cahn’s excellent writing and carefully constructed arguments neatly tie her intersectional analysis of a variety of issues in the twenty-first century to a larger framework that concentrates on sport as a site for both challenging and reinforcing notions of femininity.

Within this framework and intersectional approach, Cahn continues to excel, in the epilogue, at complicating issues of gender and sexuality by including the nuanced perspectives of race and class. As she does throughout the rest of the text, Cahn turns her eye toward approaches that do not see women as a monolithic group—women of color and impoverished women do not necessarily encounter the same issues as privileged, white women.

Overall, the epilogue fits within Coming on Strong. It follows a similar structure and scholarly voice as the other chapters of the book. Additionally, it applies Cahn’s powerful critique of contemporary sport to recent events. The epilogue certainly fills the gap of twenty years between the first and second editions and provides a well-written, critical, and insightful appraisal of the current state of women’s sport.

Colleen English is an Assistant Professor of Kinesiology at Penn State Berks. Her research focuses primarily on issues surrounding gender in sport. She can be reached on Twitter @colleen_english or by email at cue113@psu.edu.

6 thoughts on “Review of Coming On Strong: Gender and Sexuality in Women’s Sport”