Travis Vogan has a reputation as a lucid and aggressive interrogator of sporting cultures. So, when I was asked to review his latest work I said yes immediately, despite knowing little about the book’s subject matter. Keepers of the Flame: NFL Films and the Rise of Sports Media is a study of NFL Films, a father-son film production company employed by the National Football League (NFL) for the last fifty years to act as hagiographers of the league and its players. Vogan’s analysis of the company, particularly its impact on America’s relationship with gridiron football, straddles multiple fields: sport history, film and media studies, cultural studies, and marketing. 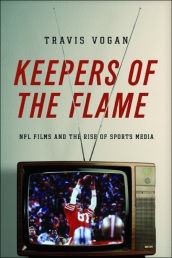 Its potential audience is just as varied. Football fans will no doubt be drawn to this book; however, its intended audience is clearly academia. A glowing endorsement from Michael Oriard on the jacket-cover of the book should be enough for most sports scholars to guess that this is not a straightforward history of NFL Films, but rather an analysis of how the company has shaped gridiron football as a “cultural text.” Keepers of the Flame is an insightful and deeply-researched interrogation of the cultural, economic, and institutional forces that allowed a small production company to become regarded as “perhaps the most effective propaganda organ in the history of corporate America.”

The premise of the book is relatively simple; American Football’s image as a bastion of moral and physical uprightness has been manufactured, in no small measure, by Ed and Steve Sabol and their staff at NFL Films. The premise itself is not groundbreaking, but the way Vogan goes about exploring said premise is something to behold. His analyses are exhaustive and convincing, drawing upon detailed descriptions of NFL Films footage, interviews with key figures (including the late Steve Sabol), and first-hand descriptions of the company’s inner-workings. Vitally, this material is scaffolded by an impressive array of academic and journalistic sources. Of particular note is Vogan’s ability to forge concrete connections between his source material and broader academic or philosophical concepts. He rarely appears to be reaching when drawing conclusions about the cultural significance of NFL Films content, not an easy feat given the relatively niche status of the company within the vast US media landscape.

One of the Keepers of the Flames’ great strengths is the thematic, rather than chronological, way Vogan has organized his chapters. His decision to do so is a clear statement of the book’s intentions. The work does not set out to merely tell the story of NFL Films through the years, but rather to conduct a methodical breakdown of the artistic, personal, institutional, and economic elements that coalesce in each of the company’s distinctive narratives about gridiron football.

In the introduction, Vogan both establishes his premise about the propagandist nature of NFL Films, and also biographies the story’s key human protagonists: Ed and Steve Sabol and their company, Blair Motion Pictures.

It’s a pleasant read and provides important context, but not until the first chapter does Vogan really put his academic hat on in earnest. The first chapter addresses the early years of Pete Rozelle’s tenure as NFL commissioner and how his overhaul of the league facilitated the rise of Sabol’s NFL Films. Rozelle encouraged the league’s teams to begin looking at the NFL as a corporate as well as a competitive structure. By fostering what he called “league think,” Rozelle was able to convince the teams under his authority that participation in the NFL could be far more financially lucrative for all involved if they were able to promote the league in a holistic sense, rather than each team working exclusively to promote themselves. This type of thinking set the scene for the league’s hiring and subsequent acquisition of Blair Motion Pictures (which would later become NFL Films), after Ed Sabol convinced Rozelle that his company could create filmic visions of football that would excite and inspire fans.

Chapter Two is the only real weak-point I could identify in the entire volume. However, the weakness doesn’t stem from any fundamental flaws in Vogan’s arguments or his interpretation of evidence, but rather because this chapter simply isn’t as enjoyable to read as the others. His writing loses some of the verve that makes the other sections so digestible. Chapter Two outlines, in detail, the specific stylistic and narrative techniques that NFL Films use. The discussions that Vogan builds around each technique are important, but become a little repetitive as each comes to the essentially same conclusion: that each of NFL Films’ signature conventions (tight-on-the-spiral shot sequences, John Facenda’s lyrical narration, overly-dramatic narratives, on-field microphones) are all employed with the expressed purpose of depicting the game and its players as reliquaries for masculinity, nationalism, physicality, and a host of other ‘uniquely’ American traits. This conclusion is central to the book’s overall premise; yet, seems a little labored when stretched over 21 pages.

Chapter Three was a wonderful read, probably because I wasn’t expecting to be so stimulated by an analysis of NFL Films’ archival processes. Vogan’s personal access to the “NFL’s Smithsonian” is instrumental to this chapter. His meticulous description of the archive’s inner workings has the potential to be mind-numbingly dull. However, the way he positions each of the archive’s internal machinations as “layers of selectivity” is excellent, especially as he is able to tie each layer of selectivity to tangible examples of how they alter the meaning(s) of the actual films. For example, Vogan discusses the archive’s rating system, which ranks footage from “poor” to “OH GOD.” He argues that the archive’s organization into descriptive, qualitative categories, rather than chronological ones, is evidence that the company’s productions are focused on manufacturing meaning rather than accurate representations of American football. As one might expect in any worthwhile discussion of historical archives, Vogan enmeshes his arguments with references from Michel Foucault, Jacques Derrida and Alan Sekula.

I read Chapter Four on a plane, with a headache, and a noisy snorer in the seat beside me–and it still managed to be the standout section for me, partly because of the subject matter and partly because of the quality of the writing. Vogan writes with a pleasing cadence, with arguments that accelerate with each new piece of evidence introduced. In this section, Vogan moves into a dissection of NFL Films’ self-styled artistic credentials. The chapter is complex, dense, and intensely satisfying, particularly between pages 122 – 126 as he reconciles a number of seemingly contradictory ideas. His argument from Chapters One and Two, that NFL Films is essentially a corporate organ whose productions serve financial purposes, initially seems at odds with the way he describes the company’s aesthetic pretentions under the leadership of the younger Sabol. In this section the reader begins to see the company in a more complex and nuanced light, as Vogan elegantly analyzes how NFL Films productions meld art and corporate propaganda. He concludes that the appeal of an NFL Films production is reliant upon what Pierre Bourdieu calls the “social alchemy” of art, that allows the company to create films that serve seemingly competing purposes: to exist as art-for-art’s-sake whilst simultaneously selling the National Football League to millions of non-artistic consumers.

Chapters Five and Six dovetail nicely with one another and describe NFL Films’ tempestuous relationship with both network and cable television. It is in these chapters that the company’s impact upon America’s relationship with football becomes more measureable. Much of the chapter deals with the business dealings that led the NFL, and NFL Films by extension, to become an integral part of the USA’s love affair with television. The chapter is peppered with often obscure anecdotes that illustrate how deeply NFL Films productions permeated into the sporting consciousness of the nation. One of my favorite moments in the book is Vogan’s description of a Denver pub that raffled off the opportunity to throw a brick through their television whenever Howard Cosell next appeared on screen. The reason? Because Cosell rarely, if ever, showed NFL Films’ highlights of the Denver Broncos during the Monday Night Football halftime show.

As the book draws to a close through the back half of Chapter Six and the conclusion, Vogan glides smoothly into a melancholic, but no less rigorous analysis of the company’s descent into contemporary irrelevance. He tells a familiar tale in many ways: how the demands of 24hr television have left little room for the artisanal products of a company like NFL Films.

Vogan’s conclusion neatly encapsulates the cultural impact that NFL Films productions have had on America’s contemporary understandings of football. He argues that although the company no longer has the autonomy to create the films it wants to, its influence on the USA’s sporting consciousness is measureable in the way that its signature conventions have been adopted, reproduced, and even parodied across a variety of platforms. I particularly liked his reference to the 1991 episode of The Simpsons in which Homer is watching “Football’s Greatest Injuries,” an obvious facsimile of NFL Films’ Crunch Course or Moment of Impact. I remember laughing at this scene as a teen without ever knowing exactly what the show’s writers were parodying. I laughed because the booming score, the baritone narration, and the grisly crunching sounds as a cartoon football player met his end drew parallels with the over-the-top sporting documentaries I’d grown up watching. Remembering my reaction to this joke in The Simpsons was a bit of a lightbulb moment for me and it really solidified Vogan’s overall premise: that the stylistic and narrative conventions of NFL Films have created a vision of gridiron football that has permeated far beyond the small company’s immediate sphere of influence.

Stephen Townsend is a PhD student at the University of Queensland (Australia), in the School of Human Movement Studies. He can be reached at s.townsend@uq.edu.au.

One thought on “Review of Keepers of the Flame”