Nike Pro Combat jerseys were a big deal back in 2010. These specially crafted Nike jerseys were almost always incredible. West Virginia University was one of those few lucky schools back in 2010, and their jerseys were of particular relevance: the uniforms included a tribute to the Upper Big Branch mining disaster, the disaster resulting in the death of twenty-nine miners (that Don Blankenship was sort of held accountable for a few months ago). Both WVU football fans and West Virginians generally were excited to see what Nike designed to honor those who perished in this terrible event. From the Nike Press Release:

In West Virginia, coal mining is a way of life. So is football. With this in mind, Nike designers brought inspiration from the mines above ground to the gridiron. Tribute to the hard-knocks industry is evident throughout the uniform. As the away team at this year’s Brawl, the Mountaineers will be clad in a shade of White that looks as if it has a fine layer of coal dust on the surface…The line represents the beam of light emitted by a miner’s headlamp, and a graphic with the number 29 honors the perished miners at Upper Big Branch. The uniforms additional yellow accents the yellow cleats, reference to the canaries used long ago to test the toxicity in coal mines.

There are quite a few problems with that press release (coal is not a way of life for most West Virginians), but there’s one huge issue that West Virginians didn’t miss. The press release came along with a series of images, and Nike’s image of the WVU jerseys used a backdrop of a mountaintop removal landscape. Also, when the page was loaded, an explosion could be heard and a rock would fall in the background.[1] A large group of fans and environmentalists launched protest, with the Alliance for Appalachia writing an article appropriately titled “Mountaintop Removal – Just do it!” Also angered though were alumni, students, and WVU fans who questioned the implied connection between WVU and strip mining and the tired connection of West Virginia to coal.[2] Nike admitted the image missing the point a bit, especially since the Big Branch disaster was at an underground mine, and quickly removed the background image.

As can be seen from this brief WVU-Nike example, coal and Appalachia are a pair wrought with tension. Coal has, on one hand, historically provided jobs to hundreds of thousands of Appalachian residents and their families. On the other hand, these jobs have come at great cost to economic equality, the land, and the long-term employment sustainability. The state government has, for the most part, supported the coal industry for the past 100+ years, and every politician in Appalachian West Virginia, Kentucky, and parts of Virginia must address political controversies surrounding the industry.

For over a century and into the present day, powerful individuals within Appalachia used sport to promote the coal industry. The WVU-Nike example shows how a company relatively unfamiliar with the region and the coal industry bumbled their way into problems. The politicization of coal forces political statements, even from those with the best intentions, regarding an extractive industry that still causes both celebration and consternation throughout the region. Two examples follow that display just how good the coal industry leaders are at selling themselves. For people in Appalachia, there is often no right answer in answering the coal question, so companies present an easy alternative: support a sports team that has the support of coal.

Coal and sport have a long association with one another in Appalachia. Coal company towns were the driving sporting force in late-nineteenth and early-twentieth century Appalachia. Alongside company-owned stores and housing, coal companies built ball fields and purchased uniforms and equipment. Miners were encouraged to go out and play ball during their time off, which admittedly was not much. Most often, baseball was the game of choice, although football was occasionally played in more northern company towns. Baseball was played within coal company towns at least as early as 1889 through the 1950s, when companies began to slash jobs because of mine mechanization. 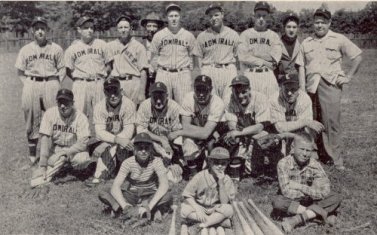 Companies did not endorse sporting events out of the goodness of the their hearts though. The largest coal companies used sports–along with other amenities such as dance halls, hospitals, and schoolhouses–as a form of social control. As the logic went, an unhappy miner could be distracted from economic and labor concern enough to avoid costly shutdowns. Companies hoped baseball would make miners and their families content (or at least content enough) with company town life and would thus  stave off unionization and miner strikes present in other parts of the industrial world. There was also the hope that rivalries would form between company towns and that those sporting rivalries would bleed over into coal production. For the most part, the companies’ paternalistic strategy worked. Miners embraced sports, particularly baseball the Kentucky-Virginia-West Virginia coal fields.

Beyond company towns, baseball clubs often named themselves after the primary occupation of their amateur players or the region they represent. About a dozen amateur and semi-professional teams, not necessarily sponsored or owned by coal interests, went by coal-related mascots from as early as 1895 to 1949: Coal Barons, Coal Miners, Coal Heavers, and Coal Diggers. The West Virginia Coal Sox briefly emerged in the 1990s as an independent professional baseball team, but folded after just two weeks of play and never actually paid their players or coaches. More recently, the Charleston minor league baseball club adopted the name West Virginia Power in 2005 to coincide with their transition to Appalachian Power Park, named for the power company that services electricity to most of the state. This name, in and of itself, is not related to coal, although Appalachian Power has a complicated relationship in the past year with renewable industry.

There are two FBS college in West Virginia, Marshall and WVU, but a football rivalry never developed between the two, evidenced by the two not playing one another a single time from 1924 to 1996. After playing in 1997–Marshall’s first year in Division 1-A–the schools finally played again. WVU won, but the game was competitive and sparked mutual interest in scheduling an annual series between the two.  University administrators couldn’t come to an agreement, ultimately requiring the intervention of West Virginia Governor (now U.S. Senator) Joe Manchin to broker a deal–although many commentators at the time accused Governor Manchin of “essentially forcing this game take place.” The brokered deal resulted in a seven game series to take place from 2006 to 2012.

Officially, the WVU-Marshall series was not to be named at first, but the state quickly awarded series naming rights to Friends of Coal without any sort of competition or open sponsor bidding. Friends of Coal agreed to pay roughly a million dollars for this right (which comes out to a little under $75,000 per year per school).[3] In announcing the Friends of Coal sponsorship, Governor Manchin stated “I am so pleased that a sponsor like Friends of Coal has now stepped up to take this game to a level of national prominence similar to the great in-state rivalries of such schools as Florida-Florida State, Alabama-Auburn and Clemson-South Carolina.” Those lofty ambitions never quite came to fruition. WVU won all seven games convincingly, then abandoned the Friends of Coal Bowl for a fuller, more lucrative Big 12 schedule.

So who exactly are the Friends of Coal? In short, Friends of Coal are a special interest group that represent coal interests throughout Appalachia and are well-known (or infamous, depending on who you ask) throughout the region. Friends of Coal’s primary stated goal is to be the unified voice for the coal industry in educating the public on coal’s “vital role in the state’s future.” Over the past decade, possibly the group’s most successful marketing came from its association with sport. Coal industry leaders argue that Friends of Coal sponsorship indicates to the public that the coal industry cares about West Virginia communities; critics argue that sponsorship amounts to little more than coal company propaganda and lobbying and has no place in high school or collegiate sport. Just to be clear, critics include a wide range of people generally united in the belief that West Virginia (and Appalachia broadly) needs to divest themselves from coal interests because the industry is declining, disproportionately benefits a relatively small group, and mountaintop removal are causing irreparable damage.

Overall, it’s clear that universities are willing to take the money offered by Friends of Coal as they offer a much friendlier face than coal barons like Don Blankenship. Coaches, especially retired coaches from WVU and Marshall, serve as official spokesmen for the group as well. As can be seen in these few examples, the pro-coal public relations campaign is always on in West Virginia, and most of the time their message is delivered through amateur sport.

Athletes, coaches, and teams possess the unique ability to speak to the public and can deliver messages that would normally be ignored by the public. Personally, I am a West Virginia University alum, and my Mountaineer fandom is the only reason I am aware of the Friends of Coal existence. Appalachia has a long history of being exploited by the coal industry. Economic inequalities largely caused by extractive industry caused many of the social and economic ills faced by central Appalachia today. It isn’t terribly troubling that universities would accept money from Friends of Coal or that retired coaches would accept an easy income for a few pitches.

What is troubling, however, is the direct connection between West Virginia politics, sport, and the coal industry. Coal company towns created a union-free work force by exploiting their employee-residents’ poverty with full support of Charleston leadership; the Friends of Coal Bowl emerged due to a no-bid contract organized by the West Virginia government and was very likely because of the Governor himself. In truth, these patterns are on par with West Virginia’s history and comes as no surprise to anyone familiar with state politics. It would be great to see a Marshall-WVU rivalry emerge separate from the Governor’s office or coal in the next decade, but, being a little sarcastic here, it wouldn’t be surprising to see the West Virginia governor announce the King Fracking Bowl coming to Mylan Puskar Stadium in the year 2025.

Josh Howard is a Doctoral Candidate in the Public History Program at Middle Tennessee State University. He earned his MA in History from West Virginia University in 2012 and proudly calls Clifton Forge, Virginia, his hometown. His dissertation investigates the utility of talk-back boards and historical empathy in museums, and his sport history research generally covers the intersection of sport and public history.

[1] Mountaintop removal mining is a method of extracting coal developed in the 1970s where the tops of mountains are typically destroyed with explosives to expose coal seams directly. The “tops of mountains” are then disposed of in surrounding valleys, creating “valley fills.” Coal companies argue this method is much more efficient than underground mining methods, while others argue that mountaintop removal heavily pollutes waterways, irreparably destroys landscapes, and actually results in fewer jobs and economic benefits for Appalachia. For more, see Michael Hendryx and Melissa Ahern, “Mortality in Appalachian Coal Mining Regions: The Value of Statistical Life Lost,” Public Health Reports 124 (2009): 541-550.