We have all partaken in some version of the following conversation:

Player X was the greatest player of all time!

What! No way! Are you off your rocker! Player Y was way better. 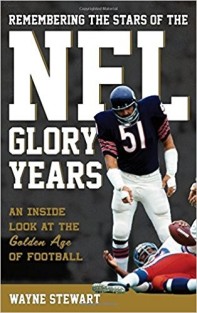 Granted, many of these conversations have taken place over a pint, and most likely while a game is on the box, but nonetheless they have happened and will continue to happen as long as two opposing fans are willing to argue against one another. And as there is usually no resolution to this endless argument, Billy Joel said it best: “We didn’t start the fire. It was always been burning…” Wayne Stewart’s Remembering the Stars of the NFL Glory Years: An Inside Look at the Golden Age of Football  provides more kindling to the unstoppable fiery argument: What era (or player or team) is or has been the best in the history of the NFL?

Stewart argues that the stars of yesteryear “shine with much more luminescence than today’s [stars]” (p. xiv). Viewing through the lens of nostalgia and boyhood memories, Stewart admits that the “genesis for this book is [his] roots in western Pennsylvania” (p. xiii), a known hotbed for producing outstanding NFL players.

In an uneven compilation of information into six areas of interest (The Best Offensive Players; Hall of Fame Defenders…And More; Funniest Quotes and Tales; The Toughest Players; The Best of the Rest; and, The NFL Then and Now), Stewart organizes his thoughts through the use of statistics, former players’ interviews (archived and personal), and anecdotal remembrances. Whereas the sections that address the “best” or “toughest” players on offense or defense of the 1950s and 1960s, familiar names abound: Jim Brown, Gale Sayers, Johnny Unitas, Bart Starr, Fred Biletnikoff, Larry Csonka, Dick Butkus, and Deacon Jones to name a few. Unfortunately, beyond some anecdotal stories provided by former players about playing with or against these stars, and brief statistics and accolades received by these stars during their glory days, the information provided by Stewart is never fully realized or even fully explored against players of the same era. In the off chance that a player receives a fuller treatment of their impact upon the game, Stewart through former players’ interviews gushes over these players and their accomplishments like an overeager fanboy (which in a sense he does admit to being in the brief introduction). When a player is not given the fuller treatment, which is often the case, the player is nothing more than a name on the page, two-dimensional, and easily forgettable if the reader does not have first-hand knowledge or memories of these past titans of the gridiron. The most interesting section of the book, and also the shortest at 13 pages, is the section detailing the funniest quotes and tales of this bygone era. Interestingly, it is this section of the book that Stewart appears to have done the most research. The final section of this work explores how the NFL game has changed from then to now. Again, in a section devoted to 41 of 206 pages, only one source is cited, leaving many of the conclusions provided to appear to be nothing more than an armchair quarterback throwing Hail Mary’s to the readers in hopes that the arguments made are substantiated through sheer luck.

To be fair to Stewart, this book is not intended to be a scholarly examination of the NFL during the golden age of football. It is written in a familiar language accessible for the football layman or the NFL aficionado. And on more than one occurrence, the information shared had this reviewer going to the internet to learn more about a player, the era itself, or to find old footage of these forgotten games. Overall, this book provides a nice starting point for interested readers seeking more historical information of the great players mentioned in the early NFL.

In summary, there is a lot to enjoy with Stewart’s work, but, in this reviewer’s opinion, it comes up short in the end. While the abundance of statistics and anecdotal evidence provided from former players provides interesting insights and arguments and perspectives, the lack of analysis and contextualization of the game then and the game now detracts from the nostalgic enthusiasm of the author’s original intent. Readers who like to engage in the argumentative side of history will have plenty of fodder to say that this era, the Golden Age of the NFL, provided some of the best players to don a jersey. Still, other readers will be able to make their own case of how the NFL game of the golden age is incomparable to the current game because of the level of athleticism, speed, and strength of today’s players. Which reader is correct? This reviewer can’t answer that question. He’ll have to take a knee.

Gavin J. Woltjer is the Library Director for the Billings Public Library in Montana. He can be contacted at woltjerg@ci.billings.mt.us.