My first real memories of the Super Bowl are from January, 1991. Bill Parcells, LT, and the backup Jeff Hostetler versus Marv Levy, Jim Kelly, and Thurman Thomas. My mother, a life-long NY Giants fan, made sure the whole neighborhood knew when Mark Bavaro was playing well. My dad, loyal to a different NFC East team, realized he could annoy her by rooting for Penn State legend and starting Bills linebacker, Shane Conlan. At age six, I couldn’t have cared less about any of that and just thought it was cool that both teams wore red, white, and blue. After all, Super Bowl XXV was a patriotic event first and foremost. This was long before patriotism in sports seemed forced and inauthentic and long before the focus was on reuniting families torn apart by a decade-plus-long war.   But the impression was made: the Super Bowl was a celebration, not just for my family, but for the whole country.

At the end of 1990 and start of 1991, America was champing at the bit, gearing up for war with Iraq. Yellow ribbons lined the route to and from my elementary school, where we wore Giants jerseys and wrote letters to soldiers. I’m not sure which memory is more vivid: Scott Norwood’s kick going “wide right” or the live night-vision broadcast of America unleashing its Cold War stockpile on Baghdad. The two events are inextricably linked in my memory, and I suspect our shared cultural memory, and it’s all thanks to Whitney Houston.

Her now-famous rendition of the Star-Spangled Banner brought together competing strands of popular culture—sports, music, and politics—into one simultaneous celebration. The Super Bowl was not just about the game played that night, but transcended into the role of national celebration. It didn’t matter if you were a Giants or Bills fan, or even a football fan; the Super Bowl was a multifaceted celebration of a multifaceted American culture. In this post I’ll look at how the Super Bowl operates as a national holiday, far beyond its football limitations, negotiating institutional forces and vernacular traditions into a unified celebration across the country.

In his 1994 book All Around the Year, folklorist Jack Santino walks the reader through the American cultural calendar and highlights all the ways in which cultural forces feed off of each other to create a symbiotic and distinct celebration for each holiday. These are almost always tied to more symbolic themes, which remain remarkably stable despite the evolution of the holiday in popular culture. Winter specifically is tied to death and rebirth—a theme that fits the Super Bowl as it serves as the conclusion (death) of the season, while inaugurating a new reigning champion. Santino is ambiguous about the Super Bowl, though, as his definition relies on governmental or institutional recognition as a “holiday.” Somewhat unique in comparison to other holidays, the Super Bowl is entirely a product of popular culture. The game itself has no religious or governmental roots from which to draw authority; it simply exists as a consumer product. And yet, the Super Bowl is a stronger cultural event than many “official” holidays.

As is typical of folklorists, Santino reads cultural values from this and sees American capitalism, corporatism, and masculinity on display in the media event surrounding and including the game. But it’s the response of the individuals watching the game that most interests me; specifically, the emergence of a new and distinct national tradition: the Super Bowl Party. One of the most significant aspects of holidays is that they allow us to mark off time periods by the way we performed a specific holiday. Typically, this is through the serialization of a holiday in our memory. That is, we remember all of our Christmas celebrations as a series of linked annual episodes. The Super Bowl—through the repetition and standardization of the Super Bowl Party—has done this at both an individual and national level and has infused itself into our national culture. 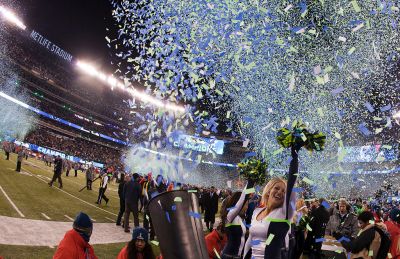 Unlike college bowls or the NFL’s “regular” season, which draw on the participation of specific regions and fan communities, the Super Bowl commands a national—even global—community. The Super Bowl Party has become the ritual through which the individual shows his or her belonging in that larger community. Like any group, membership is policed through both formal and informal means. In this case, the formal question is whether you attended the party, coupled with the informal question of whether you attended the party correctly. Even if the cultural authority for how to dress and act at a Super Bowl Party is learned from popular culture, not organically, there will still be consequences to violating the social norms.  If a person attends a Super Bowl Party in a tuxedo and drinks wine, they’re breaking the invisible boundary and announcing themselves as an outsider.

The reaction to this social dynamic has been the adoption of the holiday at a national level, regardless of engagement with the game itself. Those with no interest in football will still watch “for the commercials.” Those with no rooting interest will fabricate one for the night. Attending a Super Bowl Party doesn’t require watching the game, but has become a signifier of national cultural membership. The emphasis on attending the party—not necessarily watching the game—allows a person to come into work the next day and proclaim, “Yes, I did that thing last night that everyone else was doing.” The same phenomenon happens with other forms of entertainment—series finales, the Olympics, and so forth—but because of the annual repetition of the Super Bowl, now fifty years old, the Super Bowl Party has turned itself into a holiday ritual.

As a genre of celebration, the Super Bowl Party is a larger, more standardized version of typical sports parties. This parallels the game itself, which is a larger, national version of typical football games, especially college football’s numerous bowls. While college bowls have plenty of traditions and rituals themselves, they are often bound by the location of the game or depend on the teams involved. The Super Bowl Party sheds both of those requirements with the “correct” way to perform dictated at a national level. There are regional and geographic variations, but they’re more practical than ritualistic.   For example, watching the game at a bar facilitates a different type of celebration than watching at a friend’s house, both of which are different than watching the game in person from the stands. But even with these variations, there are some traditions we can highlight and examine.

The Super Bowl Party, like any holiday party, has its own aesthetics. Team colors, jerseys, comfortable clothes, and athletic attire are all universal staples. Sometimes the attire conforms to gender or age norms—pink jerseys for women, stylized kids clothes, and the like. In the same vein, the Super Bowl Party has its own unofficially official menu: wings, pizza, beer, celery sticks (if you’re looking for something green) and other indulgent snack foods. There are also some regional or personal variations on these (e.g., swapping one fried food for another), but the uniformity is striking; a Super Bowl Party in California looks and feels like a Super Bowl Party in New Jersey.

The problem then is in determining where the cultural authority is centered. The Super Bowl Party’s aesthetics may have developed organically in some respects, but have very much become standardized through commercial and marketing campaigns. It’s not a coincidence that Pizza Hut broke its sales record during last year’s Super Bowl. It’s not a coincidence that Americans eat 1.25 billion chicken wings on Super Bowl Sunday. These products are sold to us over and over again as the “correct” thing to eat.   Excessive consumption of junk food has been a part of football culture for a long time, as evidenced by a 1960 Sports Illustrated article announcing the publication of Gridiron Cookery, “a collection of the favorite recipes of football coaches’ wives all over the country” written by Frances Daugherty, the wife of Michigan State coach, Duffy Daugherty. In addition to the book, Sports Illustrated helped popularize many well-known Super Bowl party favors, including “chili con queso.” Fast-forward to this year and The New York Times has an entire section devoted to Super Bowl food, featuring a lot of meat, alcohol, and chili dips in various configurations. These article appear as an instructions on how to properly host a Super Bowl, creating a framework of expectations for holiday guests. Again, thematically, this all ties together—a game that revels in its own excess demands excessive celebration from all participating. Popular culture has now become an educational source, informing us how to perform popular culture correctly. This creates a closed system through which a unified national identity can be both imposed and reinforced.

In the media event we call the Super Bowl, popular culture has created its own national holiday. The Super Bowl isn’t a governmental or religious holiday, it’s not an administrative or familial celebration; it’s just American culture celebrating itself. Everything you need to know about American culture can be found at a Super Bowl Party—the good, the bad, and the ugly. Issues of national identity, consumer culture, negotiation of gender roles, celebration of excess, gambling, religion, politics, entertainment… everything is brought out in the open and placed under the spotlights.

That brings me back to Whitney Houston, surrounded by an orchestra and seventy thousand roaring fans. Everything about it was excessive, from her booming voice to the flyover of F-16s. Over the following twenty-five years, I’ve learned how to correctly perform at a Super Bowl Party. I know what to wear, what to eat, and what to drink. I know what buttons to push to annoy partygoers who root for teams I don’t like very much (read: the Philadelphia Eagles). But back then, at age six, all I knew was that the Super Bowl is America incarnate. Sure, there’s the Fourth of July and Christmas and Thanksgiving, but the Super Bowl is when America gets to embrace its own id—the good and the bad; the contradictory and instinctual; the tribal and reactionary. There isn’t some imagined Puritanical ideal we have to live up to, there aren’t any religious rituals we might accidentally violate, there isn’t even a day off from work. There’s just the Super Bowl, in all of its excessive glory. For a limited amount of time, one Sunday every year, America’s id gets to go for a stroll under the spotlights.

Despite the circumstances changing and the party looking a little different with varying characters and settings from year to year, each new episode ensures the Super Bowl becomes more ingrained into American culture. Each Super Bowl celebration is a reflection of America at that moment, of our strengths and weaknesses, of our priorities and our anxieties. The Super Bowl Party is more a mirror than a production.

Collectively and individually we use the Super Bowl as we use every major holiday: a series of flashbulb memories strung together into a chain on which we order our life story. The Persian Gulf War and Super Bowl XXV are inextricably linked in my memory. Other Super Bowls have similar connections to then-current events. By looking back at our own perspectives of these events, a larger picture starts to form—a shared cultural memory, a shared national community built and reinforced exclusively by the imposition and reaction to popular culture.

I can’t wait to find out what memories this year’s game will hold for me. If you have any Super Bowl traditions or recipes, please leave them in the comments and together we can celebrate Americana.

John E. Price is a doctoral candidate and instructor in American Studies and Communications at Penn State Harrisburg. He also serves as Editor of New Directions in Folklore. Price can be reached at jep311@psu.edu or find him on twitter @thejohnprice.