Sports arenas and stadiums seem to come and go at the whims of profit-seeking sports interests. Since the post-World War II period, cycles of stadium construction have produced costly state of the art facilities that are initially touted as architectural wonders or revenue generators, only to become abandoned white elephants after a few decades of use. The “stadium game,” as historian Neil Sullivan has called it, was first pioneered by Major League Baseball franchises in the 1950s and 60s, which used fan allegiances to pressure municipalities to new build stadiums for their teams. Soon thereafter, franchises from the National Football League (NFL) and the National Basketball Association (NBA) deployed the same tactics, using the threat of moving to another city to compel politicians to finance more technologically sophisticated facilities with luxury suites as central features of their designs. Since the 1990s, professional sports teams have been particularly proficient at extracting profitable stadium deals from cities at the expense of the public. In the last few years, the NFL Falcons convinced the City of Atlanta help them build a new stadium even though the Georgia Dome, their current facility, was barely twenty years old. Then there is the infamous case of Wisconsin governor Scott Walker’s decision to supply $250 million in public monies to construct a new arena for the moribund Milwaukee Bucks, the city’s NBA franchise that has not produced a consistently winning team in decades.[1]

This brings us to the case of the Los Angeles Memorial Sports Arena, a facility that somehow remained in operation for more than a half century even though it was without a professional sports franchise throughout much of its history. On May 12, 2016, few were shedding tears when the arena officially closed its doors during a closing ceremony convened by the Los Angeles Memorial Coliseum Commission, the entity that managed the facility throughout much of its history. The brief ceremony marked the end of the arena’s somewhat inglorious history and the dawn of a new era as the site of a new soccer stadium for the expansion LAFC franchise. In March, Bruce Springsteen, perhaps the Arena’s most famous tenant who played dozens of concerts at the old building over the years, closed out the crumbling building with memorable shows in the place he liked to call the “dump that jumps.”

To many Angelenos, the Sports Arena was indeed a dump that had outlived its usefulness. It was the stepchild to the Los Angeles Memorial Coliseum, its more famous neighbor across the street. Others have fondly recalled many memorable moments that occurred at the crumbling facility at 3939 South Figueroa Street in South Los Angeles. An arena that is around for more than half of a century is bound to have some memorable events and the Sports Arena had its share: the 1960 Democratic Convention, the two NCAA Basketball Final Fours, the Springsteen concerts, a few memorable USC basketball games, among others. And yet such events, while historic, do not fully account for the arena’s main contribution to Los Angeles recreational culture. 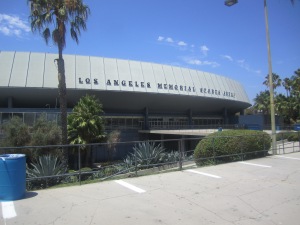 Indeed, as a home to professional sports teams, the Sports Arena was, in many ways, a failed endeavor. When the then state of the art facility opened in 1959, the Coliseum Commission envisioned it as both a memorial to veterans of World War II and the Korean War and as an all-purpose facility that would have professional hockey and basketball as its main attractions. They saw it as a perfect complement to its more famous neighbor across the street—the massive Los Angeles Memorial Coliseum—that had put the city on the map as a sporting capital after it hosted the 1932 Olympic games. In the post World War II era, Los Angeles was emerging as a big time sports city, buoyed by the arrival of the Rams from Cleveland in 1946 and the Dodgers, who scandalously left Brooklyn for the West Coast in 1958. Things seemed to fall into place for the Sports Arena when Bob Short, owner of the Minneapolis Lakers, moved his fledgling basketball franchise from Minneapolis to Los Angeles in 1960. Featuring stars like Elgin Baylor and Jerry West, the team was immediately successful, winning games and attracting fans, even though they repeatedly suffered heartbreaking defeats in the championship playoffs to Bill Russell’s Boston Celtics. In a period when most NBA teams played in aging convention centers or buildings built with other purposes in mind, the Lakers found themselves in a spanking new arena in a burgeoning sports market.[2]

And yet, much to the dismay of the Coliseum Commission, the Sports Arena was never able live up to its aspiration to be the “Pacific Coast mecca for indoor sports.” This was partially the fault of Jack Kent Cooke, the Canadian multimillionaire who swooped into town and bought the Lakers from Bob Short in 1965. Soon thereafter, he outmaneuvered local hockey interests and the Coliseum Commission for an expansion National Hockey League (NHL) franchise and moved both the Lakers and his new hockey team, the Kings, into his own sports palace, the Forum in nearby Inglewood two years later. Cooke’s caper crippled the Sports Arena operation, which had positioned itself to be the home of both franchises.[3] The subsequent success of the Lakers, the Kings, and the Forum was a bitter pill for the Coliseum Commission to swallow. Not even the arena’s remaking of itself as a rock concert venue nor the arrival of Donald Sterling’s hapless Clippers in 1984 could make it a first-rate facility. Throughout much of its history, the aging building was overshadowed by more lavish venues such as the Forum, the Pond in Anaheim, and eventually the downtown Staples Center.

But what the Sports Arena gave Los Angeles was something more valuable—an accessible venue for community social, cultural, and political activities, particularly for the city’s marginalized populations. In a sense, the arena fulfilled the vision of longtime Los Angeles County Supervisor and Coliseum Commissioner Kenneth Hahn, who was a driving force behind the campaign to build the Arena in the 1950s and a steadfast proponent of publicly controlled sports facilities throughout his long political career. Hahn was not far from the truth when he claimed in 1987: “The essence of a great community is providing great facilities so that people have the right to assemble and the right to free speech. These basic constitutional rights are put into effect in the Coliseum and Sports Arena.”[4] Hahn was right in more ways than perhaps he realized. The Sports Arena’s status as a loser in the “stadium game” in the world of professional sports ironically made it a key venue for cultural and political activities for the city’s Latin@ and African American populations. This was consistent with the Commission’s mandate to make the arena available for “political conventions, religious gatherings, civic meetings, trade shows, conventions, and youth rallies.”[5] Springsteen’s “dump that jumped” was where Martin Luther King spoke before an overflow crowd of 25,000 people (10,000 thousand of them standing outside the arena) in the midst of the Civil Rights Movement in 1961; where radical groups like the Black Panthers held “Free Huey” rallies in 1968. It was the place where thousands of Latin@s congregated to mourn the death of Selena, the pop music star who died tragically in 1995, where El Sembrador and other Latino religious groups have held their revival meetings and concerts for several years; where immigrant rights groups staked their claims to equal citizenship just this past year. Not unlike the iconic Coliseum across the street, the Sports Arena realized its mission to be a place where Angelenos of all backgrounds exercised their right to assemble.

This history of public accessibility and civic culture is largely absent in many of today’s ballparks and arenas. Luxury suites, social exclusion, and robust security apparatus characterize the environments of the ballparks and arenas constructed since the 1990s. In their design and relationships to surrounding communities, the privatized and securitized stadium of the present too often symbolizes the neoliberal order of corporate domination and social exclusivity. This dynamic was clear during the protests following the murder of Freddie Gray in Baltimore in April 2015, when Camden Yards, the Orioles home stadium, was converted into a fortress between the city’s affluent baseball fanbase and the city’s black majority population. Whereas the Sports Arena and the neighboring Coliseum, like other facilities from the early to mid-20th century, often provided an important civic function for a wide range of urban residents, most of the ballparks and arenas of today are designed solely for the interests of professional sports teams, corporate sponsors, television networks, and their affluent fanbases.[6]

As we say farewell to the “dump that jumped” and celebrate the arrival of a new fancy soccer stadium at 3939 South Figueroa, let’s not forget the Sports Arena’s legacy of public accessibility. Let’s encourage the designers of the new soccer stadium and the ownership of the new LAFC franchise to carry on some of those traditions of public access, not only for the city’s soccer fanbase—many of whom live in the surrounding South Los Angeles community—but also for those who found the Sports Arena a place where they could express their rightful place in the city.

Frank Andre Guridy is Associate Professor of History at Columbia University. He is currently at work on two book projects: Assembly in the Fragmented City: A History of the Los Angeles Memorial Coliseum and When Texas Sports Became Big Time: A History of Sports in Texas after World War II (Under contract with the University of Texas Press).

[1] Milwaukee Journal-Sentinel, August 12, 2015. On stadiums and urban politics see, Steven A. Riess, City Games: The Evolution of Urban Society and Sports (Urbana: University of Illinois Press, 1989). On the “stadium game,” see Neil J. Sullivan, The Dodgers Move West (Oxford: Oxford University Press, 1987) and his The Diamond in the Bronx: Yankee Stadium and the Politics of New York (Oxford: Oxford University Press, 2001).
[2] On the early years of the Lakers, see Roland Lazenby, The Show: The Inside Story of the Spectacular Los Angeles Lakers in the Words of those who Lived It (New York: McGraw-Hill, 2005).
[3] On Cooke’s purchasing of the Lakers and his scoring of the NHL franchise, see Los Angeles Times, September 17, 1965; and Los Angeles Times, February 10, 1966.
[4] Los Angeles Times, September 27, 1987.
[5] “Statement by Supervisor Kenneth Hahn, Vice President of the Coliseum Commission,” February 25, 1966, Folder 6.2.1, Kenneth Hahn Collection, The Huntington Library, Art Collections, and Botanical Gardens, San Marino, CA.
[6] On the advent of the privatized exclusive ballparks of the post-1990s era in the United States and in other parts of the world, see Daniel Rosensweig, Retro Ball Parks: Instant History, Baseball, and the New American City (Knoxville: University of Tennessee Press, 2005); and Richard Giuliannotti, “Sports Mega Events, Urban Football, Carnivals and Securitised Commodification: The Case of the English Premier League,” Urban Studies 48 (2011), 3293-3310.

One thought on “The Los Angeles Sports Arena: A Modest Memorial”