Reviewed by: Richard A. Macales

Fifty years ago Los Angeles Lakers great Elgin Baylor would have not needed an introduction anywhere, and certainly not in a book review. As Napoleon is reputed to have said, “Glory is fleeting, but obscurity is forever.” Baylor and his legion of fans, however, need not worry. His place is safeguarded  in American sports legend thanks, in part, to basketball writer Bijan C. Bayne, who recreates for today’s reader interesting factoids in his book, Elgin Baylor: The Man Who Changed Basketball. 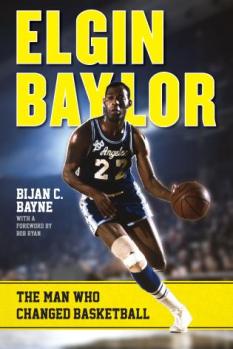 Everything about Baylor was ahead of its time – his style of play, his civil rights stance, and his players’ union activism.  Stylistically on the basketball court, he has been imitated by future Lakers LeBron, Kobe, Magic, and, briefly, Connie Hawkins (not to mention non-Lakers Dr. J and Michael Jordan). As timing would have it, however, Baylor’s greatest seasons were during the NBA’s first generation, when the league often didn’t have a national television contract to showcase his talents during his peak years.

Until the publication of Bayne’s book, published originally in 2015 and reprinted in softcover in 2017, no book had been written solely about Baylor. The book contains very few photos (5), but only one shot of him – posed — in a first-generation L.A. Lakers uniform. No action shot. That would have helped illustrate his story.

Bayne, for some unknown reason, did not interview Baylor for his book, technically categorizing it as an “unauthorized biography.” But it does not contain salacious gossip. Elgin Gay Baylor, born in segregated Washington, D.C., is alive and well in L.A. He will be celebrating his 84th birthday on Sept. 30. Like so much about Baylor’s life, even his true age is a mystery. Bayne points out that his stated year of birth places him a year younger than that listed on his high school graduation transcript at the legendary and newly-opened Spingarn High School in 1952 (inaugurated by early Civil Rights Movement luminaries such as W.E.B. Du Bois and Paul Robeson).

The author provides one explanation for our collective short memories of Baylor: “Baylor never really pursued the attention or favor of the media. At awards banquets he kept it short but sweet. He seldom called attention to himself.” His “no comment” replies to reporters strained relations at times for the normally mild-manner Baylor (p. 141).

What did keep Baylor in the limelight in later years – much to his chagrin — was his disastrous 22-year post as vice president and general manager of the hapless and dysfunctional Los Angeles Clippers. That ordeal finally came to a bitter close in 2008.

To recount Baylor’s story, Bayne relied mainly on newspaper and magazine stories (including many long gone and non-digitalized publications) written about him and the early Lakers (both in Minneapolis and Los Angeles).

Bayne quotes the legendary sportswriter, novelist and NPR contributor Frank Deford as saying about Baylor: “I cannot offer proof of authorship but I have often heard that the word superstar was first applied to basketball hero Elgin Baylor (New York magazine, 1972).

Whether or not Deford’s statement is apocryphal, Elgin Baylor is arguably the innovator of the NBA’s modern style of play, combining raw athleticism with rhythmic gymnastics-like moves.

Most of the records Baylor set in his 14-year career (the last two totaling 2 and 9 regular season games, respectively) have been surpassed by others.

Only one record of his greatness as a player still stands (for an astounding 56 years), and may never be broken: most points scored in a single NBA finals game – 61 (against the Lakers’ perennial nemesis, the Boston Celtics, on April 14, 1962).

Through the career lens of Baylor, Bayne provides us with a nostalgic look at a bygone era in the NBA, when scores were much higher –thanks in large part to Baylor, sans the three-pointer — and crowds were much smaller. (The NBA back then was a distant third in popularity in American sports behind Major League Baseball and pro football.)

Celebrities regularly seen at their then-sparkling new home court, the Los Angeles Sports Arena (the reason the Lakers moved to L.A.), were squeaky clean (and white) Doris Day (Que Sera Sera) and Pat Boone rooting on their hero, Elgin Baylor. L.A.’s African-American community and particularly its media strongly supported the team because of Baylor. Conversely, the mainstream Los Angeles Times announced the Lakers’ move from Minneapolis in 1960 with a small one-column headline.

Baylor had the liability of playing in the shadow of Wilt Chamberlain. Just as the Boston Celtics deprived Baylor of an NBA title, Wilt always surpassed Baylor in scoring during the regular season. As a result, Baylor never led the NBA in any offensive statistical category.

Reviewer’s comment: In today’s modern NBA, Baylor’s three-season-in-a-row scoring averages of 34.8, 38.3, and 34.0 points per game (ppg) during the former Minneapolis Lakers’ first three regular seasons in L.A. (between 1960 and ’63) would have normally earned the 6’5” forward, Baylor, a scoring title. But standing tall in the forefront was the 7’1” center, Chamberlain, a lifelong Baylor friend, according to Bayne, who would later become his teammate (in 1968). In the same time span, Wilt averaged 38.4, 50.4, and 44.8 ppg. Wilt’s regular season stats deprived Baylor of winning an NBA Most Valuable Player Award, an honor he richly deserved.

For 13 months, Baylor held a cherished record, set in 1960, for most points scored in a regular season single game – 71– until that mark too was eclipsed by Wilt, first against Elgin Baylor’s Los Angeles Lakers, followed in short order by “The Big Dipper’s” legendary 100-point performance for Philadelphia against the New York Knicks.

Bayne tells us the many stories behind Baylor’s ultimate futility of futilities — never having won a championship in either the collegiate (Seattle University) or professional ranks — even though he led his teams to the finals nine times (both in college and the pros). Hard luck struck again when Baylor was injured and could not play in the 1965 finals due to a knee injury, just at the time when the NBA resumed its national TV contract.

When the Lakers won their first title in 1972, Baylor retired nine games into that season, the fall of 1971. Immediately after he left the team, the Baylorless Lakers went on a 33-game winning streak, the longest of any major league professional team in any sport, which still stands today. O-U-C-H !!

A lesser-known side of Baylor is his civil rights activism. At the beginning of his professional career he earned the respect of his mainly white teammates, many of whom were from the segregated South. In a chapter titled “I’m not an animal put in a cage,” we learn of an incident in Charleston, West Virginia, site of a Minneapolis Lakers “home” game on Jan. 16, 1959. In that rookie season, Baylor sat out a game in protest because a segregated hotel would not provide him and two black teammates with lodging. A white player on the Lakers, “Hot Rod” Hundley, a native of Charleston, attempted to exert his influence to have another “white” hotel lodge the entire team. He did not succeed. In his parting shot at a white hotel clerk, Hundley said, “This man [Baylor] is more successful than you, and makes a lot more money than you ever will!” (p. 44).

Out of solidarity to Baylor, the entire Laker team agreed to stay at a boarding house in the poor black section of Charleston. When Baylor was refused service at a restaurant (only a bus station sandwich shop would ultimately oblige him and his black teammates) he refused to play the game. Both the Lakers and the NBA refused to discipline him after a petition was made to the league by the game’s co-sponsor, the American’s Businessman’s Club of Charleston. Bayne adds, “The mayor of Charleston initially refused to apologize for the incident…A few days later, the mayor of Charleston called Baylor to apologize.” (p. 45).

In a postscript to this whole episode, two years later Baylor was invited to what was billed as an “all-star game” in Charleston [not the official NBA game]. “Bayne writes, “He stayed at the establishment that refused to host him.” Quoting author Terry Pluto’s book, Tall Tales, Baylor said, “The people apologized to me…They really had the welcome mat out.”

In Los Angeles, Baylor joined a handful of other famous athletes in leading a black voting drive in the city’s rough housing projects in the summer of 1964 through his association with the Students Committee for the Improvement of Watts – one year before L.A.’s Watts Riots.

He also participated in the historic “March on Washington” keynoted by civil rights leader Martin Luther King Jr. on Aug. 23, 1963 (p. 128). Baylor was a favorite of both black and white fans in Los Angeles and other NBA cities (notably excluding St. Louis and Baltimore). He quotes popular football announcer Myron Cope in a March 1963 interview with SPORT magazine. Spoken with Baylor’s characteristic humility, he stated, “…I’m no pioneer or anything like that, but I’m interested in my people and I’m interested in progress.” (p. 46)

Baylor was also an outspoken proponent for the NBA players association; until Bayne’s book he received little or no recognition for a courageous stand he took – which could have ruined his career. The NBA had not been on national TV and one of the leading networks, ABC, decided to take a chance on viewer interest in basketball by televising the 1964 NBA All-Star Game. The all-star squads decided to use the opportunity to boycott the nationally televised game unless NBA owners gave them a pension plan. The owners balked. The players voted not to play. The owners, led by the Lakers’ controversial boss, Bob Short, then threatened to fire their all-star players for the duration of the season.

Baylor told the Lakers’ owner, a tough trucking magnate, who made the loudest threats and tried to barge his way into the players meeting as follows: “Tell Bob Short to [expletive] himself!”  (p. 139). The players held out and won; they got their pension plan and the game was aired to an unknowing and large viewing audience. Thus began the NBA’s road to TV riches. Bayne quotes journalist Harvey Araton as saying that “basketball millionaires, from Michael Jordan through LeBron James, owe their largess to that moment.”

Bijan Bayne’s book on Elgin Baylor brings to life an athlete and civil rights worker who deserves recognition, albeit more than a half-century late.

Rich Macales was a longtime senior writer and public information officer for UCLA. He is a contributor to the encyclopedia/anthology, American Sports: A History of Icons, Idols and Ideas, edited by Prof. Murry R. Nelson, ABC/Clio. He wrote the entries on the Los Angeles Lakers, Kobe Bryant, and Kareem Abdul-Jabbar. He saw Elgin Baylor play at the tail end of his illustrious career.

One thought on “Review of Elgin Baylor: The Man Who Changed Basketball”