In my first post, I provided an argument for the inclusion of Mexican Americans (and other Latinos/as) within the broader framework of the history of US sports.  In that essay, I focused on the story of the only team from the Rio Grande Valley to ever win a state title in Texas’ unofficial religion: high school football.  The success of the Redskins from 1961 provided a great uplift to many in a community that had suffered much discrimination in all areas of daily life.  Hence, the team’s success became the achievement of many Mexican Americans in Donna, and provided a certain impetus to challenge assumptions about this particular group.  The spade work that has been done for other ethnic and racial groups has yielded many stories of great value about teams and individuals who have been heroes and broken down barriers through their athletic skills and successes.

We are just now beginning to unearth such stories for Mexican Americans and other Latinos/as.  While some stories are familiar, for example, the great Roberto Clemente and others who have reached the Major Leagues, what about those whose significance is more evident at the local level?  Surely efforts similar to those used to unearth the role of mutual aid societies, local organizations connected to unions, churches and other such groups will yield stories that can inspire our communities as well as shed light on the role of Spanish-speakers on athletic fields throughout the nation?  It is to one such story that we now turn.[i]

The life of Everardo Carlos Lerma (or “E.C.” as he was known) began in the small farming town of Bishop, near the larger community of Kingsville, in southern Texas in 1915.  Both of his parents were born in Mexico, and they came to the Lone Star State seeking a better life for themselves and (what would eventually be) their one dozen children.  By 1923, both of E.C.’s parents had passed, and the youngest child of the Lerma clan was raised by his older brothers and sisters.  The siblings were determined to make sure that E.C. received an education, and at least graduated from high school (which was a rare feat for Mexican American youths in this era).  While working to make sure that the youngest Lerma was able to attend Kingsville High School, E.C.’s brothers and sisters did not count on his infatuation with the game of high school football, which had arrived in Texas in the 1890s, and which would help motivate him to continue schooling.  Although he grew up poor and attended mostly segregated schools, E.C. became enamored with the violence and speed of football and eventually became one of the first Spanish-surnamed youths to don the KHS Brahmas’ jersey.

The achievement of making the team required much more than just athletic ability, for when Lerma took the field in the early 1930s, his white teammates were, to say the least, less than enthusiastic about his participation.  One time, as an “initiation,” E.C. was tossed in the deep end of a pool.  In a 1997 interview, Coach Lerma recalled that, “I couldn’t even swim.”  Through persistence and talent, however, the young Mexican American from Bishop eventually won most of his teammates over, and even earned all-district honors in his senior year of 1933.  This attracted the attention of then Southwest Conference powerhouse, Texas Christian University.  While a trailblazer in his community, Lerma thought it best to remain near family and friends while attending college.  Thus, he turned down the offer of the Ft. Worth-based Horned Frogs, and instead decided to attend the local institution of higher learning, Texas A&I University (now Texas A&M, Kingsville) and play for his hometown Javelinas.

Circumstances were little different at the higher level of competition and the racism Lerma faced while in high school continued.  E.C. endured taunts, cheap shots and discriminatory practices while on the squad; and that was from his teammates.  Again, as at Kingsville High, he managed to win the majority over due to his athletic abilities and grit.  Lerma lettered for A&I between 1935 and 1937, and earned the respect of his coach, Bud McCallum, who was “a fair, tough, honest football coach that demanded 100% effort at all times.  He cared not what the color of your skin was.” 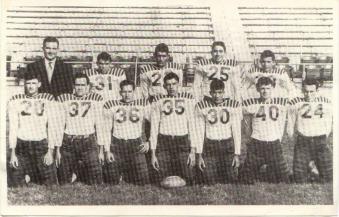 Coach E.C. Lerma with one of his 1940s Benavides High School football squads. Photo courtesy of the Lerma family.

Lerma graduated in 1938, and eventually got a job with the Benavides School District in Duval County.  He was hired to teach science and to serve as assistant coach of the junior high football team.  By 1940, when the head coaching job for the Eagles opened, Lerma believed he had the capability to serve in that capacity.  The reaction of many in town (and on the school board) was as could be expected.  Some even wondered whether a “Mexican” had the intellectual capacity to run a football program.  Later in his life, E.C noted that, “people just couldn’t believe that a Mexican American could do as good of a job as an Anglo.  Well, I think I proved them wrong.”  The administrators of the Benavides schools were well rewarded for taking the “gamble” of hiring E.C. Lerma as one of the first Mexican American head football coaches in the state of Texas.  Between 1940 and 1955, the Eagles complied an impressive run of glory not only on the gridiron, but also in track, baseball and basketball.  The highlights of Lerma’s career as a football coach came in 1943 and 1949 when Benavides claimed regional crowns with undefeated seasons.  At that time, this was as far as teams in this classification could advance. 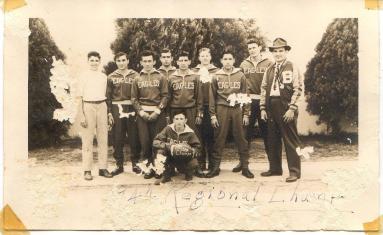 One other important aspect of Lerma’s years as coach at Benavides relates to his relationship with his mostly Mexican American players.  As Joel Huerta notes in his University of Texas dissertation, Lerma served as a paternalistic figure to these young men, and worked to make them successful both on the field and in the classroom.   Huerta argues that although Mexican Americans were still treated as second-class citizens during this era:

Lerma’s strict, paternalistic coaching style…dovetailed with South Texas ranch country ethic…{ultimately} the 1940s and 50s saw increased racial contact and a slow and steady dismantling of segregation in sports, schools and the broader society—often in that order.  Lerma and his…{teams} were trigger points, bell-weather of the changes afoot in this football-obsessed province of Mexican America.

The impact of Lerma’s and others’ efforts bore much fruit in the 1960s and 1970s as success on the field of athletic competition became yet another mechanism with which to challenge stereotypical assumptions of the intellectual and physical capabilities of Spanish-surnamed men and women. 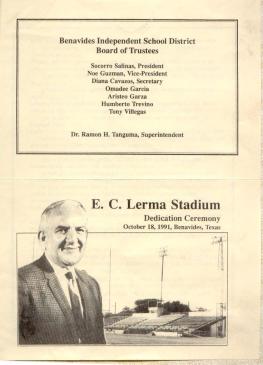 Part of the program for the re-naming of the Benavides High School football stadium in honor of Coach E.C. Lerma, 1991. Photo courtesy of the Lerma family.

Coach Lerma left Benavides in 1955 and moved on to Rio Grande City High School.  He coached for another 10 years, and achieved similar success with the Rattlers.  His legacy in Benavides is demonstrated, in part, by the fact that after he left the BHS Eagles did not make the playoffs again until 1984.  Lerma went on to serve as an administrator in various other school districts throughout the state of Texas.  In 1991, he was granted the honor of having the Benavides football stadium named in his honor.  Again, Huerta effectively summarizes his significance by stating that it was evident “that Mexicanos, especially kids were watching him.  If he succeeded he might encourage them to claim their rightful place on the playing fields, classrooms, marching bands and drill-teams—the mainstream of South Texas everyday culture.”  Coach Lerma passed away in 1997.

The value of the story of athletes and coaches such as Coach Lerma is to recount the challenges they overcame and the success they modeled for others.  This is but one story of Latino/a athletes and coaches who are out there waiting to be researched and analyzed.  In future contributions, I will continue to build upon such stories and bring this population’s history into the broader conversation of American sports history.

Jorge Iber is Associate Dean in the Student Division and Professor of History at Texas Tech University. He can be reached at jorge.iber@ttu.edu.