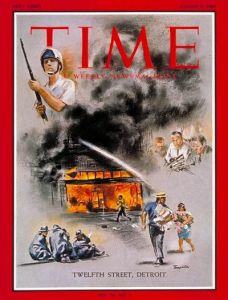 Starting on July 23, 1967, and lasting for five days, several blocks in the 12th street area of Detroit were the scene of one of the deadliest, costliest, and most transformative urban uprisings in American history. Forty-three people died, 2,509 buildings were looted and destroyed, and the destruction cost some $36 million in insurable property damage (259). Although it had been decades in the making, it became the symbol of the urban crisis facing many American cities.

After the embers cooled, Detroit’s philanthropists, civic elites, and representatives of radical groups formed a group called New Detroit, an organization dedicated to promoting an urban renaissance in Detroit more broadly enjoyed by all segments of society (as urban historian Heather Thompson has written). New Detroit explored solutions to many of the obvious causes of the riot—police brutality, educational inequalities, poor economic opportunities. Yet they also keyed in on some of the more unnoticed inequalities of class and race in the city, notably the lack of recreational opportunities and green spaces in the city, creating and funding an organization called the Deprived Areas Recreation Team (DART). When Detroiters looked outside the city’s boundaries, they saw in the suburbs abundant opportunities for play. Immaculate ball fields, swimming pools, and well-kept parks. Meanwhile, Detroit’s Recreation Department struggled with a declining budget as the city continued to hemorrhage residents and their taxes.

Addressing the Deprived Areas Recreation Team, Reverend William T. Patrick, Jr., a champion of youth services, argued that the issue of urban recreation gained new significance in the aftermath of the riots, “Last July 22nd, the subject of our common interest was called recreation. On July 23rd it became wreck-creation.” Patrick argued that the tall order in front of them was nothing less than “re-creation of a shattered city–re-creation of a fragmented society, re-creation of faith in the great American promise.”[1] After the riots, in one of the numerous studies conducted seeking to uncover the causes of unrest, some 80% of residents indicated that they were unhappy with the level of recreational facilities close to their neighborhoods (148-150).

In response to the growing urban crisis, Michigan Governor William Milliken sponsored a conference on urban recreation in Michigan. Detroit residents turned out to the local hearing by the dozens to testify, and to make sure that their vision of urban recreation made it into the official record. One of the central themes that emerged from their testimony is that recreation was more than just leisure—it was central to their dignity, health, and well-being. While suburbanites might have had the luxury of treating recreation as leisure, one black resident noted, “I am fifty years old. I have never known a moment of leisure, because, number one, as a black person, number two, as a poor person, there has never been one minute in my life that has been free from the demand of work or duty.” Howell illustrated the importance of recreation to the inner city: “We conceive of recreation not simply as play. There isn’t a black youngster in the city of Detroit who has the time simply to play.” But recreation was essential because it served to “re-create, not just the physical being, but the spiritual being as well—those things that would tend to contribute to the creation of a complete person.” While solutions to the urban crisis evaded Detroit’s planners and policymakers, local residents made herculean efforts to get recreation included on the agenda for a healthier, more sustainable city.[2]

The urban crisis required a creative re-thinking of how to use dwindling resources to maximize recreational benefits in the inner city. With a budget of just $340,000, the Deprived Areas Recreation Team sought ways to stretch its dollars in developing recreational opportunities. One of their main efforts was called the Vest-Pocket Parks Program. As people and businesses continued their exodus from the city to the suburbs, they left behind a quickly-multiplying number of abandoned spaces and buildings. DART’s answer to the abandonment problem was to turn these environmental hazards in the neighborhood into recreational amenities. Using the labor of neighborhood youth, they would develop abandoned lots into small playgrounds—safe spaces where local children could play outside, while also giving teens jobs. In the neighborhoods where they were developed, the vest-pocket parks were a huge hit, prompting many residents to complain that DART could not develop enough of them, or fast enough. In its short life, the Vest-Pocket Parks Program developed around a dozen of the parks. But despite the modest results of the program, I think the most important result is the creativity and neighborhood participation it produced, proving to doubters that locals were more than willing to invest their own time and efforts to improve their neighborhoods.

More than a decade after New Detroit and DART committed to re-shaping the urban recreational landscape by introducing more opportunities for urban youth, the picture in Detroit—and indeed in most U.S. central cities—remained bleak. Despite significant efforts to improve recreational opportunities in the 1970s, the costs of urban decay and disinvestment overwhelmed local institutions and grassroots activists. The National Urban Recreation Study by the U.S. Bureau of Outdoor Recreation investigated recreational opportunities and inequalities in 1977. In Detroit, investigators found that in neighborhoods lacking conventional recreational facilities, the children made their own, often in hazardous places. Vacant houses, buildings, and factory sites provided “unofficial and uncontrolled recreational facilities,” but they also provided “havens for undesirables.” Investigators interviewed children, who provided important evidence for how they worked around a lack of conventional facilities and how to fix the system. “Near our house there is a packing company and nobody runs it,” said one fifth grader, “But there’s dogs in the yard. Kids go in there and start fires. There’s been two fires in one morning. It is dangerous too. Maybe you could make it a recreation center.” Children recognized that the deserted city offered myriad opportunities for play, if only some effort could be put into “clean[ing] up the park,” turning lots into camping spots, and transforming “vacant buildings into recreation centers,” the kids recommended. Such opportunities, said one fifth grader, would help “so people can stop killing people like those gangs [and] can stop acting a fool.” The significance of recreation for childhood development was not lost on the interviewees, and one junior high student baldly pointed out, “We … know that conditions now determine conditions later.”[3] The grassroots support for improved recreation existed, but the resources never materialized to significantly improve the opportunities.

As the story of the story of Detroit’s push for more recreational spaces in the wake of the 1967 riots reveal, the history of playgrounds and recreation offers an interesting and novel perspective on the history of cities, and indeed the history of sport in America. The problems of racial violence, class conflict, and urban blight converged to create a movement that I call “urban environmentalism,” which valued and promoted recreational spaces as a solution. In the history of recreation, we see an intersection of sport, urban, cultural, and environmental history. The activities of DART in Detroit highlight this intersection and suggest that there is a deeper story.

Sports (particularly professional) and urban development have been the subject of several recent studies, including Kevin Delaney’s Public Dollars, Private Stadiums: The Battle over Building Sports Stadiums.[4] These studies often focus on large-scale projects like stadiums. Far fewer in number are studies that examine the small spaces that make up the recreational landscape of cities. Jeff Wiltse’s Contested Waters: A Social History of Swimming Pools in America is one important example of the advantages of exploring urban recreational sites. Yet more research remains to be done on the baseball fields, the tiny playgrounds called tot lots, the swimming lagoons, the neighborhood YMCA centers, and basketball courts of the central city—often the forgotten small spaces in urban history. Property values, public health, and neighborhood quality are all connected with the recreational opportunities available in neighborhoods, and I think it’s an issue that urban and sport historians both could benefit from exploring further. 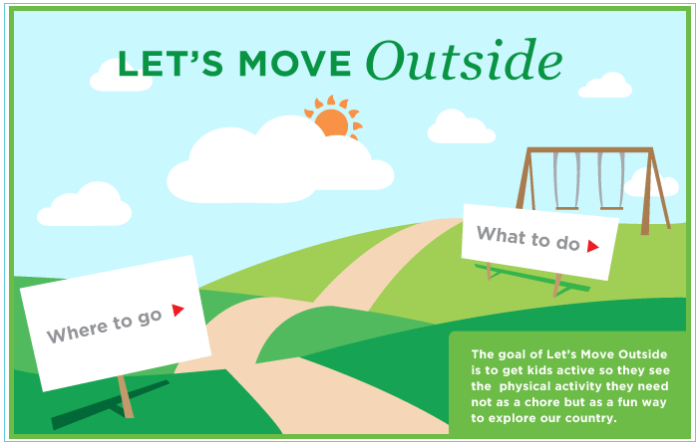 Recent efforts aimed at urging kids to practice healthier lifestyles, most notably the “Let’s Move!” campaign championed by Michele Obama and the NFL’s “Play 60” campaign has the potential to make a positive impact. However, playing outside in the inner city has often been fraught with unique challenges. Efforts to improve the physical activity of youths must reconcile with the historical inequalities that have often left inner-city neighborhoods lacking in facilities. Efforts to get children to play outside in the inner city will flounder without the safe places and decent facilities available to neighborhood children. Campaigns urging outside play are important, but my research suggests that we might have these efforts backwards in the inner city, and we should first make sure there are decent parks and recreational facilities available in inner city neighborhoods. A better example might be the MLB’s program Reviving Baseball in Inner Cities (RBI), which has organized baseball and softball for disadvantaged youth. To paraphrase Field of Dreams, if you build it, they will come.

Brandon Ward earned his PhD from Purdue University in 2014. He is currently working on a manuscript tentatively titled, “Detroit Wild: Race, Labor, and Postwar Urban Environmentalism.” He teaches online history classes at Purdue University and Saint Joseph’s College. You can email him at ward26@purdue.edu or follow him on Twitter at @ward2600.

[3] National Urban Recreation Study: Detroit/Ann Arbor (Bureau of Outdoor Recreation, 1977), 13, 89-90. The microfilmed records from this study of numerous major metropolitan areas is very under-utilized in the scholarship and could form an important primary source base for urban and sport historians.