One of my favorite sports films growing up was The Bingo Long Traveling All-Stars and Motor Kings. It’s a comedy from 1976, featuring three major African-American Hollywood stars: Billy Dee Williams, James Earl Jones, and Richard Pryor. If you haven’t seen it, well you probably should. The film is set in the 1930s, during the financial hard times of the Great Depression and covers the difficult subject of racial discrimination… and it’s really, really funny.

The film’s plot is pretty straightforward. Bingo Long (Billy Dee Williams) tires of an oppressive Negro league team owner who treats him “like a slave,” so he forms his own barnstorming club by poaching other disgruntled Negro league stars from their clubs. Negro league owners protest this by proposing a “winner-take-all” game where the winning side gets the contracts of the players. Of course, Bingo Long wins. The movie ends with an alternative reality when one of Long’s star players triumphantly receives an offer from a white major league club and, with Long’s blessing, the player sets off to break the color barrier.

Bingo Long’s plot is nostalgic and feel-good, but a number of complex and serious questions emerge from close watching. Why did the Bingo Long team act like clowns during their games? What was the deal with Richard Pryor’s character trying to pass as Cuban and/or Native American? Were all barnstorming Negro leagues teams like this? How do we interpret the signing of Bingo Long’s star player? Was it a celebratory moment of integration or a mournful foreshadowing of the death of the Negro leagues? And finally, what did all of these things mean in broader society and culture, and how did they fit in with the burgeoning Civil Rights Movement?

The film never tries to answer these questions, and books on this era of Negro league baseball rarely engage complex questions of racial “passing,” minstrelsy, or naming conventions. Thankfully for me, Sarah Trembanis’s new book, The Set-Up Men: Race, Culture, and Resistance in Black Baseball, engages all of these topics and can provide answers to all the questions that emerge from Bingo Long. In it, Trembanis effectively and succinctly tackles the complex, deep subject of Negro leagues baseball, cultural meaning, and public representation. I would recommend this book to anyone with an interest in cultural history, anyone interested in the early Negro leagues, or even anyone who has simply wondered why so many Negro leagues teams were called the Giants or the Clowns.

This book is all about American racial discourse, African-American resistance, and baseball from about 1880 through the decline of the Negro leagues in the 1950s. However, the core of her argument comes from the so-called “hey day” of the Negro leagues, spanning roughly from 1910 through World War II. Trembanis’s core argument is that during this time period, African Americans created an alternative baseball culture where African-American players, fans, journalists, owners, and others could safely critique and sometimes openly protest segregation, racism, and the white power structure. Each moment of resistance — no matter how small — dismantled a small part of America’s discriminatory practice, reinforced the black community’s commitment to end segregation, and ultimately led to one of the first major integrationist victories with the success of Jackie Robinson with the Brooklyn Dodgers.

As for that last point, she makes it clear that Jackie Robinson was not a sudden result of post-WWII civil rights, but was instead the “reflection of the toil and struggle of the black athletes, fans, writers, and owners who preceded him” (3). This is one of Trembanis’s largest contributions to the historiography of baseball and the Civil Rights Movement. With her successful argument, she has effectively shared the “credit” for Robinson. Most historians, such as Jules Tygiel in his immense work Baseball’s Great Experiment, primarily credited Jackie Robinson (and his wife Rachel), Branch Rickey of the Dodgers, Pittsburgh Courier journalist Wendell Smith, and a small handful of other teammates, Dodgers brass, and members of the African American community. Rarely do historians stretch the Robinson story to before the late-1930s, and even then they tend to do little more than mention these earlier integrationist efforts.

To Trembanis, if Robinson, Rickey, and Smith ultimately demolished Jim Crow segregation in major league baseball, then individuals and institutions such as Rube Foster, Buck O’Neil, clowning clubs, Negro league owners, the black press, and a whole host of others built the necessary framework for them to even mount a challenge in the first place. Trembanis effectively shows though that this earlier group likely did not receive credit in part because it was not a movement, per se, but was instead a loosely collected sporting community with a similar worldview.

Trembanis’s unpacks the worldview of these earlier Negro leagues through careful analysis of baseball folklore, imagery, and other cultural products. Another of her largest contributions with this work is that she takes sources seriously that many other sports historians have not. Many authors on the early Negro leagues dismiss cultural products like trickster tales, clowning teams, or carnival-style game fliers as trivialities or even outright harmful to arguments of African-American triumph. But Trembanis unpacks a great deal of meaning from these oft overlooked sources through her ethnographic and anthropological approach, revealing the layered meanings within the conscious performance of Negro leagues baseball. 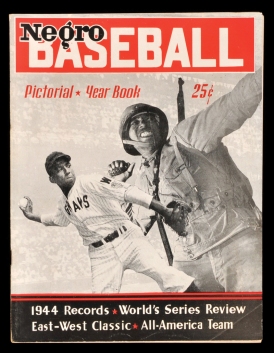 Her work with popular imagery is particularly strong. Through careful deconstruction, she convincingly argues that these images were a form of visual propaganda for both sides of the segregation argument. The white press — represented primarily by Currier and Ives — used minstrel stereotypes to present black baseball as disorganized, chaotic, lazy, and foolish while, as a direct counterpoint, presenting white baseball (both professional and amateur) as well-organized and pastoral. Thus, Currier and Ives helped reinforce the popular notion that African Americans were not and should not be eligible to participate in the American game of baseball. In contrast, the black press (primarily the Pittsburgh Courier, Chicago Defender, and Baltimore Afro-American) portrayed black athletes as powerful, dignified men. With this, Trembanis successfully argues that the black press served a critical role for the black community with this imagery by providing an alternative visual reality to the all-too-prevalent caricatures present in the white press.

Connecting to the ideas of the black press, she also establishes the connection between manhood, the press, and black baseball during this time period. To present this argument, she subscribes to the distinction popularized by Gail Bederman that distinguishes between manliness — the Victorian ideal of gentlemanliness, self-control, and morality — and masculinity — a more modern sensibility expressed through aggressiveness, physicality, and more explicit sexuality. Trembanis shows that tensions between manliness and masculinity existed in black baseball well into the mid-twentieth century. Sportswriters and owners urged players to behave as “gentleman” as a way of showing the respectability of black society and culture. Many players though resisted this call, instead adopting a more modern conception of manhood based on public displays of virility and individuality.

In addition to this new language of the “New Negro” and manhood, Trembanis focuses on the language of black resistance. At many points, Trembanis engages the complex history of racialized language. She does an exceptional job in pointing out seemingly harmless linguistic turns, such as the white press’s use of the word “sandlot” as a descriptor for the style of ball played by black teams. This is a strong theme in her work, and historians should take notice, especially sports historians.

Overall, this is a very good work of cultural history. I only have a few criticisms, and even those are minor and bordering on pedantic. My one major criticism though is the surprising omission of particular secondary sources about African-American baseball media. Specifically, I was expecting to find references to the work of Chris Lamb[1] and Brian Carroll[2], both of whom write extensively about the black sports press and its role in the Negro leagues, baseball culture, African-American culture, and American society as a whole.

The title of Trembanis’s work comes from an obvious baseball metaphor. The “set-up men” in her book are the individuals, teams, and organizations who laid the groundwork for those like Jackie Robinson and Larry Doby. Set-up men — in modern baseball — get little credit as relief pitchers. Their job is to hold the score so that the team’s closer can finish out the game and ultimately protect a team’s lead. Set-up men get very little credit for their job, and it was only recently that a baseball statistic emerged to document their success (holds, which is still just an unofficial statistic). The metaphor is catchy, for sure, but I am not convinced of its fit. Set-up men typically enter the game when their team has a lead, and their job is to hold (like the statistic) the lead until the closer finishes. This metaphor implies that the book’s set-up men — Rube Foster, Satchel Paige, etc. — had a lead at some point during their time. These men never experienced anything resembling racial equality, so while they may have “set-up” for Robinson, they were not pitching for a hold. 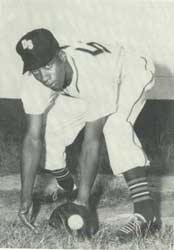 Percy Miller Jr., pictured here during his brief tenure with the Danville Leafs in 1951

Further, Trembanis states that “…closers, like Jackie Robinson, would get the glory, but also have hard ninth innings in which they had to battle” (4). What about the “closers” for whom glory never came? What about Roy Partlow, the African-American ballplayer signed in 1946 by Rickey who flamed out of the minors before Robinson ever played for Brooklyn? What about the numerous black men who broke the color barrier in various minor leagues, such as Percy Miller Jr., the first black ballplayer in the Carolina League? These unknown and largely forgotten men endured as much, and some would argue more, racial abuse than Robinson.[3]

A final minor, yet significant to me, complaint comes from the way Trembanis employs the term “public history.” In her preface, she states “Remarkable black athletes, whose names have now been reinstated into the public history of baseball through the work of scholars and fans starting in the 1970s…” (1). Perhaps a better phrase would have been public discourse, public record, or public annals. For someone like myself who identifies as a public historian, the phrase “public history” embodies so much more than its usage here.

These criticisms aside, this book is very good. It’s readable, it’s well researched, and it furthers our understanding of black culture, society, and sport. It also directly connects the sporting past to broader social movements while reiterating that protest takes many forms.

[2] Brian Carroll, When to Stop the Cheering?: The Black Press, the Black Community, and the Integration of Professional Baseball (Routledge, 2006).

Josh Howard (@jhowardhistory) is a PhD Candidates in the Public History Program in the Department of History at Middle Tennessee State University. He can be reached on Twitter or at Joshua.Howard@mtsu.edu.