Does sport history have a future in academia? If so, what does this future hold? 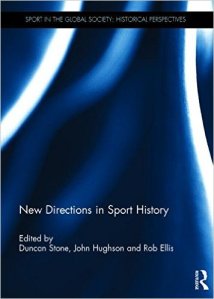 These questions have haunted the field for years. Scholars with a stake in such queries, from a variety of backgrounds, have repeatedly debated the parameter, purpose, role, and status of sport history. Notably, in June 2014, American studies scholars, historians, and sport historians discussed these concerns in the Journal of American History’s special issue “State of the Field: Sports History and the ‘Cultural Turn.’” More recently, sport historians Sarah K. Fields, Andrew D. Linden, and Maureen M. Smith critiqued the conclusions put forward in the JAH at the 2015 North American Society for Sport History Conference in a session titled “Academic Identities, Historiography, and Methodologies: Responses to the 2014 Journal of American History’s ‘State of the Field’.”

Clearly, the questions regarding the nature, utility, and viability of sport history are contested.

In the midst of these recurring conversations, New Directions in Sport History, edited by sport historians Duncan Stone, John Hughson, and Rob Ellis, offers unique insights into the field and provides suggestions for its vitality. The eight chapters that comprise the anthology originated as papers for the 2011 “What is the Future of Sport History?” conference, held at the University of Huddersfield, United Kingdom. Due to the relevancy of the convention, the papers next appeared as a special issue in the January 2013 edition of The International Journal of the History of Sport. As an anthology, the book adds further perspectives to the nebulous question: what is the purpose and future of sport history?

The first three chapters encompass the strongest component of the book. In “Last Man Picked. Do Mainstream Historians Need to Play with Sports Historians?” historian Paul Ward wonders whether those in “mainstream” history–by which he means those working more broadly in the fields of cultural, economic, political, and social history–need to engage with those in sport history. Drawing from his minimal (and begrudging) experience dabbling in the study of sport, he outlines three problems that he thinks prevent mainstream historians from “playing” with sport historians. First, Ward bemoans the lack of quality scholarship in sport-specific academic journals. He argues that too many “amateurs, participants and spectators” pen the histories of sport and are “treated with indulgence” by the field’s journals (p. 10). Second, Ward notes that sport historians frequently confuse what “counts” as history. In his view, most articles and books under the umbrella of sport history focus on exciting events, final scores, or specific teams. Finally, he suggests that presentism runs rampant in the field. According to Ward, if sport historians want to “play” with mainstream historians, they must publish in historical journals, address the needs of historians, and draw out sport’s larger contextual significances in their works.

At this point, some readers may be brisling. Fortunately, sport scholars Matthew L. McDowell and Malcolm MacLean respond to Ward’s points. In “Sport History: Outside of the Mainstream?” McDowell argues that Ward’s points “lack freshness and originality” and suggests his criticisms “descend into a rather unfortunate binary which sees sports history as the antithesis of ‘mainstream history’” (p. 14-15). More specifically, he notes that Ward fails to include any examples of poor scholarship or sub-par journals to substantiate his claims. “One would expect Ward to name names, but sadly this does not happen,” explains McDowell (p. 16). Furthermore, he submits that Ward’s aversion to the field stems more from his admitted dislike of sport than its academic rigor. As a result, says McDowell, Ward paints all sport historians and all of sport history with unfair generalizations. Consequently, Ward’s essay reads as “a hit-and-run approach towards criticising” the field (p. 20).

While many of McDowell’s counterpoints are convincing, MacLean offers solutions in his reply. In “Cracks in the (Self-Constructed?) Ghetto Walls?” he argues that Ward’s constitution of “mainstream” history is dubious; yet, he agrees–at least partially–with many of Ward’s critiques. MacLean concedes that sport historians should aim for publication in historical journals, yet he also believes that sport journals should work to increase their citation rates and academic profiles. He further admits that some sport historians have not translated important events into useful narratives for other scholars. However, MacLean notes that this disconnect is not fully the fault of sport historians; many “mainstream” historians and other academics refuse to recognize the legitimacy of the field. Finally, and most convincingly, MacLean agrees that Ward’s assessment of presentism is correct, but misdiagnosed. Scholars of all stripes are increasingly asked to demonstrate the significance of their scholarship, due to the current pressures of higher education, which leads to an overemphasis on contemporary events.

New Directions in Sport History next addresses how to put the recurring calls for change into action. A common theme, one which surfaced in the 1990s, is that sport historians need to embrace the tenets of postmodernism. Hughson joins the growing chorus of scholars resentful of the claim that sport historians were slow to do this. In “The Postmodernist Always Rings Twice: Reflections on the ‘New’ Cultural Turn in Sports History,” he evaluates Douglas Booth’s assessment of the field. More specifically, he critiques Booth’s “Sport History and the Seeds of a Postmodern Discourse,” published in 2009, which Hughson calls as “a manifesto type advocacy of postmodernism” (p. 36). According to Hughson, sport historians exhibited reflexivity, challenged historical sources, and recognized the complexities of remembering long before Booth’s condemnation. On the heels of this criticism, professor of sport and wellbeing Ian Adams offers an example of dynamic sport history in “The Sporting Image: A Personal Journey Utilising History to Develop Academic Inquiry and Creativity.” He describes The Sporting Image, a module he created for undergraduate sport journalists, which uses literary and visual representations to ensure students understand sport’s impact on society and culture. The module serves to help students recognize “the place of sport in a wider history and to examine how sport is represented beyond the who, where and when” (p. 60).

Rob Light and Rob Ellis, both from the University of Huddersfield, further showcase strategies for incorporating innovative approaches in historical sport research. In “‘Ordinary Working Men . . . Transformed into Giants on the Rugby Field’: ‘Collective’ and ‘Individual’ Memory in Oral Histories of Rugby League,” Light explores the ways in which oral histories can unearth both collective and individual remembering. Through interviews with professional rugby players, he discovered that the athletes described memories seemingly shaped by public discourse and reports, and simultaneously discussed alternative accounts that refuted some of the shared memory. Ellis, on the other hand, demonstrates the significance of cricket in “Asylums and Sport: Participation, Isolation and the Role of Cricket in the Treatment of the Insane.” He argues that the sport served therapeutic purposes; however, it simultaneously created social differences and added to the asylum’s sense of exclusion and isolation.

Finally, Martin Johnes, the head of history and classics at Swansea University, shares his estimations on the future of sport history in relation to the changing structure of higher education. In “What’s the Point of Sports History?” he argues that with skyrocketing student debt, student expectations will fundamentally shift. In other words, as undergraduates increasingly foot the bill for their schooling, they will want to know “what they get in return” (p. 103). Johnes outlines two suggestions to demonstrate the field’s economic value. First, he argues, sport historians need to make their work accessible to the public. “If we want people to believe that our research matters then we have to make it easy for them to read our work,” Johnes pragmatically notes (p. 104). Due to the cost of academic journals and texts, he recommends sport scholars publish on the internet. Second, he believes sport historians must strive to help students develop the ability to think critically. Although history endeavors toward the same goal, sport historians have the advantage of being able to draw students to the field through undergraduates’ love of sport. Essentially, Johnes’ arguments boil down to usefulness: “If higher education is to survive the financial onslaught coming its way, then it needs to show its utility and benefits” (p. 107).

New Directions in Sport History offers diverse opinions on the numerous questions revolving around the status and future of sport history. Importantly, the book provides different perspectives and puts “mainstream” historians in conversation with sport scholars. Moreover, due to the various academic homes of the contributors, New Directions in Sport History presents both philosophical and pragmatic advice for those in the field. However, while the various views serve as an attribute of the work, the articles’ different focuses occasionally lead to unevenness and disjointedness. Yet, most problematically, women fail to make an appearance in the book. The editors acknowledge this omission and note that the glaring lapse resulted from “unforeseen circumstances” (p. 2). Whatever the situation, the male-dominated authorship speaks to larger gender biases in sport history, as well as to feminist critiques of postmodernism.

Despite these flaws, New Directions in Sport History offers a critical assessment of the field and provides advice on how sport historians can better relate to “mainstream” historians, other academic audiences, and undergraduate students. Such prescriptions should be heeded; otherwise, the future of sport history is bleak and the state of the field moot. For as Johnes concludes, “arguing over the relationship between subdisciplines or whether we have studied X or Y enough will be redundant because none of us will have jobs to do any research in the first place” (p. 107).

Lindsay Parks Pieper is an Assistant Professor of Sport Management at Lynchburg College. She can be reached at pieper.l@lynchburg.edu and can be followed on Twitter @LindsayPieper. Check out her website at www.lindsayparkspieper.com.

2 thoughts on “Review of New Directions in Sport History”