In August of 2000, The Replacements, starring Keanu Reeves and Gene Hackman, hit the big screen. The comedy was loosely based on the 1987 NFL players’ strike, a three week period in which the NFL Players Association went on strike and the ownership, in turn, called in replacement players to prevent the stoppage of play. The result, according to sportswriter Peter King, was the beginning of “the most sordid chapter in the 88-year history of the NFL.” Although critics, as did Ted Kluck, largely panned the film, The Replacements’ focus on this event is noteworthy because to date so little about it exists in print and popular culture. 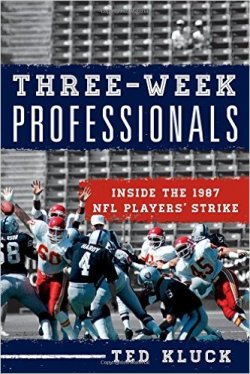 Even more so than the film, Kluck’s Three-Week Professionals: Inside the 1987 NFL Players’ Strike seeks to draw attention to and address misconceptions surrounding this event, which he argues has been largely overlooked because it is “viewed by the league as a dark, embarrassing stain” (p. 5). The purpose of his book is to tell the stories of those involved, replacement players and NFL regulars, who would help “change the face of the NFL forever” (p. 7). Through first-hand accounts, Kluck shows the motivations behind those who crossed the line and the reasons many who did not ended up condoning replacement play.

To journey into what Kluck calls “the darkest and most secretive three weeks in NFL history,” he separates the book into ten chapters, each centered on one player, coach, team, or agent (p. 7). At the heart of these chapters are interviews with those intimately involved. Chapter one tells the story of Chicago Bears replacement quarterback Mike Hohensee, who played for the United States Football League (USFL), Canadian Football League (CFL), and Arena Football League (AFL) before becoming a Bear. Chapter two explores the play of replacement long snapper Joe Bock, who participated in the Continental Indoor Football League (CIFL), Great Leagues Indoor Football League (GLIFL), USFL, and training camp for the Buffalo Bills (NFL) before landing as a replacement player with the St. Louis Cardinals and, subsequently, the Buffalo Bills. Chapter three provides insight from former NFL coach Les Steckel, who was an “offensive assistant” for the New England Patriots in 1987 (p. 40). Chapter four captures the experience of wide receiver Larry Linne, who signed on as a replacement player for the New England Patriots and was kept on for the entire season. Chapter five looks at the replacement play of the Los Angeles Rams, a team that welcomed now infamous West Coast rapper Marion “Suge” Knight to suit up.

Chapter six provides the perspective of lucrative NFL agent Leigh Steinberg, who has represented NFL greats like Troy Aikman and Steve Young but was prohibited from negotiating for replacement players. Chapter seven centers on quarterback John Reaves, who was a first-round draft choice for the NFL in 1972 but whose career involved more arrests than victories (p. 78). He was called in to play for the Tampa Bay Bucs’ replacement team two years after leaving the sport, including a stint with the USFL. Chapter eight looks at how Seattle Seahawks’ players Keith Butler and Jeff Kemp handled the strike, with Butler losing almost 80,000 dollars in contrast to Kemp, who in his first year with the franchise felt called to honor his contract and play (p. 87-88). Chapter nine explores the impact of NFL quarterback great Joe Montana’s decision to cross the line the second week to play for the San Francisco 49ers. Chapter ten culminates with the experience of Cincinnati Bengals replacement quarterback Adrian Breen to delve into one of the final replacement games, the Cincinnati Bengals versus the Cleveland Browns. Despite differences in vantage point – from the replacements to the regulars, from the coach to the agent – together the chapters capture what comprises the NFL experience: the love of the game, pursuit of glory, role of interpersonal relationships, victory, and defeat. The work as a whole shows that most replacement players were elite athletes, with prior experience in semi-professional and professional football. For this reason, many NFL regulars condoned their play, empathizing with their desire to suit up, if only one more time.

Three-Week Professionals is significant because it evaluates the players’ strike through the voices of those who lived it, recognizing oral history as an important methodology for the study of sport. Through these perspectives and Kluck’s lively breakdown of the replacement games, the work shows how much the league has changed since 1987, impacted by 1980s conversations on labor and ownership, economics and play, branding and image, and health and safety. He reveals how by striking the players both lost and won. The replacement players may have never played again, but for three weeks they were a part of an NFL team. NFL regulars’ demands for free agency and better salaries were not initially met, but their efforts would lead to the suing of the NFL and its eventual restructuring, which resulted in free agency with a salary cap. Although the film The Replacements pokes fun at the strike as a work stoppage to gain exorbitant salaries – with one player asking a reporter, “Do you have any idea what insurance costs on a Ferrari?” – the purpose of the strike involved a much bigger concern: the ownership of one’s work. As agent Leigh Steinberg explained, “Once they’re drafted, the team holds all the power. . . . What they were fighting for was worth fighting for: free agency. Deciding where you want to live and work based on whatever combination of factors are most important, including money, coaching, staff, geography, or a winning team” (p. 69). The fact that Kluck gives professionals a say in his exploration of the strike – a say in either why they crossed the picket line or didn’t, why they coached replacements or, in the case of agent Steinberg, couldn’t negotiate for them – shows how much he values their voices as a part of this and the journalistic process. These professionals determined the decision to strike and, in large part, the outcome of the strike itself. The reasons behind their decisions must be a part of our understanding of it.

It is not surprising that Kluck pays careful attention to the perspectives of those who played the games. He was a semi-professional football player and coach, and is the son of a stand-out college and semipro player. He is now a sportswriter. His love of the game and concerns over changes in the NFL are interwoven into the story. In some ways, it strengthens the narrative. Based on his knowledge, Kluck provides an almost play-by-play of the replacement match-ups to depict their bizarre nature; he shares insight from the period as an eleven-year old fan and his perspective as an adult fan to show how the league and its participants have changed. He talks about how important relationships were and are to the building and success of a football team; in establishing his own relationship to the sport, he gains the trust of his audience. The weakness in this role as participant-observer, in which Kluck highlights the many characters involved in the strike – player, coach, agent, owner, and fan, including him– is that he oddly leaves out perhaps the most important character in the story: the strike itself.

In The Replacements, there is a moment when Coach Jimmy McGinty (Hackman) is recruiting former college quarterback Shane Falco (Reeves) to play where he asks, “You know what separates the winners from the losers?” To which Falco replies comically but also quite simply and sensibly, “Yeah, the score.” Yet, there is no simple answer for where Kluck’s work fits in the historiography of the NFL. On the one hand, the oral history he conducts stands as a valuable resource for sport historians interested in this period. On the other hand, this book provides little historical context as to what led to the strike and its ramifications in and for the historical moment. In “State of the Field: Sports History and the ‘Cultural Turn,’” historian Amy Bass notes the role of journalists in the field as a “thorny issue for scholars.” She quotes one publisher who explains they write “the first rough draft of history.” As Kluck demonstrates through the use of first-hand accounts, his draft notably draws from those who lived such histories. Still, Bass continues, “Journalists, no doubt, are not scholars, differentiated by method, context, and perspective; their alternate approaches mean they can lose sight of important historical context and nuance, staying focused on only the precise subject at hand.” Kluck’s approach is admirable, but for historians of sport, in his losing sight, it calls for historical research into why the strike happened, what the struggle over free agency in the 1980s tells us about labor relations in and beyond sport for that particular moment, and what the evolution of the league and its participants in the twentieth-century may reveal about national understandings of labor, sport, and citizenship into the twenty-first.

In the end, Ted Kluck’s Three-Week Professionals: Inside the 1987 NFL Players’ Strike, like The Replacements, makes us want to know more about this bizarre moment in NFL history. A period in which Sean Payton, now a Super Bowl winning coach, would become a Chicago Bear and previous NFL coaching great Mike Ditka would applaud such men and replacement play as the embodiment of the American Dream. Nightmare or dream, stain on the NFL or surprisingly interesting football, Kluck must be applauded for humanizing those who participated in this event. In a time when American pop culture is perhaps more interested in creating villains than upholding heroes, his work is a refreshing reminder of how NFL players – then and now – are foremost everyday people.

Kate Aguilar is a Ph.D. candidate in History at the University of Connecticut where she studies racial formation, gender, sport, and political culture in the post-1945 U.S. Taking as a lens the University of Miami’s football team, the Hurricanes, her dissertation analyzes the central place of the sport and the city to the 1980s development of the New Right; a focus that makes evident the significance of the Global South and the diverse racial, national, and transnational histories of South Florida and the Caribbean to Ronald Reagan’s particular brand of conservatism and the masculine national identity it fostered.  She can be contacted at katelyn.aguilar@uconn.edu.

6 thoughts on “Review of Three-Week Professionals: Inside the 1987 NFL Players’ Strike”