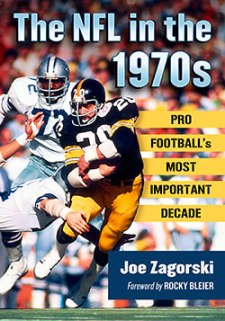 The National Football League (NFL) sits atop all other sports in the United States in every measurable category: ratings, fan interest, and revenues.  It has been that way for decades. This book’s title makes a bold argument about the NFL.  Is the 1970s the most crucial decade? It certainly seems that a case could be made for the 1960s as well, when the competition for players and television contracts between the NFL and the upstart American Football League (AFL) led to the merger that created the modern NFL.  The AFL also pursued African American athletes and placed that part of professional football on the side of social change in the sixties.  The 1960s also saw the NFL become a staple on television and franchises were placed in all regions of the country.  This book argues that the growth of the sport in the 1970s was significant, fueled by factors such as new stadiums, quality teams, great players, rules changes, and the promotion of the sport through NFL Films.

Former sports writer Joe Zagorski carefully examines the 1970s to explain the NFL’s rise to the peak of the American sports world. The NFL in the 1970s is organized into ten chapters, one on each season from 1970 through 1979.   Impressively researched, Zagorski combed through roughly a thousand newspaper and Football Digest articles in addition to books, editorials, and interviews.  His richly detailed chronicle will appeal to the ardent NFL fans, but should not be dismissed as nostalgia.

Zagorski uses the opening pages of each chapter to explain the context for the season, noting rule changes, significant draft picks, franchise moves, and other off-season events.  Here, he makes his most useful contributions to the understanding of professional football.  A reader could focus solely on these early chapter sections and acquire a nuanced sense for the game’s development.  Zagorski charts the evolution of player-owner relations, including strikes in 1970 and 1974, and the evolution of rules.  Most of the time, rule changes came about as a result of controversies the year before, such as the “Holy Roller” game in 1978 between the Oakland Raiders and San Diego Charges in which the trailing Raiders fumbled and batted the ball into the end zone for a game-winning touchdown, triggering rules the following year to prevent such a charade.  He also notes changes to increase offense and promote player safety, such as after Patriot wide receiver’s Daryl Stingley’s paralysis after a hit by Raider Jack Tatum in 1978. Another notable trend tracked by Zagorski involved the challenge of the World Football League in the mid 1970s that was seen as an existential threat to the NFL, but quickly fizzled amid poor ratings and shaky finances.  Sakorski highlights the innovations of the upstart league, recounting the odd contraption known as the Dicker Rod, named for its inventor, which was a device that allowed for a single person to operate the chains signifying down and distance for a first down.

The chapters then become narratives of the progression of each season, with digressions about key games.  They are reminiscent of a highlight show, with the most important games receiving the majority of the coverage, and some readers familiar with the era may almost hear Howard Cosell’s nasal delivery in their heads.  Key playoff games and the Super Bowl receive substantial description.  These sections might lose more casual readers but represent red meat for the dedicated fans.   A real strength of the book is the author’s ability to convey the details of games without digression into jargon or the tedium of a play-by-play.

The book’s progression makes Zagorski’s case: the league’s evolution on and off the field in the 1970s made it America’s game.   Television coverage by CBS and NBC introduced pregame shows and halftime studio programs that allowed viewers to learn about players in depth, or to peek into other games around the league.  Many players who are considered the game’s best, such as O.J. Simpson, Terry Bradshaw,  Joe Greene, and Walter Payton, flourished during the 1970s.  The decade produced some of the greatest teams of all time, such as the undefeated 1972 Miami Dolphins, the Dallas Cowboys, and the Oakland Raiders.  But the team of the decade was the Pittsburgh Steelers, who won four Super Bowls, produced a bevy of Hall of Famers and, in doing so, generated enormous interest in the league.

The growth of the league’s popularity in part can be measured by the volume of material written about the league.  As Zagorski notes in the epilogue, the material available for research grew significantly over the decade.  For those who remember the 1970s, this book will bring back many fond memories.  But the depth and breadth of the research elevates this book far above popular accounts aimed at the fan base.