Along the Waikiki beachfront in Honolulu stands a statue of local hero Duke Kahanamoku. The bare-chested, swim-trunk clad, bronze figure is positioned in front of a surfboard with his arms spread, as if tasked with welcoming visitors to the island. In both life and legacy, Kahanamoku—an Olympic medalist, surfing pioneer, and the island’s proverbial son—bridged the gap between Hawaii and the mainland United States. 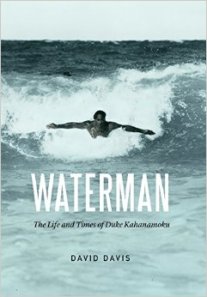 In Waterman: The Life and Times of Duke Kahanamoku, sportswriter David Davis provides a detailed biography of Kahanamoku, Hawaii’s first Olympic athlete. By describing “The Duke’s” story, Davis sheds light on the history of the islands, evolution of Olympic swimming, commodification of surfing, realities of amateurism, and implications of racism in sport. Kahanamoku not only excelled in numerous water-related activities, but he also shouldered the burden of being the face of Hawaii. “When one adds to that mix his contributions to race relations and to the development of modern tourism in Hawaii,” writes Davis, “it is clear that few athletes, alive or dead, can claim a broader legacy” (pg. 3). Waterman therefore sets out to explore the life that created this multifaceted legacy.

Waterman is divided into thirty-two chronological chapters; each focuses on one moment in Kahanamoku’s life. Davis begins with a short history of Hawaii and describes how foreigners slowly gained control of the islands. First Captain James Cook arrived in 1778, followed by the “bible-toting missionaries,” whaling ships, merchant vessels, and sugar plantation laborers (pg. 11). Eventually, manifest destiny convinced the United States to extend its dominion into the Pacific. Consequently, when Kahanamoku was born in 1890, Queen Liliuokalani ruled the Hawaiian Kingdom; when he was ten, the United States deposed the monarch and established the Territory of Hawaii under US control.

After offering a brief account of Hawaii’s history, Davis next describes the water sports that consumed much of Kahanamoku’s time: surfing and swimming. Surfing was a popular pastime amongst native Hawaiians; however, it did not initially find mainland support due to the sport’s Hawaiian (read ethnic) origins. Only when writer and traveler Alexander Hume Ford founded Waikiki’s Outrigger Canoe Club—a white’s only organization—did surfing slowly become more palatable to the white, non-native population. Ford enlisted Kahanamoku’s assistance in teaching him how to ride the waves, yet prohibited the Duke from joining his club. In response, Kahanamoku and two friends formed the Hui Nalu, the “club of the waves,” a racially diverse and gender inclusive surfing group.

While Kahanamoku certainly helped teach and promote surfing, he gained international attention for his swimming prowess. In a 1911 AAU meet, the first held in Hawaii, he smashed two national records. Frustratingly, the AAU authorities in the continental United States refused to ratify Kahanamoku’s results, arguing that malfunctioning stop watches must have mistakenly recorded the times. They therefore requested he travel to the mainland for an official test.

This is where Kahanamoku’s relationship with Hawaii both blossomed and grew rocky, argues Davis. The local populous covered the costs of his travel to the mainland for the competition. From that point forward, though, everyone wanted a piece of the waterman. The contributions “left him beholden to the desires of Hawaiian sport officials, which was something they never let him forget” (pg. 78). Moreover, in this meet—which occurred in a poorly-ventilated building, in an indoor pool without lane-lines—Kahanamoku succumbed to cramps and had to be pulled from the water. Fortunately, once he adjusted to swimming inside, he fared much better. Shortly thereafter, Kahanamoku won his first national title in the 100-meter freestyle race and qualified for the 1912 Stockholm Games, the first Hawaiian to earn a spot on the US Olympic team.

Part of Kahanamoku’s legacy stems from his impressive feats in three different Olympic Games. In 1912, he won a gold medal in the 100-meter freestyle race and a silver medal in the team 4×200-meter freestyle relay. Kahanamoku likely would have dominated the 1916 Games, but the onset of World War I resulted in their cancellation. He defended his title in 1920 and earned gold in the relay. Finally, in 1924 at the age of thirty-four, Kahanamoku finished second in the 100-meter freestyle. His victories are even more noteworthy when considering the racial prejudices of the time. As Davis writes, he was “a groundbreaking figure who was able to overcome—some would say transcend—racism” (pg. 155).

Although Kahanamoku gained celebrity through swimming, his passion for surfing never wavered. After the 1912 Stockholm Games, he competed in surfing exhibitions in Atlantic City, helping foster appreciation for the sport and representing the culture of the islands. “As a newly crowned Olympic swimming hero, he attracted huge publicity,” explains Davis. “People who had never witnessed surfing before, people who had never dreamed of traveling to Hawaii, now knew about surfing” (pg. 68). Yet, similar to when Hume segregated surfing participation in Waikiki, non-Hawaiian marketers and promoters assumed control and quickly commodified the sport.

Even though Davis relies heavily upon chronological organization in Waterman, themes of amateurism and racism appear throughout the work. Indeed, one of Waterman’s greatest strengths is how it highlights the interconnected nature of these two concepts. In telling examples, Davis contrasts the careers and finances of Kahanamoku, Johnny Weissmuller, and Jim Thorpe.

Kahanamoku struggled monetarily for most of his life. In the aftermath of the Olympics, he wanted to cash-in on his newly earned celebrity, however, amateur regulations ensured that he was unable to earn compensation for any swimming-related activities. As Kahanamoku soon discovered, few people had a need for him outside of the water. He therefore had to work a variety of jobs, including as a lifeguard, janitor, gas attendant, and sheriff. Davis explains that the Duke also tried his hand in Hollywood, only to have his acting limited by the racist stereotypes that pushed him into barbarian or villainous roles. “Beyond memories and medals, he had only a small house to show for the sacrifices that he had made to pursue his swimming career and to promote Hawaii,” says Davis (pg. 172)

Weissmuller, on the other hand, had a much easier time navigating the amateur waters. In the 1924 Olympics, the “aquatic Frankenstein” won three gold medals and usurped Kahanamoku as the world’s fastest swimmer. Where the tenets of amateurism stifled the Duke, Weissmuller maintained both coaching and fan support. Perhaps most tellingly, when Weissmuller did turn professional, he easily landed the prize of playing Tarzan on the silver screen. These movies were wildly popular and helped the swimmer amass a fortune. “The fact that [Kahanamoku’s] archival was able to land such a plum role, while [Kahanamoku’s] years-long apprenticeship in Hollywood amounted to little, was an insult,” argues Davis (pg. 171).

Yet, the compounded effects of amateurism and racism may be most noticeable in the fate of Thorpe. As a Native American, Thorpe experienced many of the same obstacles Kahanamoku faced. For example, Thorpe attended the Carlisle School for Indians, which sought to assimilate its pupils; Kahanamoku attended a Kamehameha School, which served to “inculcate religion, discipline, and education in native Hawaiians” (pg. 16). The two athletes first met in the Stockholm Olympics, where Thorpe stole the show by winning the newly-introduced decathlon and pentathlon. However, he fell from grace when it was discovered that he had once played semi-professional baseball. The strict amateur rules, combined with the era’s racist ideologies, resulted in the removal of Thorpe’s medals. According to Davis, it bothered Kahanamoku that Thorpe, his friend, ended up shamed and penniless. And that “in death the world’s greatest athlete was reduced to being a tourist sideshow” (pg. 216). Waterman expertly demonstrates how amateur regulations severely hampered non-white athletes.

While Davis expertly intertwines the histories of Hawaii, swimming, surfing, amateurism, and racism with Kahanamoku’s life, he at times sacrifices depth for breadth in Waterman. His attempt to detail numerous historical moments is commendable, however, he occasionally gleans over the explanations too quickly. For example, Davis writes that the reason the United States did not send female swimmers to the 1912 Games was because “Sullivan sided with Coubertin” (pg. 57). Although it could be argued that the inclusion of women in Stockholm was not central to Kahanamoku’s story, an explanation about gender norms, female physical educators, and male sports promoters would have rounded out the information. Furthermore, Davis ties racism to amateurism, but leaves out additional implications of widespread prejudice. Perhaps most notably, he mentions that many believed Kahanamoku’s talent stemmed from his “otherness.” An analysis here of how this type of racist ideology framed non-white athletic ability as natural, and thereby diminished athletes’ effort or hard work, would have been helpful.

That said, Waterman provides an engaging tale of a Hawaiian icon and an Olympic super star. The relationship between Kahanamoku and his homeland may have been difficult at times—indeed, Davis notes that some Waikiki locals resent that the Duke’s statue faces away from the water he loved so much, and instead faces the tourist shopping traps he despised—but nevertheless, as a Hawaiian athlete, he achieved many firsts, in sport and beyond.

Lindsay Parks Pieper is an Assistant Professor of Sport Management at Lynchburg College and the Book Review Editor of Sport in American History. She can be reached at pieper.l@lynchburg.edu and can be followed on Twitter @LindsayPieper. Check out her website at www.lindsayparkspieper.com.

One thought on “Review of Waterman: The Life and Times of Duke Kahanamoku”