Feel the Bern. An unlikely campaign slogan that has echoed around the world in the last few months, just as Yes We Can did nearly a decade ago. It has drawn commentators into a world of disaffection and alienation that they normally avoid except when reviewing Michael Moore’s latest release. Just what has been driving the surging support for change amongst young people in America and Europe, those traditionally alienated by the political system, and those whose lives are spent in postindustrial precariousness, these commentators and politicians wonder? Why won’t they just go along with the old ways? But the answer is an unsettling one – at least for the Establishment, for the One Percent. For the parallel worlds of privilege and precarity rarely intersect: they have their own institutions and ways of living, and an entire system of criminalization and socio-economic fencing exists to prevent frequent reunion. Only at election times, when alterity comes to the fore, do they collide. 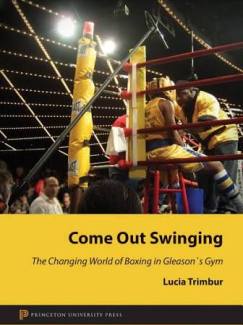 When Come out Swinging: The Changing World of Boxing in Gleason’s Gym–sociologist Lucia Trimbur’s remarkable exploration of postindustrial precarity, race, and boxing at Gleason’s Gym in Brooklyn–was first published in 2013, these worlds still moved in parallel with each other, the precariat had yet to find their political hero who could fight in their corner. But read now, a few years later, amidst a changing political climate, the book emerges as a rich distillation of the tensions, alienations, and grassroots possibilities present in postindustrial America. It challenges scholars of sport to think again about what we’re doing, how we carry out our research, and what our research is really for. Sport, Trimbur concludes, “helps people mediate the injuries of racial, class, and gender hierarchies, but it doesn’t change those hierarchies. Instead it operates within them” (p. 147). If the idea seems familiar, that’s because it developed out of that 1960s school of social history and cultural studies that included figures such as E. P. Thompson and Raymond Williams. But to historians of sport, and the wider field of scholarship on sport, the ideas put forward by Thompson, Williams, and others have never quite been able to overcome the dominance of liberal modernization theory. Trimbur’s book cites Thompson, but Allen Guttmann is nowhere to be seen. Hooray for that!

Having been liberated from the historiographical shackles of traditional sports scholarship, Trimbur’s book explores the complexities of postindustrial precarity intersectionally: over the course of six chapters, she considers labor, masculinity and gender, homosociality, race, and the cultural life of the gym. Trimbur’s aim is always to bring into focus “the social experience of postindustrialism as it is lived” (p. xxi). Chapter one takes us from a bird’s eye view of Post-Reaganite structural change in New York City down to view the impact of those changes on the ground. How exactly did Gleason’s Gym, which ought to have suffered the same fate as other boxing gyms, survive the transition to postindustrialism? Partly through becoming a place of refuge, partly through knowing how to “play the system”, and partly through engendering a sense of collective ordinariness: as Trimbur records, “no one gets preferential treatment” (p. 13).  Chapter two considers boxing as a form of unpaid labor giving the often un- or under-employed amateur boxers the routine and sense of personal worth typically associated with work. This is an important insight and deserves to be much explored in other contexts, contemporary and historical. Sports historians are often neglectful of labor and its meaning; the field would be more effective if it was a more central theme.

Chapters three and five address various aspects of gender, masculinity, and homosociality. The bachelor subculture phenomenon, which was once a common feature of sports historiography, emerges here with contemporary relevance. Through the gym, young disaffected men find the social networks and sense of belonging that helps them navigate wider aspects of their lives. The challenge to this, presented in chapter five, comes from the entry of women into the boxing gym: through Trimbur’s deft handling of the two facets, we can see both the similarities and differences in gym participation. Having made the gym a secular temple of masculinity, it will be no surprise to readers that the presence of women “generated unease among the men of Gleason’s” (p. 91), but at the same time this unease was a signifier of wider anxieties, for instance about the feminization of the workplace, particularly in those industries most closely associated with precarity such as retail. The decline of heavy industry and its replacement with retail on an industrial scale has had especially profound effects on gender relations, this is but one aspect.

Chapters four and six take as their central theme the idea of culture, both the culture of the gym on its own terms and the commercialization of the cultures expressed in the gym. At the heat of chapter six lies the interaction between “blackness” and “whiteness”, the appropriation of Gleason’s Gym and certain of its cultures and ethics by rich, white-collar, white Americans. This complex process can be summed up by the pursuit of “authentic” “black” training methods by wealthy clients of the gym. In common with that other form of appropriation-as-consumption, televised slumming, by which I mean taking wealthy “celebrities” and placing them in contexts of poverty where they can try out living as the postindustrial precariat for a week, this is highly contentious but so often denuded of meaning as to be seen as an everyday occurrence. Drawing on a range of critical literature, and with some implicit nods to writers such as James Baldwin, this chapter serves to remind readers that even when the parallel streams of privilege and precarity appear to cross, they do not do so evenly. The imagined authenticity demanded by privilege ultimately bears little relation to the genuine authenticity of lived experience. The former might as well be a television programm.

Given these themes, and the methodological approach, about which more in a moment, Come Out Swinging inevitably invites comparison with Loic Wacquant’s 2004 study Body and Soul. The latter, centred on the Woodlawn Boys’ Club in Chicago’s Southside, is presented by Wacquant as a “relatively self-enclosed site […] where one can find a respite from the pressures of the street and the ghetto” (p. 26). Gleason’s, Trimbur asserts, on the other hand, is fully exposed to the quotidian pressures of the outside world, it is not a “safe space” in which to avoid what is otherwise going on (pp. 155-6). The consequence of that divergence is a New York gym that feels every bit connected to the challenges of postindustrial life. Sport is not a separate sphere. From a methodological point of view, the subjects of the research differ: working-class Chicagoans on the one hand, members of the New York precariat on the other (although Trimbur does not use that term but “subproletariat”). As did the active participation of the researcher: Wacquant was the “scholar-turned-boxer”, whereas Trimbur maintained a greater degree of distance, taking up some training but never adopting the scholar as participant model of “carnal sociology” (to adopt Wacquant’s phrase). Both methods are undoubtedly effective, but the relative distance enables Trimbur to extract greater generality from her research than does Wacquant.

At its heart Come Out Swinging is a model of scholarship for these precarious times. As early career academics and adjunct faculty find themselves joining the ranks of the precariat, there is much here that echoes our own lives. Indeed, there were times reading this book that faculty lounges and department canteens came to mind as spaces in which the relationships of postindustrial society could also be observed. How often it is, on reflection, that boxing, more than almost any other sport, rescues from the condescension of posterity the rhetoric of protest and enables us to observe (and partake in?) the emergence of the precariat as a post-industrial social class. Humane, provocative, poignant, and written with sensitivity and tremendous clarity of insight, Come Out Swinging is one of the best examinations of sport and society to have emerged in recent years. It is a must read for anyone trying to understand our century and the effects of an economic system that brutalizes all but the lucky few.

Daryl Leeworthy teaches British and American history with the Department for Adult and Continuing Education at Swansea University in the UK. An infrequent NASSHer, his research focuses on the North Atlantic as a sporting borderland and on the labour movement in Britain. He can be contacted at d.s.leeworthy@swansea.ac.uk.

One thought on “Review of Come Out Swinging”