My thoughts on the Duke Lacrosse case have changed.

When news of the rape allegations first broke in March 2006, I was a junior at Virginia Tech and a member of the varsity lacrosse team. I immediately defended the players. The media coverage had created an unfair rush to judgement, I thought at the time. In fact, I wrote an opinion piece about the situation for Tech’s newspaper, the Collegiate Times. “Everyone is entitled the presumption of innocence until proven guilty. Even Duke’s lacrosse players,” I argued. I further blamed the press for scapegoating the Blue Devils “for every single prejudice problem plaguing the town.” Yikes. My writing was embarrassingly naïve and saturated with unrecognized privilege.

In graduate school, my experiences shifted; therefore, so, too, did my interpretation of the case. Studying the intersections of race, class, and gender from a historical perspective encouraged me to question larger societal structures that foster contemporary inequalities. Consequently, my focus switched from media condemnation to the long standing issues of racism and classism in Durham, North Carolina. I shuddered when considering my knee-jerk reaction as an undergraduate.

But, when researching for a paper that assessed the lacrosse community’s response(s) to the allegations, my attention turned to the law. After reading in-depth accounts of the criminal proceedings against the players–such as Stuart Taylor and Patrick Gray’s Until Proven Innocent and Don Yaeger’s It’s Not About the Truth (Yaeger was interviewed for the documentary)–I was abhorred by the commonplace injustices of our legal system.

It turns out that my varying reactions mirror the many different angles of this case.

Director Marina Zenovich wades through some of these layers in the 30 for 30 film Fantastic Lies. The documentary uses news footage and interviews to shed light on the allegations, press coverage, and legal proceedings surrounding the Duke Lacrosse case. In her film, Zenovich tacitly argues that the three Duke players charged with rape were the victims of both media vilification and prosecutorial misconduct. 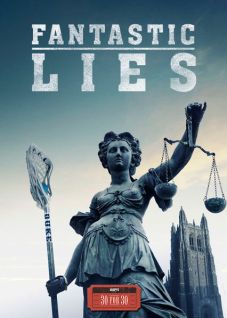 The film opens with footage from the 2005 NCAA National Lacrosse Championship, where Duke lost to Johns Hopkins by one goal. This not only led to high expectations for the returners, but it also increased the team’s popularity on campus. Fantastic Lies notes that the squad was predominantly white, affluent, and elite. While not unusual characteristics for Duke undergrads, the team–and the larger student body–notably differed from the surrounding community. If Duke symbolized power and wealth, Durham symbolized poverty and hardship. As Yaeger explained in an on-camera interview, the tension between the two populaces “was ready-made for the kind of controversy that happened.”

On March 13, 2006, a member of the lacrosse team hired two black women to strip for a team party. Things quickly devolved. Reports suggest that some players directed racial epithets and misogynistic, violent comments at the women. Yet, the crux of the case (and the ensuing backlash) revolved around one of the dancer’s, Crystal Magnum’s, allegations that she had sustained a half-hour long sexual and physical attack in the bathroom.

“It was such a horrific situation and it had all these factors that made it particularly explosive,” said Ruth Sheehan, a columnist for Durham’s News & Observer. “It was like this . . . Molotov cocktail landed in the community.”

The film then explores the immediate and long-term effects of the allegations. Almost instantly, protests rocked the campus; Fantastic Lies provides snippets of the marches, signs, and local commentary aimed at the team. Perhaps most notably, eighty-eight Duke Professors signed a full-page advertisement in Duke’s student paper, The Chronicle, with the provocative headline “What Does a Social Disaster Look Like.” The film shows the ad and provides voice over of some of the lines.

Campus outrage mirrored the reports in the national press. One of the strengths of Fantastic Lies is the interviews Zenovich conducted with the journalists who jumped to conclusions. For example, Dan Okrent of the New York Times acknowledged the rush to judgement and labeled the entire affair a “journalistic tragedy.”

However, if the film positions the media as guilty accomplices, it frames district attorney and lead prosecutor Mike Nifong as the primary villain. Much of the documentary focuses on the criminal proceedings and his wrongdoings. According to those interviewed, Nifong was “unassailable” in his assumption of player guilt, to the extent that he literally covered his ears to avoid hearing damaging evidence brought forward by the defense attorneys. His campaign manager, Jackie Brown, claimed that his obstinacy stemmed from Nifong’s reelection campaign. He was behind in the polls until he brought the Duke Lacrosse players to court.

The most egregious example of prosecutorial misconduct was Nifong’s mishandling of the DNA evidence. After the state crime lab found no traces of DNA on Magnum, the DA hired a private lab to run additional tests. This lab found several DNA traces from different individuals; however, Nifong asked the technician to withhold from the report all information that did not incriminate one of the players. As a result, Nifong was removed from the case and disbarred shortly thereafter. On April 11, 2007, all charges against the three players were dropped.

Fantastic Lies retells the story with the benefit of hindsight. Clearly, the media wrongly presumed guilt and falsely crucified the team. And without a doubt, an overzealous prosecutor, motivated by political aspirations, acted unlawfully. Yet, it seems that Zenovich’s primary goal is to position the Duke lacrosse players as the real victims. To achieve this goal, the documentary largely avoids conversations about sexual assault, racism, classism, and the legal system.

To illustrate the innocence of the team, Zenovich paints those who spoke out against them as irrational fanatics. For example, when depicting the “What Does a Social Disaster Look Like,” the film uses shrill voices that sound frantic and obsessive. The most unsettling portrayal, though, occurs when Duke graduate and ESPN analyst Jay Bilas offers his thoughts on the protestors. As he describes the demonstrators as being “predisposed to believe that narrative,” footage of a Take Back the Night march flashes on the screen. This juxtaposition insinuates that those who protest sexual assault are guided by an empty ideology. Rather than explore the issue of sexual assault on college campuses, Fantastic Lies subtly reinforces a damaging viewpoint.

Likewise, the film presents the players’ plight as exceptional, ignoring the widespread injustices of the US legal system. Although Duke Law Professor James E. Coleman Jr. noted on camera that “what happened to the students is what happens to people ever day in the criminal justice system,” the documentary failed to delve into this unfortunate reality. Unlike most innocent individuals wrongfully charged, the Duke players had the means to fight.

Writing for the Washington Post in 2014, Radley Balko argued that “One of the sad legacies of the Duke lacrosse case is what could have been. The case presented a golden opportunity for [legal] reform.” Fantastic Lies is similarly a missed opportunity. As with the case itself, the film could have explored the racial inequalities of Durham, discussed sexual assault on college campuses, or shed light on the inadequacies of the criminal justice system. Instead, it merely offers an apology to Duke Lacrosse.

People will continue to view the incident, and thus Fantastic Lies, from different perspectives. As Sheehan explained on camera, “we all viewed this story through our own prism.” Many will watch the documentary and hone in on the media outcry or unethical DA. Others will prioritize the racial, gendered, and class undertones of the situation.

Viewed through my own prism as a former lacrosse player and current sport management professor, my response to the film was mixed. I felt sympathy for the three accused players, but was concurrently frustrated by the simplistic retelling that left the larger issues unexplored.

Lindsay Parks Pieper is an Assistant Professor of Sport Management at Lynchburg College and the Book Review Editor of Sport in American History. She played women’s lacrosse for Virginia Tech. Email her at pieper.l@lynchburg.edu, follow her on Twitter @LindsayPieper, or check out her website at www.lindsayparkspieper.com.

8 thoughts on “Review of Fantastic Lies”