Jaime Schultz’s Moments of Impact: Injury, Racialized Memory, and Reconciliation in College Football examines how college football, race, public history, and memory are interrelated by focusing on African American football players for the University of Iowa, Iowa State University, and Drake University. Schultz received a PhD from the University of Iowa and currently teaches at Pennsylvania State University as an associate professor of kinesiology in the History and Philosophy of Sport program. While Moments of Impact focuses on pioneering African American athletes Ozzie Simmons (University of Iowa), Jack Trice (Iowa State University), and Johnny Bright (Drake University) from one state and thus could be viewed exclusively as a state history account, Schultz contextualized the major sport, racial, and American historical events to warrant Moments of Impact’s inclusion onto reading lists for courses on sport history and for the general reader. The work also is important because of its material culture analysis, as Schultz examines how a stadium, a trophy, and a field can and should be used as historical evidence in order to better understand a racialized time period. Schultz coins a new term, “racialized memory,” which she defines as “a communal form of remembering embed with racial meaning and, like all forms of cultural memory, one that inevitably influenced by the sociohistorical context in which it takes place” (p. 2). She reconstructs the historical narrative to include a racial context when remembering Trice, Simmons, and Bright. 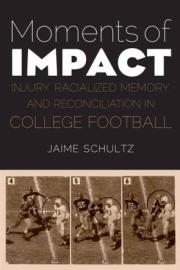 Schultz demonstrates the shifting narratives in commemorating the 1923 Iowa State football player Jack Trice in chapter one. Journalists at first presented Trice as a fallen hero who died from injuries suffered in a 1923 game without racial conflict. Yet Schultz documents how progressive movements during the 1960s and1970s, along with racial debates and incidents on campus, led to students reassessing Trice’s death through a racial lens. Articles written for the Iowa State Daily and the discovery of a memorial plaque of Trice sparked a movement to name the newly constructed football stadium after Trice, even though university administrators favored honoring an influential donor. While a fourteen-member committee of students, faculty, staff, and alumni voted for Cyclone Stadium, an aggressive campaign by the Jack Trice Memorial Fund succeeded in the naming of Jack Trice Field at Cyclone Stadium in 1984 and the erection of a Trice statue in 1988. In 1997, Iowa State fully commemorated Trice with Jack Trice Stadium and also constructed four memorial plaques along the east concourse of the stadium.

Schultz then argues that the appropriation of the Floyd of Rosedale trophy deliberately overshadowed a racially-based attack on University of Iowa’s Ozzie Simmons. Simmons was hurt during the 1934 game between the University of Minnesota and University of Iowa, in which 75 sportswriters were present but could not reach a consensus on why the star halfback was hurt. By the time of the 1935 contest between the two teams, both fan bases were wary of an escalation of dirty play as a result of the previous year’s controversy. Minnesota Governor Floyd B. Olson assured Iowa Governor Clyde Herring the game would be a clean hard fought struggle and also offered to bet a prized hog to the winner. After Iowa lost, without an injury to Simmons, a hog from a Rosedale farm was named after Governor Floyd Olson and the tradition of the Floyd of Rosedale began. As a result, Schultz argues “[s]ociety focused its attention on Floyd of Rosedale, the comic prize in a wager between the two governors, and effectively forgot Ozzie Simmons in the process” (p. 90). But since the Chicago Defender reported Simmons’ 1934 injury was not racially motivated, the evidence is not as strong as Schultz’s argument for Johnny Bright of Drake University’s racial incident.

Schultz’s chapter on Johnny Bright’s injury is the strongest example of a shifting racial narrative. Bright was hurt in Drake University’s 1951 game against Oklahoma Agricultural and Mechanical College when tackle Wilbanks Smith broke Bright’s jaw with a forearm to the face. Photographs of the blow, one of three instances where Bright received an unnecessary fist or forearm shot after handing off the ball, were distributed across the national media but many publications reported it as an unnecessary play indicative of the unethical athletic zeitgeist. The Chicago Defender and the black press led the charge of racism while the consensus in the mainstream media concluded Bright’s athletic skill and not skin color caused the attack. Yet Schultz asserts “[w]hat was once perceived as evidence of dirty tactics and corruption in college athletics now represents the bigotry of an ostensibly bygone era” (p. 129). Numerous newspapers and magazines have subsequently acknowledged race as a factor. In 1985 the New York Times asserted Johnny Bright was attacked because of his race, shifting the paper’s stance from reporting the incident as an illegal forearm attack. Furthermore, Oklahoma State’s President David Schmidly apologized for the Bright incident whereas school officials in 1951 refused to accept any blame.

Moments of Impact is an excellent book that American cultural, sport, and public historians should be aware of. It shows how racial incidents on the playing field are receiving their due acknowledgment, while also documenting how pioneering African American athletes were socially isolated, passed over for awards and accolades, and blackballed from professional opportunities.

Matt Follett is a Public History PhD student at Middle Tennessee State University, where he focuses on modern southern culture. Feel free to contact him with any questions or comments at mfollett618@gmail.com.