Turn on the radio, watch TV, stream a podcast, or open up a web browser and see how long it takes you to learn of someone, somewhere in the world attempting to do something “wild.” Wild is everywhere. Certainly the idea of “getting into nature” for escape, adventure, renewal and self-discovery has been around for a long time. Recently, though, such conquests have been popularized through accounts such as Bill Bryson’s 1998  book A Walk in the Woods: Rediscovering America on the Appalachian Trail (and 2015 film adaptation starring Robert Redford). Cheryl Strayed’s 2012 memoir Wild: From Lost to Found on the Pacific Crest Trail (and subsequent film featuring Reese Witherspoon) was a smashing commercial success, launching Oprah’s Book Club 2.0 and reaching no. 1 on the New York Times Best Seller list. And then there is everyone’s favorite fictional cross-country runner who stands in as explanation (see here and here) for those who attempt these feats in actual life: Forrest Gump.

In Walking on the Wild Side: Long-Distance Hiking on the Appalachian Trail, sociologist Kristi M. Fondren (a long-distance hiker herself) offers an in-depth ethnographic study that, in addition to exploring individual meanings and purposes, turns a lens towards social dynamics and the subcultures that form through long-distance hiking. Fondren illuminates themes of community, belonging, and the importance of place in the collective construction of long-distance hiker identities for those who trek the entire 2,181 miles of the trail on foot. Contrary to the deceiving simplicity of “just picking up and going” as narrated in popular portrayals such as Gump and Strayed’s Wild, those running across the country or hiking through the wilderness are rarely as forlorn, solitary or lacking support systems. 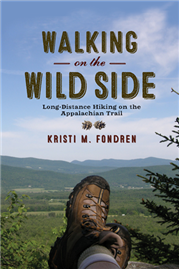 Fondren contends that long-distance hikers (in general) have their own vocabulary, activities and interests, as well as concepts of what is significant in life and how to live according to those values. But place is also a key element beyond hiking as a leisure pursuit. She argues that “the experiences and relationships that emerge among long-distance hikers while on the Appalachian Trail provide hikers with a unique subcultural identity, one that often remains with them after their time on the trail is over” (p. 11). Addressing sociologists’ tendency to focus on the socially–situated self, Fondren privileges an examination of place, noting that we also form identities in “relation to significant places, not solely from attachment to others” (p. 8). For its linkages of embodiment with physical endurance, place, space, and community, one could read this book alongside William Bridel, Pirkko Markula, and Jim Denison’s Endurance Running and Dan Nathan’s Rooting for the Home Team: Sport, Community and Identity.

The centrality of engaging in the physical experience of long-distance hiking over an extended period of time may be of particular interest to sport scholars. Fondren argues this enduring commitment differentiates the group from recreational day or weekend hikers. In other words, immersion in the activity on a daily basis over a period of several months leads to more intense forms of “social intimacy and bonding” (p. 11). As a result of these interactions over a long period of time, the Appalachian Trail (AT) can become an “expression of hikers’ personalities, a significant part of who they are” socially, emotionally, and spiritually (p. 132).

The first chapter opens with a vivid anecdote that gives the reader a sense of the rich community and belonging shared by thru-hikers of the AT, as well as a hint of some their unique behaviors, language, and rituals. The rest of the chapter briefly contextualizes the history of the AT and the phenomenon of thru-hiking, in particular noting a dramatic increase in attempts following the “Great Recession” in 2008. Additionally, Fondren describes the “typical” thru-hiker as an educated white male from a working-to-middle-class (US) American family who has either recently graduated or retired (more on this later). She then explains her methods of participant observation and semi-structured qualitative interviews with 46 long-distance hikers; situates the study within the fields of environmental sociology, leisure and recreation studies; and justifies the book as the “first in-depth research project of its kind” that gives voice to a group largely ignored in scholarship (p. 7). Though relatively light on theory and highly accessible, Fondren employs lenses from social construction and symbolic interactionism, applies cultural studies frameworks to analyze subcultures, identities, and boundary-work, and incorporates Victor Turner’s liminal stage to interpret themes of transformation and pilgrimage.

The book is organized around six chapters which flow seamlessly and expertly from clearly outlined research questions and objectives. The two chapters following the introduction focus on the internal and external negotiations that co-construct long-distance hiker identities, and the place-situated subculture and personas engendered specifically through/with the AT. Chapter four explores the spiritual resonances of transformation and Christian pilgrimage clearly evident in narratives of thru-hikers’ journeys, from separation through transition and eventual reintroduction into society. The penultimate chapter examines social inequalities, differentiation and hierarchies that inform the subculture, often by their invisibility, while the conclusion revisits the book’s major contributions with fresh insights and implications for hiking enthusiasts, scholars, and park or trail practitioners/managers alike.

Fondren’s succinct, clear, and captivating writing style and organization are major strengths. Each chapter has a broad yet contained focus which narrows and tightens on the specifics and nuances through a skillful balance of primary source content and analysis. She is clearly close to the material and acknowledges her multiple positionalities as researcher, ethnographer, and long-distance hiker, while explicitly stating that the book should not be taken as representative of the nearly 4 million people who set foot on the AT each year. If anything, the book might benefit from greater moments of reflexivity. One of the book’s major takeaways is the significance of the AT specifically as a sacred and storied place for those in the thru-hiker subculture. Fondren recognizes that the AT holds special meaning for her too, and empathizes with many of the study’s co-participants. Future studies might further delve into a wider range of experiences on the AT, and in particular, those that are less affirming.

A series of productive tensions emerge in the silences between thru-hikers’ narratives and Fondren’s observations. For example, many of those who attempt thru-hikes of the AT do so at a time of transition in their lives. They see the trail as a way to at least temporarily exit stressful situations at work or home, or even escape spheres of production, consumption, property ownership, and corporate media which they see as unnecessary distractions. Yet, hiking in nature requires some financial support and is its own form of consumption (of nature, leisure, gear, camping, etc.). For some, the physical demands and challenge of tracking a certain amount of miles per day can come to feel like work or competition.

The theme of transformation presents its own contradictions, which takes place through enduring along the trail over a period of several months. The thru-hike eventually “ends” however (this too, though, is complicated by the holistic, multilayered experience becoming intertwined with identity) and individuals return to their less-itinerant form of living. But as evidenced by hundreds of repeat thru-hikers and those who return to the trail as support (known as “trail angels”) for the inexperienced, there is something these individuals do not or cannot “get” elsewhere. In the need to return to the AT and re-create the feeling or connection with the geographically situated space and place, one might interpret the pilgrimage as a continual re-formation rather than trans-formation in the ongoing cultivation of identity.

Notably though, thru-hiking the AT is life-changing for many, in one’s sense of self, relation to others and humanity. The trail comes to be perceived as nurturing, and in turn, prepares walkers to go back out into society with a servant mentality toward their fellow travelers in life. Yet, this alteration takes place for those who “have the time, energy, and motivation to make the journey” (p. 62). A limitation of the study is restricting the analyses of social inequalities and hierarchies to a single chapter. The discussion of how whiteness, male sex, education, age, class, ability, and heteronormativity help to foster such positive experiences, often through their invisibility and disavowal as advantages, would add a critical bent that is often lacking. For example, all 46 participants were identified as white and heterosexuality operates largely as an assumed norm. Cultural sport historians and cultural sport studies scholars may find the critiques of privilege and inequality insufficient or deserving of more attention.

By no means, however, does Fondren simply ignore these issues. She devotes significant space to the reproduction and contestation of gender norms on the AT. The book adroitly accomplishes what it sets out to do, and is an excellent contribution to the reading lists of hiking enthusiasts, leisure and recreation managers, and sport studies scholars interested in nature and the environment – an area in the field where much work remains unheeded. For example, Fondren troubles the “essentialist” vs. “constructionist” view of nature, and leaves readers with the provocative (for some) notion that humans and nature are interrelated. Nature is not inferior, superior or Other, but neither is it only “made to mean” by humans as a social construction. They change and shape one another. Exploring the influences and implications of the sport-nature nexus, now that too, would be wild.

Dain TePoel is a PhD candidate in the Department of American Studies at the University if Iowa. He researches inequalities in sport media production and consumption, and walking and bodily endurance as forms of civil disobedience, nonviolent protest, and consciousness-raising. You can contact him at dain-tepoel@uiowa.edu or on Twitter @DainTePoel.