Tonight, the Atlanta Hawks and Cleveland Cavaliers will tip-off the Unity Game.  Instead of preseason basketball, “celebrating multiracial groups, diverse populations and organizations committed to improving relations among different groups” will assume priority.  A day of community service preceded the game and the half-time ceremony will feature an address by the CEO of the National Center for Civil and Human Rights.  During the national anthem, Hawks players intend to lock arms and will encourage the entire crowd to do so as well.  As Atlanta Hawk Dwight Howard told the Atlanta Journal-Constitution, “It could be something really good here to show that as a city Atlanta is unified no matter color, race, religion that you are.  When you come to these games, we want to show that we are unified and we are together.”

The Unity Game is emblematic of the NBA’s embrace of the athlete protest movement. Or is it?

This preseason the Celtics, Knicks, Rockets, Lakers, Kings, and Raptors have all locked arms during the national anthem.  The league has celebrated these actions, positioning itself the nation’s most progressive and inclusive major professional sports league.  Although admirable, the NBA’s emphasis on unity obviates the core issue of the protest movement sparked by Colin Kapernick.  Kapernick has sat and kneeled during the national anthem because black Americans do not enjoy the full rights of citizenship.  Like the Black Lives Matter Movement, he protests the specific injustices faced by black Americans.  Demonstrations of interracial unity distract from this message. 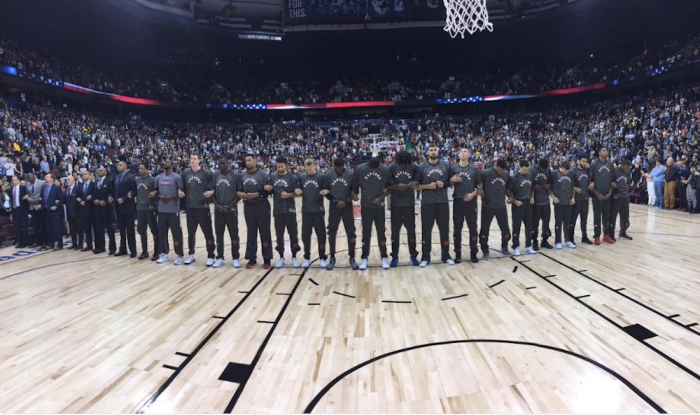 Members of the Toronto Raptors lock arms during their first preseason game. Image courtesy of slamonline.com.

The NBA’s initial involvement in the athlete protested movement appears to be developing into another basketball myth.  Rather than allowing a protest movement to develop organically through player actions, the league preemptively  has promoted a message of unity designed to prevent controversial public relations episodes.  In 1996, the NBA harshly responded to Mahmoud Abdul-Rauf’s refusal to participate in the anthem ceremony.  Abdul-Raul, then a member of the Denver Nuggets, believed the American flag symbolized racism and oppression so he chose stay in the locker room or stretch during the anthem.  When the NBA became aware of Abdul-Rauf’s personal protest they fined him and demanded he stand for the anthem.  Due to the support of the NBA Players’ Association, the league eventually agreed to let Abdul-Rauf bow his head in prayer during the anthem.  Yet, Abdul-Rauf, a penetrating point guard with a sweet stroke, soon faded from the league, experiencing a trade, the loss of his starting position, reduced playing time, and, when his contract expired, no new suitors.  Craig Hodges, a member of 1992 NBA champion Chicago Bulls, encountered a similar fate when he wore a dashiki during the Bulls’ title visit to the George H.W. Bush White House. Hodges, a forty-percent three-point shooter, also handed the President a letter that voiced concerns of black Americans.  Soon after, he was cut by the Bulls and found no other offers. 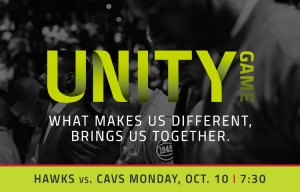 The Hawks advertise the Unity Game. Image courtesy of NBA.com.

In the mid-1990s, the “white basketball unconscious” demanded the erasure of these players and their expressions of black autonomy.  Today’s historical moment requires a more deft approach. The NBA thus has responded proactively,  ostensibly condoning but actually has containing the impetus of the protest movement. And, somewhat more sinisterly, has commodified it.While the Atlanta Hawks may not directly accrue significantly more profit through the Unity Game, the game aims to enhance the team’s social justice cred. Hawks CEO Steve Koonin admitted as much, stating, “We have a brand promise to entertain and unite the city of Atlanta and think out Unity Game is another great step toward keeping that promise.”  The Memphis Grizzlies’ MLK50 Pride uniform represents a similar effort.

The Hawks’ and Grizzlies’ initiatives began before the anthem protest movement rose to prominence, but, coincidentally or not, the teams announced them at the height of the backlash to Kapernick.  The timing permitted each organization seemingly to express solidarity with Kapernick and the other athletes who have joined him, even as the messaging of both these efforts dodge the issues at the crux of the protest movement. Furthermore, these proactive actions have allowed the teams, as well as the league at large, to establish control the of narrative.  The NBA, as a black sport populated by black players, appears to have the potential to increase the urgency of the athlete protest movement.  Instead, team and league officials, governed by the “white basketball unconscious,” have attempted to snuff out this possibility.  Yet, realizing the cultural power of the league’s black players, the NBA has taken advantage of this cultural capital to use players of color to promote a relatively conservative message of interracial unity all while profiting from supposedly racially progressive proclivities. 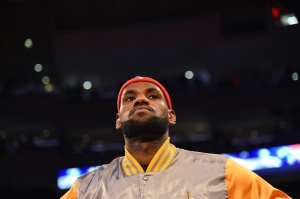 LeBron James will continue to stand for the national anthem.  Image courtesy of gettyimages.com.

However, although many players appear to have endorsed the league’s message, the potential remains for players, as well as coaches, to contest the preferred narrative. Notably, the athlete who most embodies black autonomy – LeBron James – has expressed his intent to stand for the national anthem in the same way he always has done.  Throughout his career, James has proven himself an acute strategist, always choosing to act or speak on his own terms. Thus, it seems unlikely James has not put thought into what he will do during the anthem.  By choosing simply to stand, he resists co-optation by the league.

David West, now with the Golden State Warriors, has long stood two-feet behind his teammates during the anthem, a subtle action that demonstrates his refusal to fully honor that flag of a nation that does not fully respect the rights of black citizens. The NBA’s emphasis on unity gives West’s demonstration more power.  His separateness represents the unique inequities born by black Americans, making symbolically visible the realities the league aims to obscure through the discourse of unity.  He thus embodies a counter to the NBA’s preferred vision of unity. Possibly, he will inspire other players to make similar actions that together can disrupt the league’s narrative of unity.

NBA coaches also have emerged powerful disruptors of the league’s priorities.  Steve Kerr, Gregg Popovich, and Stan Van Gundy all have made strong statements that refocus the conversation to racial injustice.  In the aftermath of the murder of Terence Crutcher by a policewoman in Tulsa, Kerr asserted, “No matter what side of the spectrum you’re on, I would hope that every American is disgusted by what is going on around the country.” Popovich stated, “It’s difficult for many white people to understand the day-to-day feeling that many black people have to deal with. It’s not just a rogue policeman, or a policeman exerting too much force or power.”  And Van Gundy likewise said, “To me, in some ways, [police brutality is] just the most visible to focus on and it goes to deeper inequities in our criminal justice system, our education system so there’s so much to focus on.”

As Kate Aguilar argued, white allies play an integral role in the athlete protest movement.  By using the space afforded by white privilege, white players and coaches can take more assertive stances, just as Kerr, Popovich, and Van Gundy model.  White recognition of black experiences productively troubles the “white basketball unconscious.” These coaches draw attention to the fact that race determines experiences, both on the basketball court and off.  The coaches speak what the NBA has chosen to silence.  The league’s call for unity implies  a reason for such calls, but the reason remains unaddressed. The coaches, in contrast, directly address the problems of racial bias that require redress before unity can be achieved.

The fact that these three men are three of the most respected coaches in the league lends further significance to their statements.  Their statements create a structure of permission for their players similarly to voice their opinions.  Draymond Green did so. Hopefully others will follow.  If so, spoken words rather than symbolic actions may represent the NBA’s contribution the new “revolt of the black athlete.” As Green said, “I don’t need to take a knee to say it. I’ll just say it. It’s [meaning police brutality against black Americans] messed up.” Green’s unscripted commentary protests the NBA’s scripted displays of symbolism.

This collection of actions and statements by players and coaches serve to expose the hollowness of the league’s message of unity.  While unity in and of itself is a commendable goal, the league’s desire to brand itself as socially woke requires reckoning with racial inequality. Yet, the NBA has proven trapped by the demands of the “white basketball unconscious.” The actions of NBA athletes and coaches, however, can make sure that this basketball myth does not abide. James, West, Kerr, Popovich, Van Gundy, and Green demonstrate the various possibilities for reclaiming the athlete protest movement from the league and, more importantly, returning the conversation to police brutality against black Americans and other forms of racial injustice.

Cat Ariail is a PhD candidate in the Department of History of the University of Miami. She researches gender, race, and nationalism in mid-twentieth track and field. You can contact her at cat.m.ariail@gmail.com.

4 thoughts on “Unity and Protest in the NBA”