Jessica Luther didn’t intend to make a career at the intersection of journalism, college football, and sexual assault. But not long after she started her sports blog, Power Forward, in 2011,[1] she began to notice something: no one was stationed there. Instead, most of the time when athletes were accused of sexual assault, a familiar pattern of behavior followed: local sports media would minimally cover the allegations, coaches and athletic administration would attempt to limit their impact on playing time, fans would ignore or even attempt justify them, and everyone, seemingly as soon possible, would attempt to “move on.”

“Where is the media?” Luther asked in a post on Power Forward in September 2013. Why were these serious allegations so easily discarded from the national conversation about college sports? Conducting a simple search for “rape” on ESPN.com yielded her a simple search for “rape” on ESPN.com and returned 762 items. “Sexual assault” yielded 775, with 314 popping up for “domestic violence.” Was this a large number? “[It] seemed like a lot to me until I searched ‘concussions,’” Luther wrote. “Concussions” returned 5018. “Brittney Griner” returned 1163 hits (PF 9/24/13). Concerned by this relative lack of attention, Luther began keeping her own list tracking sexual assault cases involving NCAA athletes, with links to whatever media coverage she could find for each case. From time to time, she published updated versions of this list on Power Forward. Certain cases, like those involving the football teams at Vanderbilt, the U.S. Naval Academy, the University of Montana, and BYU, were chronicled in standalone posts on her site. In addition, as Luther’s career as a freelance journalist developed, much of her writing on sexual assault in college football was published in other venues, like Sports on Earth, The Nation, and VICE Sports. Before long, she had become recognized as an expert on the subject. 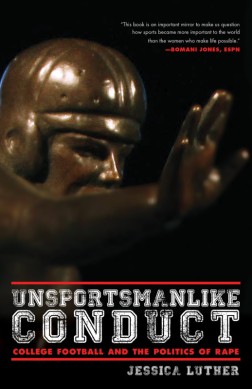 Luther’s recognition of this significant lacuna in national sports media discourse and her diligent reporting on it would have been enough to power Unsportsmanlike Conduct: College Football and the Politics of Rape, her new book from Dave Zirin’s “Edge of Sports” imprint for Akashic. But what really invigorates the text, what drives home the importance of her work for anyone inclined to turn a blind eye to injustice when it comes to their own favorite football program, is the story of how reporting on the Jameis Winston rape case (beginning in November 2013) forever altered her fandom for her alma mater, Florida State University. “I was born with garnet and gold blood,” Luther writes to open Unsportsmanlike Conduct, “Both of my parents graduated from [FSU]… When it came time to go to college, I only applied to one school. And during the four years I was at Florida State, I went to every home game… I used to be a really good FSU fan” (p. 21). This opening vignette, originally published as part of an article for Sports on Earth titled “The Hazy Middle,” both establishes her personal fan bona fides and, more importantly, demonstrates how close attention to the mishandling of the Winston case by the university and Tallahassee police led her to a broader, even more significant revelation.

For, despite the personal impact the Winston case had on Luther’s fandom, Unsportsmanlike Conduct

is not a book about Jameis Winston. This is not even a book about football players. This is a book about the intersection of college football and sexual assault, and the people and systems that ignore, minimize, and even perpetuate this violence; the Winston case just happens to be a thorough and high-profile example of what that intersection looks like (p. 24)

After drawing her reader in, presenting them with a personal fan narrative and perhaps setting their expectation that this book will be primarily grounded in Winston’s particular story, Luther flips the script. Part of the problem, as she deftly points out throughout the rest of the book, is the assumption that the circumstances surrounding rape cases involving college athletes are distinctly personal: individual, unique, based in specific narrative details, featuring distinct actors, programs, and audiences. Rather, Luther asserts, what we’re dealing with is a systemic issue, and an intersectional one. We cannot separate or cordon off these individual cases from each other, nor can we ignore the common mechanisms by which universities, the media, and indeed broader cultures of celebrity and misogyny, cover up and minimize them.

To articulate the interconnected nature of sexual assault cases in college football, and to demonstrate that interconnectedness for a popular press audience unlikely to be receptive to academic jargon, Luther structures Unsportsmanlike Conduct as a “playbook.”[2] This defining metaphor allows her to emphasize that the mechanisms for impeding justice and distracting the public come from above: from athletic and university administration as well as coaches. It also allows her to highlight that these deflective directives are pre-scripted and followed as a manner of routine. To make her case, Luther relies on the newspaper archives she collected for her blog as well as her original reporting on high profile cases—most notably the rape case at Baylor that cost coach Art Briles and university president Ken Starr their jobs. She highlights the often-eerily similar circumstances surrounding the nature of the incidents (almost always involving multiple perpetrators and intense intoxification), their handling by universities and police, and the intimidation of victims. Luther also puts in stark relief the way that the NCAA and national media absolve themselves of responsibility for the actions of individual institutions even as they incentivize those institutions’ behavior with massive payouts for football bowl games and the NCAA men’s basketball tournament. Finally, and perhaps most significantly, Luther presents the playbook as it “could be”: a look at how these cases should be handled and how they could be prevented in the first place (p. 153).

Concluding with the hopeful assertion that the college football powers are “forging new plays because we are forcing them to, and for once that means considering the consequences that rewrite the order of things, putting potential victims above winning on the field,” Luther returns to her own fan narrative and asserts “I need… new plays and I need them now. I need to know that the sport I love sees sexual assault and rape as unsportsmanlike conduct, as fundamentally opposite to the spirit of the game” (p. 222-223). It is not enough for Luther to publish Unsportsmanlike Conduct as a piece of reporting on the sexual assault crisis in college sports, and to convincingly demonstrate therein that these cases are systemic. To do so would be to ignore or deny her own stake in that system. Powering forward, as the name of her now-largely defunct blog indicated, is Luther’s mission—as a feminist, a journalist, a fan, and a person—and Unsportsmanlike Conduct is a tour de force in that regard.

To close, I would like to situate Unsportsmanlike Conduct as a work of sports studies. As mentioned earlier, despite Luther’s academic instincts and credentials, this is not a book that aims to be a work of scholarship. In this case, that’s a good thing: this is an urgent public issue with broad ramifications, and everyone—fans, university administrators, and academics alike—needs to recognize their stake (willing or not) in a system that values athletic narratives and the revenue they produce more than victimized human beings. And whatever its pretensions or intended audience (it does feature endnotes, for whatever that’s worth), Unsportsmanlike Conduct is worth teaching in the sports studies classroom. As it did for Harry Edwards in Revolt of the Black Athlete (1969) and William Rhoden in Forty Million Dollar Slaves (2006), Luther’s personal narrative only serves to deepen and intensify the reader’s understanding of the vast inequities present in the sports-industrial complex. It is a tremendously generative text, suitable on undergraduate and graduate syllabi, likely to spur animated discussion in sports-and-gender seminars as well as thematically broad sports history lectures.

Noah Cohan is a Lecturer in American Culture Studies at Washington University in St. Louis, where he received his PhD in English and American Literature in 2015. His book project, “We Average Unbeautiful Watchers”: Fan Narratives and the Reading of American Sports, is under contract with the University of Nebraska Press. He is the co-editor of Sport in the University, a special issue of the journal American Studies, forthcoming in fall 2016, and the founding coordinator of the Sports Studies Caucus of the American Studies Association.

[1] Jessica Luther’s work on Power Forward is the subject of a chapter on sports blogs in my forthcoming book, “We Average Unbeautiful Watchers”: Fan Narratives and the Reading of American Sports, under contract with University of Nebraska press. Portions of this introductory text appeared in a slightly different form in the dissertation that has become that book project.

[2] Luther is herself a former academic, having attended the graduate program in History at the University of Texas at Austin.

22 thoughts on “Review of Unsportsmanlike Conduct: College Football and the Politics of Rape”