At Super Bowl I, then known as the AFL-NFL World Championship Game, the Green Bay Packers easily handled the Kansas City Chiefs, 35-10. As a result, many believed that the fledgling American Football League (AFL) was no match for the dominant National Football League (NFL). Two years later, however, at what would become Super Bowl III, the AFL’s New York Jets, behind the athleticism and bravado of Broadway Joe Namath, took down the projected winner Baltimore Colts, cementing that the AFL was, in no terms, a secondary association. A team winning a single game, for some, legitimized the league. 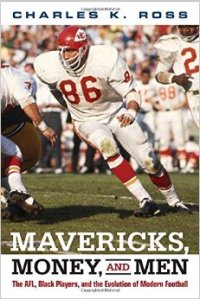 But it wasn’t that simple, argues historian Charles K. Ross. In Mavericks, Money, and Men: The AFL, Black Players, and the Evolution of Modern Football, Ross clearly frames how the AFL contributed to the transformation of professional football from a mid-tier sport to the dominant position it currently holds in the American sport marketplace. He argues that that two key initiatives of the AFL helped create the current aura around professional American football. First, the AFL, more than the NFL, provided a space for black American athletes to showcase their football skills. Second, AFL owners made a monumental decision when they opted to share television wealth. These two changes encouraged the NFL, before and after the merger, to follow suit. Therefore, the AFL must be considered as an important ingredient to the late twentieth and early twenty-first century successes of the NFL.

Mavericks, Money, and Men is strongest in its narratives of black players who struggled to enter the hostile world of white professional football. The NFL had a so-called “gentleman’s agreement” that held non-white players out of the sport from 1933-1946. After that, black players in the NFL and the All-America Football Conference entered the league, as pressures from the post-World War II era forced them to begin desegregating. But, as Ross points out, through 1949, the NFL never brought in players from historically black colleges and universities (HBCUs). From the beginning of the AFL, however, HBCU players found opportunity in the league. “In essence,” he contends, “AFL teams from their inception had African American players on their rosters from black schools, which helped facilitate a stronger identity with this population of athletes” (p. 8).

The AFL provided a space where black players could succeed more than they could in the NFL. Previously understood facts about the AFL make this a strong argument. In detailing Marlin Briscoe’s plight in becoming the first black quarterback to start a professional game in the AFL or the NFL (when he did so for the Broncos in 1966) and noting the fact that the Kansas City Chiefs became the first team to have more than half of its starting positions taken by black players, Ross shows how revolutionary the league was.

Furthermore, and perhaps more importantly, Ross includes many narratives of black player involvement that haven’t always appeared in other histories of professional football. For instance, readers learn of Ernest “Big Cat” Ladd, the great defensive tackle from Grambling State University. Ladd played for the Chargers, Oilers, and Chiefs of the AFL during an illustrious eight-year career. Aside from his athletic ability, he stood up against white norms when he refused to cut his beard. This was, as Ross points out, a “time when most professional athletes were not permitted to wear facial hair” (p. 99). As Ross quotes from the Pittsburgh Courier in 1966,

[T]he commissioner can’t tell me how to do my face. Nobody can make me close my mouth. When I signed my contract I didn’t sign a contract for voice or speech, I signed to play football (p. 99).

These details from players of the AFL who played at HBCUs are important additions to the historiography of both race relations in football and the emergence of the modern game.

Ross also provides interesting, and overlooked, insights into the AFL’s relationship with the media. He correctly argues that the league helped usher in a new era  when the owners decided to share television revenue. But another interesting, and perhaps more novel, aspect of the work was his argument that the 1962 double-overtime AFL Championship game between the Dallas Texans and the Houston Oilers receives as much credit as the 1958 NFL Championship game for helping expand the sport’s marketplace.

Millions watched as both teams fought in the longest pro football game ever. Undoubtedly this sport infatuated Americans, and it meshed very well with television (p. 164).

While scholars argue over just how much one single game (whether the 1958 bout or the 1962 contest) played in the popularization of professional football, contemporary histories tend to overlook the influence of the AFL championship games.

Mavericks, Money, and Men offers important analysis of the accolades that black players and television deals made for professional football in the United States. The work is weaker, however, in other areas. While Ross provides important context about the broader social movements occurring at the time of the AFL’s emergence, at times the juxtaposition of the narratives and the larger historical context seems disconnected. For example, in the discussion of the 1965 AFL All-Star game boycott, Ross states that “Events in mainstream America clearly had an impact on African American players in the AFL” (p. 80). Yet, there is not enough evidence of this direct connection. Certainly, the simultaneous actions in the broader Civil Rights movement and the black AFL players’ revolts seems to point to a linking, but more specific examples of this connection could provide readers more insight on the effects of both the Civil Rights movement and the players’ boycott.

Nevertheless, Mavericks, Money, and Men, offers important insight into black players’ involvement in the transformation of professional football in the United States. It also shows how the television deals that are so praised in histories of the NFL pay homage to the business side of the AFL. Without the emergence of this league, and the competition it created between it and the NFL, the league, perhaps, might not sit so far atop the American sport hierarchy that it does today.

Andrew D. Linden is an Assistant Professor of Sport Management at Adrian College. He is the co-editor of Sport in American History. He can be reached at alinden@adrian.edu and can be followed on Twitter @AndrewDLinden. Check out his website at http://www.andrewdlinden.com.