The 2006 Disney biopic Glory Road narrates the unprecedented championship run of the 1965-1966 Texas Western Miners basketball team, in which a white coach, Don Haskins, heroically starts 5 black players en route to a shocking victory over Kentucky. There is an intriguing scene where Haskins (Josh Lucas) attempts to recruit Bobby Joe Hill (Derek Luke) after an all-star game where Hill plays limited but impressive minutes. Hill is initially uninterested in Haskins’ pitch, responding instead with grandiose plans to become “the next Smokey Robinson” rather than Haskins’ “token Negro.” Then follows this dialogue:

DH: You talk a good game, Hill. But I didn’t come to find a player I could sit on the bench. I intend to start you – start NCAA Division 1 ball –

BJH: What is it with you, mister? I’ve accepted it. What are you smokin’?

DH: I ain’t smokin’ nothin’, son. Now you just told me about a big ol’ dream you have. I can let you play. I can help you make your dream come true faster than a twister’ll take your socks off.

BJH: You gonna let a black player play from the get go?

BJH: (Long pause) So, what is this team, anyway?

There is a presumably substantial shift in Haskins’ attitude by the climactic moments of the film, when he sits the team down and tells all, black and white, that he will only be using the black players in the championship game. Race now is all that matters. The white players respond with grace, recognizing the momentous occasion and choosing to support their brothers.

Aside from the typical Disney brand of sports biopic emotionalism, these scenes convey a prevalent and problematic idea that many films, books, and articles on race and sport continue to propagate, namely, that racist ideology is overcome by a demonstration of acceptance by a strong white individual or group and a display of usefulness by the black participants. Such a theory, though accepted by many, does not get to the root of racist ideology and the refusal of many white people to recognize the intrinsic value of blackness and the humanity of black persons without qualification.[1] 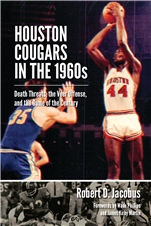 This includes the recent volume released by Texas A&M University Press and author Robert D. Jacobus, Houston Cougars in the 1960s: Death Threats, the Veer Offense, and the Game of the Century. Jacobus argues that the city of Houston and the University of Houston deserve more recognition for the integration of the South.[2] He is particularly interested in the coaches who recruited the black players to the university, arguing, “They were picked not to fulfill a quota or merely signal an end to segregation in the South’s largest segregated city; they became Cougars because these coaches cared nothing about the color of their faces and everything about the talent God gave them and the further development of that talent that could help a team win some football and basketball games.”[3]

Jacobus interviewed hundreds[4] of coaches, players, and other non-athletic participants, and narrates the events surrounding their stories. The chapters are thematically organized, though the ordering is also chronological. The early chapters give attention to the city of Houston itself and the experiences of the early black athletes in the 50s and 60s. Accentuated are the hostilities black athletes and their white allies faced in hotel accommodation,[5] fan conduct,[6] and officiating.[7] The focus then shifts to the beginnings of integration, the exit of superstar players, and coaches who challenged the status quo of recruitment and strategy. The next several chapters narrate the activity and experiences of Cougars superstars like Elvin Hayes, Don Chaney, and Warren McVea. The final chapters examine the lead up and events of the historic Game of the Century between the 1967-1968 Cougars basketball team and the UCLA Bruins, with John Wooden coaching the then-named Lew Alcindor (Kareem Abdul-Jabbar), as well as the Bruins’ revenge in the NCAA Tournament. Throughout, attention is given to the experiences of the black athletes and the pioneering actions of their coaches.

Jacobus’ work is significant and helpful in its impressive research. The interviews with former players, coaches, administrators, and community leaders are invaluable to researchers and interested readers. It carefully demonstrates the ways sport can influence society through the analysis of the direct influence the University had on its city.

However, I find the underlying assumption with which Jacobus writes unconvincing in his effort to distinguish Houston from the rest of the South in the push for integration. The early pages make clear that Jacobus values the utilitarian approach the coaches had in their relations with black players.[8] Among the key problems with this understanding is that it still places the authority and privilege of adjudicating worth and dignity on white people. Black players were allowed to go to college in Houston because of their talents and usefulness to program-building, not because of their intrinsic worth. However progressive such ideas may have been at the time, they still did not address the real problems of racism. Jacobus’ analysis ends with an integrated University of Houston having athletic success, but this does not mean integration was successful in ending racism. The utility mindset is still seen in problematic activities like the NFL Combine, where increasingly more and more black bodies are evaluated for their usefulness to pro football teams. By continually narrating the fight for integration as a push for the recognition of the utility of black people without also demonstrating the problems with these assumptions that continue to plague the United States and the sporting world, Jacobus fails to demonstrate how the Houston Cougars were truly unique in the fight to integrate the South.

Alex is a PhD student at the Nazarene Theological College and the University of Manchester in Manchester, England. His academic interests include American religious history, Alaskan religion and culture, pop culture and religion, and sports and religion. You can contact him at algparrish91@gmail.com.

[1] Even this statement demonstrates the problematic assumptions white thought about race and race relations communicates, i.e., that white people are in a luxurious position to either accept or reject the humanity and worth of black people with little consequence other than increased or diminished public perception.

[8] This sentiment is echoed in both forewords by Wade Phillips and James Kirby Martin.