The NFL Combine is currently underway at Lucas Oil Stadium in Indianapolis, IN. The annual event is billed as a showcase where players exhibit their talent and skills in front of scouts and team executives in hopes of increasing their draft stock. It is an important event for the league as it sets the tone for the much-anticipated NFL Draft in April, and fills dead-space during the offseason. In short, the Combine keeps fans thinking and talking about the NFL despite the fact the season doesn’t begin for another 7 months.

Central to the Combine’s purpose are numbers and narratives. Sports pundits, such as ESPN’s Mel Kiper Jr., rely on the event to develop elaborate draft boards and spin narratives about each players’ future potential. The event produces a cacophony of statistics that enable fans, scouts, and media to discuss a player by quantifying their value effectively divorcing their talent from their humanness. The NFL Combine is in the business of dehumanizing players so teams can make unbiased comparisons and decisions, allowing them to focus on their value to a multibillion dollar industry. For many, the Combine is the great equalizer where numbers serve as a color blind measure of the potential value of labor in late-capitalism. 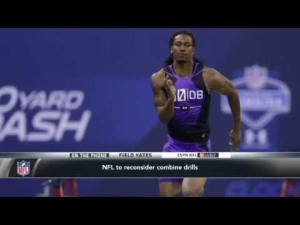 At the Combine, players are studied through a variety of tests and physical examinations. We learn their height and weight, body mass index, vertical and horizontal jump distances, 40-yard dash time as well as observe their strength in action. Crowds of scouts and evaluators watch as players bench press and squat heavy weights, run routes, throw and catch passes, tackle dummies, and participate in a variety of other activities. The end goal of each of these demonstrations is, as the NFL Combine website explains ”to ascertain medical information on the top draft eligible prospects in college football.” Beyond just judging the medical condition, however, team officials and media grade their performances, creating a hierarchy of talent and skill. The sum of the each demonstration, test, and examination is a single grade.

Inspection of a slave for sale. Image from Wikimedia Commons.

Grading athletes and examining their physical specifications seems to make sense. After all, they’re athletes that rely on their strength, speed, endurance, etc. to make a living entertaining fans by winning games. Yet, in a racialized world where the majority of players are African American, and the team owners, scouts, and coaches are mostly white, a week-long exhibit of talent and bodily inspections feels uneasy. Indeed, while I’m hardly the first person to make this observation, there is an eerie similarity between the examinations and scrutinization of the bodies of NFL players at the Combine and the slave market. Slaves too were chosen based on their size, skills, and talent to contribute their labor to vast money-making enterprises. The Combine is the pre-auction display, where scouts decide how much they value individual players through grades, before later selecting them in the draft in hopes that they will increase the profitability of their team. While it is true that NFL players are well-paid (the league minimum for 2016 is $450,000), the combine perpetuates a culture of exploitation where white men assign value to African Americans based on inspections of their bodies.

As if dehumanizing players with grades based on physical attributes wasn’t enough, in recent years the Combine has begun to consider the “mental” make up of players, too. Exams like the Wonderlic test for cognitive ability add another statistic to burgeoning profile of prospective NFL draftees. More disturbing, however, are the interviews conducted by team officials. To mitigate future problems — like anger management, drug abuse, domestic violence, and so on — teams have begun asking a barrage of strange, and frankly, racist questions. Teams, for whatever reason, are trying to play amateur psychologist, hoping to uncover the inner character of players. Former NFL defensive lineman, Austen Lane, gave an example of some of these question recently on Twitter. They included questions like: “I see you have dreads, you smoke weed don’t you?” and “do you find your mother is attractive?” Dez Bryant was also asked outlandish questions, including if his mother was a prostitute. Geno Smith reported being asked “What’s the drug of choice on your campus?”

When a coach made the statement during my combine interview… “I see you have dreads, you smoke weed don’t you?” pic.twitter.com/fu2BLm55uF

Within these questions we see strange and offensive stereotypes about players’ backgrounds. There is an assumed culture of deviance and disadvantage that often says more about the evaluators than the players. The questions illustrate the NFL’s CYA (cover your ass) obsession that relies on a clear distinction between the culture of upper management and its labor force. Indeed, rather than making a real attempt to cultivate relationships with players and create an opening and supportive environment, the Combine shows the NFL’s attempt to weed out bad apples by isolating the most vulnerable.

We need to make sure the men of this league are treated as businessmen. During interviews, our players and prospective players should never be subjected to discrimination or degradation stemming from the biases or misconceptions held by team personnel. NFL teams cannot have the free reign to ask questions during the interview process which can be categorized as stereotyping or which may bring a personal insult to any player as a man.

The league and its evaluators disagree, of course. They counter by saying that these questions are about preparing players for the intrusion of the media, and better understanding their background and what make them “tick.” They also are alleged to reveal a player’s intangibles and leadership potential. This is particularly important to them in era where off-the-field incidents are increasingly becoming an issue. Look no further than players like Aaron Hernandez, Johnny Manziel, and Greg Hardy to see why such questions persist. The league and its owners need to make smart investments that protect its image and best give their teams the chance to win. CYA, indeed.

The numbers created and narratives spun at the combine dramatically affect the future of NFL players. Their performances and answers to questions affect their draft position, which in turn affects how much they are paid.The draft helps shape whether players are viewed as booms or busts, leaders or followers, and winners or losers. Together, the Combine and the Draft define a player and set expectation before they take the field. Similarly, narratives of their performance often linger on, framing discussions of their career and perceptions of their value (e.g did they under perform).

While the NFL Combine creates a statistical baseline and spins narratives that follow players throughout their careers, it also provides a language and a framework for fans to dehumanize players. While stories about leadership and behavior are familiar to most fans, either from media stories or their own playing days, the vast statistical analysis of players is a new invention. Statistics provide a means for fans to distinguish between performance and behavior, allowing them to distance themselves from things like players’ domestic violence issues as long as the numbers add up. The Combine (along with the NFL draft) serves as a form of pedagogy, instructing fans on how to understand the world of evaluating players and assigning value to their statistics. It also teaches us about the process of creating draft boards and recognizing talent.

A Fantasy Football Draft Board. Image from Wikimedia Commons.

Until recently, few fans worried about creating their own draft boards or evaluating future talent. We didn’t draft players and mostly trusted our team’s front office to do its job. Fantasy sports, however, have changed that. Today, fans participate in their own drafts as they try to assemble the best statistical team possible in order to beat their friends and family (possibly earning money) in fantasy football. In this world, evaluating talent and understanding statistics is incredibly important. The value of players is solely based on their numbers, removing the human element from the game.

Thinking of athletes as real people forces us to address the tensions of watching real people participate in a violent sport, destroying their bodies, for our entertainment. Looking at them only as numbers, however, allows us to avoid the uncomfortable ethics of watching football or dealing with their off-the-field behavior. This is perhaps why fantasy football continues to grow in popularity amidst the increasing data pointing to the long-term danger of playing football.

We’ve entered a new era where players are no longer our favorites because of their personalities or game winning plays, but because of their statistical accomplishments. The NFL’s reshaping of its rules to protect quarterbacks has also increased offensive production, providing fans more excitement as they track the numbers each week. I do not mean this post to sound nostalgic for the good-ole-days of smash mouth football. I’m also not admonishing the value and importance of statistics in the life of sports fans (I’m personally a big believer in baseball’s sabermetrics). I am, however, suggesting that the increased use of numbers and the rise of fantasy sports have created a new culture of fans that dehumanizes players and constructs an unhealthy culture of ownership in an arena of American life with an already complicated relationship with race.

The dehumanizing language of numbers stems from events like NFL Combine and it’s uncomfortable similarities to slave markets. Inspections and examinations give us a language to valuize bodies for our own gain. This is evident not only at the NFL Combine and on Draft Day, but also in Fantasy sports. Fantasy football, and its associated daily fantasy gambling sites, are built on a language of numbers and a statistical understanding of value. They peddle a perception of players as statistical machines that put cash in your pocket. We then label ourselves as fantasy “owners” and benefactors of their talent. We become plantation owners that commodify players as tools of production for our statistical satisfaction. Add in the profit motives of Daily Fantasy bets or prize money from our leagues, and we reap the rewards of late-capitalism built on the backs of racial minorities.

None of this is illegal, of course, but the re-inscription of the language of ownership, the dehumanizing of mostly minority players into statistical tools, and the profits we earn while doing no work, is eerie. The NFL Combine is step one in this process of creating value, learning the numbers game and dehumanizing players, and building the new fantasy plantation.

Andrew McGregor is a PhD Candidate in the Department of History at Purdue University, where he teaches courses in history and African-American studies. He is also the founding co-editor of this blog. You can reach him via email at amcgrego@purdue.edu or on Twitter:@admcgregor85

8 thoughts on “Constructing the Fantasy Plantation: The NFL Combine and the Language of Numbers”