Asian American Basketball: A Century of Sport, Community, and Culture, by Joel Franks, examines the intersection between race, ethnicity, gender, and sport.  While Franks notes in his preface that this book draws from the buzz that surrounded Jeremy Lin when he was drafted to the New York Knicks in 2012, his work does not necessarily address contemporary professional Asian American basketball players. Rather, Franks traces the history of Asian American basketball, with an emphasis on community, amateur, collegiate, and professional ball in mainland United States and Hawai’i through 1965. He illustrates the ways in which male and female Asian American sport participation has always been present, though often overlooked by sport studies scholars. Geographically, the book situates its findings between the continental United States and Hawaii. Most of Franks’ emphasis on the United States focuses on the West Coast, particularly Asian American communities in the Bay Area and the Pacific Northwest. However, some attention is paid to the Midwest and Northeastern parts of the United States.  Franks’ attention to the history of Asian American participation in basketball illustrates the ways in which sport has been used to both establish ties within and between ethnic communities, as well as highlight the impact of systemic racial discrimination. 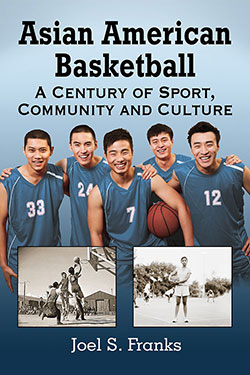 The first two chapters focus on the importance of community basketball on both mainland United States and Hawai’i before 1965. Asian American Basketball illustrates how “Asian Americans established durable community institutions and practices, including basketball teams and leagues” (p. 25). While Franks does explore some adult leagues, a majority of the first two chapters focuses on youth leagues that arose from the Young Men’s Christian Association, the Young Women’s Christian Association, the Chinese Playground, the Young Men’s Buddhist Association, and the Young Women’s Buddhist Association. These chapters argue that athletic participation within these organizations helped form an identity of ethnic belonging and cultural citizenship. These organizations also gave space for girls to engage with sport. For example, the Chinese Playground, a space established in San Francisco’s Chinatown,“was one of the few spaces where girls could strengthen their athletic skills” (33). In addition, attention is paid to Asian American players who participated in high school and college teams as well. This emphasis on the history of youth sports in Asian American communities posits Asian American Basketball as an important text for Child and Youth Studies scholars.

As an academic in Childhood Studies, I believe this text was particularly useful in understanding the ways that young people use sport to navigate their communities. As illustrated through Franks’ work, for young people in Asian American communities, sport provided a way to establish community bonds, as well as develop intercultural socialization through competing with players from other ethnic communities, as the book later details. Franks notes that for Progressive Era reformers “one of the primary motivators of multiethnic basketball in Hawai’i was the use of recreation to ostensibly improve the lives of children from working-class, immigrant backgrounds” (p. 96). While this rhetoric is still used today, particularly around low income children of color and sport activity, it is important to trace the historical remnants of this philosophy as pertaining to the perceived moral ills thought to affect urban and immigrant children. As noted in the book, “reformers believed that…a youth with a baseball bat or a basketball was less likely to join street gangs or militant labor organizations and more likely to become a dutiful, patriotic American consumer and worker” (p. 27). In the eye of reformers, participation in sport also was a way in which Asian Americans could participate in American citizenship through recreation. However, as Franks’ argues, Asian American youth also negotiated the basketball court as a space in which they could have agency over their identity formation. Franks quotes Kathleen S. Yep’s,, a sociologist who studies Chinese American basketball, who states that “on the court they could challenge socially determined limits to their achievement and stake a place in the world as Chinese Americans and as working class youths” (33). While the book mainly focuses on the experiences of boys, sport as a vital part of identity and community construction was also part of the experience of Asian American female athletes as well.

In the following two chapters, Asian American Basketball focuses on intercultural basketball in areas such as the interscholastic school competitions, the military, and amateur basketball. Franks uses archival sources, such as sports writing from newspapers, to find evidence of Asian-American basketball. “Readers of post-World War II California sports pages could encounter Japanese and Chinese surnames suiting up for independent amateur teams,” he explains (p. 125). These amateur teams provided Asian American basketball players a chance to play both within their hometown and to travel to various different states. For example, the Hawaiian All-Stars basketball team toured the United States as a way of both highlighting their basketball skills, as well as serving as an arm of tourism. According to Franks, “Hawaiian business and political elites hoped that through sports such as basketball they could promote Hawai’i as a future state, as well as tourism to “land of Aloha” (p. 122). This example, as well as others in which players faced racism, shows the impact of Orientalism in the lives of Asian American basketball players. As Franks argues “Orientalism’s effort to exoticize Asians helped fashion them into strangers to American adherents. It made it easier to dehumanize Asian Americans. And it made it easier to marginalize their efforts to represent themselves as people both distinctive and similar to other Americans” (23). This becomes evident through racially inflammatory language used by sportswriters to describe Asian American athletes, and the internment of Japanese Americans during World War II. Franks gives examples of press coverage of Asian American basketball players that included a sportswriter for the Humboldt Standard “referring to the adult athlete as a “China boy” (125). The internment of 100,00 Japanese American citizens forcibly placed them in camps in the United States. Although there was casual participation of basketball at the camp by internees, “several fine Japanese American basketball players were imprisoned..including Wally Funabiki, who played Stanford freshman hoops” (60).  The discourse of Orientalism in the sport press and imprisonment of Japanese Americans showed the limitations of sport as a way to participate in the American democratic system.

The work concludes with chapters that address Asian American collegiate and professional basketball. “Asian American College and Professional Hoops to 1965” highlights athletes who played for universities, such as the University of Hawai’i and the University of Portland. The chapter also mentions Wat Misaka, who in 1953 became the first Asian American to play professional basketball. Signed by the New York Knickerbockers, he also made history as “before that time, neither the Basketball Association of America nor its rival, the National Basketball League, had a person of color on a roster” (p. 177). Misaka’s position as a Knick was short lived and he only played a few games before being cut. The next chapter “Asian Hoops and Cultural Democracy Since 1965” notes the experiences of Jeremy Lin, but also mentions WNBA players of Asian descent including Leilani Mitchell. Franks also notes the experiences and lack of representation for administrators and coaches in college and professional basketball.

Overall, Asian American Basketball provides a strong historical context for understanding the role of basketball in Asian American communities. While there is some attention to paid female athletes, most of the archival sources reveal the role of girls sporting experiences in organizations such as the YWCA during the early to mid twentieth century, rather than schooling. As Franks notes, “in mid-twentieth-century America, secondary schools generally marginalized girls’ basketball” (137). Later, Franks does detail the impact that Title IX had on Asian American girls and mentions the increase in sport opportunities. I would also argue that this book is important for historians of childhood and youth, particularly those interested in sport and recreation. As the field of sport studies grows, I hope to see more regarding the intersection of Asian American studies and sport.

Samantha White is a doctoral student in the Department of Childhood Studies at Rutgers, The State University of New Jersey-Camden. She researches cultural, historical, and literary studies of sport and childhood. She can be reached at Samantha.white@rutgers.edu.