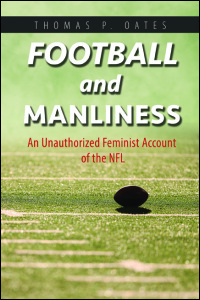 In Football and Manliness: An Unauthorized Feminist Account of the NFL, Thomas P. Oates  challenges the cultural politics of the National Football League. Oates uses feminist theory to reveal how the United States’ most popular spectator sport serves as a location for males, but particularly white males, to exorcise the anxieties and contradictions inherent in contemporary masculinity.

Oates refers to the book as an argument rather than a search for a singular “truth.” Typically, football histories feature a player, team, game or season and provide an interpretation about the singularity of the performance compared to others in football history. This book does not feature any of the typical attributes, instead it examines how football is a cultural force that shapes how we understand gender and racial hierarchies. The author states that the NFL has served as a site for reasserting white male power in traditional ways since the 1960s, the sport and business have re-positioned it to make it more compelling in an era of profound cultural, economic and political change.  NFL’s cultural politics are particularly important today when white masculinity is both reasserting itself under President Donald J. Trump, and under siege from social movements seeking change.

The author finds four areas where the NFL performs this cultural work beyond the games played weekly in the fall and winter. The efforts occur in the movies and television shows about teams, during the off-season coverage of events like the NFL Draft, in books by the league’s top coaches and in its promotions for digital games. The football movies through the 20th century portrayed male collectives that produced the required unity to transcend the ordinary. This century those movies and shows contain female characters who try to upset the unity from the outside and black players upsetting that unity from within. In Any Given Sunday and Playmakers, white coaches become heroes who manage and accommodate the situation to get everyone buying into the “enduring” values of the game which remain associated with whiteness.

Oates also observes that these dramas and the NFL Draft and Combine reveal the threat of black male masculinity. Team officials, media commentators and fans all discuss draftees in terms of their physical structure and feats, framing them as commodities to be compared. Since the majority of these men are African-Americans this behavior carries links back to the slavery in United States history when black men (and women) were explicitly commodified. These programs with their overt discussion of black male bodies both reveal how intensively sexual white Americans’ relations have been to African-American people and display homoeroticism. Yet Oates asserts the white males in their looking, judging and admiring the black males draftees legitimate white male dominance while subverting the homoerotic pleasures.

The author also observes that football coaches in speaking engagements and in books offer football-themed takes on leadership strategies and self-development. This is particularly important in today’s highly volatile work environments. Oates illuminate how the works of coaches from Vince Lombardi to Bill Walsh and Tom Coughlin provide a masculine wisdom packaged for popular consumption. In the last section, the author examines how popular representations of football fans support masculinity today. He argues that fantasy football and other activities enable men to become a “financialized citizen,” who performs a lauded version of masculinity. The book effectively uses theory to validate its findings.

There are a few elements that the author could have added to strengthen the work. Although Oates analyzed the key television programs in the section on football teams, he left out several football movies that came out during the era, including The Replacements, and Invincible. Providing comparisons with the three other major sports in the United States developed and promote their versions of the draft, would have enabled him to show how the NFL Draft is similar and different in presenting hypermasculinity. In addition, I wonder if Oates’ perspective on the coverage of the Draft and Combine underestimates the focus given to the players’ athletic intelligence. Comparison in the realm of fantasy sport would also have provided revealing insights. Baseball has long had a very popular fantasy world for fans. Does it create a similar kind of “financialized citizen,” and do MLB leagues offer women and African-Americans more space to participate than Oates found among the NFL leagues?

Those of us grounded in gender studies would argue that U.S. history has been filled with battles among competing definitions of masculine behaviors. What makes that history interesting is detailing who supported the various positions and the agency individuals showed as they carved out a niche for their masculinity against effeminacy and the non-white as these factors were defined in that specific era. Sports have long played a significant role in the masculine definitions whether it was as “muscular Christianity,” or the implementation of color lines determining who was allowed to play the sport. A discussion of sports’ role in the maintenance of hypermasculinity throughout  late 19th and 20th century US history in the introduction might have made the case for the greater issues in the current climate stronger.

In his conclusion Oates mentions players such as Rosie Grier and Chris Kluwe have publicly refuted the dominant forms of masculinity that the mediated NFL conveys. He describes the efforts of journalists and filmmakers who have revealed the links between the league and the issues of domestic violence and concussions. His book fits with the efforts of these individuals and groups to expose the role of the NFL in the continuance of dominant hierarchies. Academics and others can join in this crusade. I am uncertain that once football is removed the replacement(s) would engender the type of behaviors that the author seeks.

Brett L. Abrams is a historian who has written four books on sports and popular culture. In his day job he preserves federal government electronic records for legal and historical purposes.