This Boxing Day (yesterday, December 26), like many millions of other Canadians, I sat on a couch surrounded by friends and family partaking in a very typically Canadian thing to do: watching hockey.

Every year I cannot help but fall for the hype – promoted endlessly on TSN during the weeks leading up to the tournament – over team Canada at the World Junior Hockey Championships. My memories of Jordon Eberle’s game-tying goal against the Russians in 2009, Jonathan Toews shoot-out winner versus the Americans in 2007, and the Canadian dominance of the 2005 tournament are as clear in my mind as if they all occurred yesterday. That said, please, do not bring up the epic 2011 gold medal collapse at the hands of the Russians. That wound may still take a few more years (decades) to heal.

Without a doubt, the World Juniors are, for this Canadian, a proud sporting tradition.

The patriotic fan in me is more than happy to leave it at that. Watching the hockey stars of tomorrow play for Canada is as much a holiday tradition as stockings, presents, and egg nog. The historian in me, however, cannot let such claims go without further analytical study. 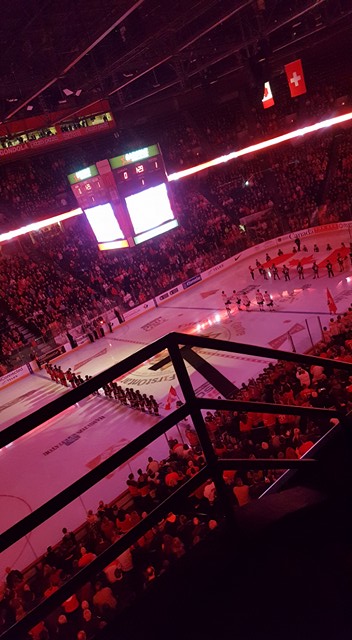 Over the years, Canadians have been inundated with rhetoric and language promoting the idea of the World Junior tournament as a ‘tradition.’ From mega-media corporations promoting that “A Hockey Holiday Tradition Continues on TSN ”[1] to the average blogger confessing that “whenever December rolls around … nevermind shopping, or champagne-popping, I’m thinking World Junior Hockey,”[2] many Canadians associate the tournament with the holiday season. It has always been that way.

The use of the term “tradition,” should lead any Marxist historian to Eric Hobsbawm’s enormously influential volume of essays, The Invention of Tradition. In it, Hobsbawn declares that “traditions which appear or claim to be old are often quite recent in origin and sometimes invented.”[3] Moreover, Hobsbawn defines these invented traditions as “a set of practices, normally governed by overtly or tacitly accepted rules, and of a ritual or symbolic nature, which seek to inculcate certain values and norms of behavior by repetition, which automatically implies continuity with the past.”[4] All I have to do to show the validity of this application of Hobsbawm to the World Juniors is ask my father about his experience watching the tournament when he was my age and younger. He has none.

Historically speaking, for a tournament that has been described as something Canadians have “always” partaken in, the ritualistic actions and emotions of the spectators and players alike in Canada are actually quite a recent phenomenon. The tournament, itself, was established in the late 1970s and did not  begin to reach the cultural zenith that it is today until the mid-to-late 1990s. The question that guides my interest in this topic is thus:  What was it that sparked Canadian interest in the World Junior tournament that allowed it to become the “tradition” we experience it as today?

There are a number of answers that have been given for this question. Many argue that they love watching the world juniors because of the nature of the Canadian junior hockey system. Players are from, and teams are located in, smaller towns across the country. Thus, for many there is a local connection that people have with the juniors that is absent once the players advance to the NHL. To see the players, with whom you have this connection with, play on the world stage is something that is often absent in other hockey leagues and tournaments.

That Canada has dominated the tournament historically, twice winning the gold five years in a row, is an easy answer to the question as well.[5] Would Canadians watch if their juniors struggled every year to win any medal let alone the gold? Every year there is a gold medal or bust attitude that sweeps the locker room and the nation. This makes the stakes very high for us Canadians year in and year out, which also makes it very compelling to continue watching the tournament with such vested interest.

And finally, the coverage and promotion that the tournament receives on TSN has no doubt allowed for its increased exposure to resonate on a much deeper level with Canadians. TSN bought the rights to broadcast the tournament in 1991 when the  network was just establishing itself on the frontier of cable sport broadcasting in Canada. The presence of the tournament on a network seeking public validation  gave the world juniors a platform which was all too motivated to promote its product.

But all of these reasons as to why the World Junior Hockey Tournament has become the “tradition” that it is today fails to find any significant root to the phenomenon. The notion of the connection between fans and local players might make the conditions ripe for sustained interest, but gives little indication as to why fans are interested in the first place. Canadian dominance makes it easy to come back and watch, but Canadian curlers dominate that particular sport  internationally as well, and yet, as Canadians, we do not view the World Championship of Curling as traditional viewing on the same level as the World Junior Championship in hockey. In fact, I couldn’t tell you when they are even held. It is often a pleasant surprise to find out that our curlers are competing on the ice somewhere in the world. And finally, the question must be asked: What value did TSN see in such a tournament to not only pay for the rights to broadcast it, but make it a central component to its holiday programming year after year since the early 1990s? What was the spark that allowed for all of these conditions to come together and create what has become our annual holiday tradition of watching junior hockey? A compelling answer to this question can be found in the small Slovak town of Piestany (formerly of Czechoslovakia), where, in 1987, the Canadian and Soviet national junior teams engaged in a now infamous (and for some, famous) bench-clearing brawl. Not even turning the arena lights off could stop the violence and mayhem on the ice.

The story of the brawl and the context in which it took place within the tournament is fairly well known. In an era where the medal rounds were decided by round robin, rather than the elimination format we know today, the Canadians were guaranteed a bronze medal heading into the final game against the Soviets. If they won by five goals or more, the Canadians would win the gold. The Soviets, on the other hand, had a disappointing tournament and were not in medal contention. Where one rival had nothing to lose, and the other a chance at gold, the game was expectedly rough from the outset. In fact, much blame for the incident has fallen at the skates of head referee Hans Ronning, whose inexperience, it is said, made him and his team incapable of controlling the rapidly deteriorating situation. Tensions among the teenagers on both sides were at a boiling point when, with six minutes left to play in the second period, and the Canadians up 4-2, Soviet Forward Pavel Kostichkin slashed Theoron Fleury across the side of his body. What began as a brush up between the two players quickly became a ‘punch-up’ involving both teams.

In the immediate aftermath of the brawl, both the Canadians and Soviets were expelled from the tournament, while all their games and records were expunged from the record book. The Canadians would give up their guaranteed bronze medal to the Swedes and Finland won the gold. It was as if neither team had participated in the tournament at all.

In Canada, reaction to the brawl was largely defensive and fueled by patriotic zeal. For every broadcaster, such as Brian Williams, who declared that, “I don’t care who started it, an ugly disgraceful incident has disrupted this hockey game,” there was a Don Cherry who retorted, “the Russians have nothing to lose, their laughing, this was planned no doubt about it.” Cherry would further this conspiratorial tone by stating, “you know whose fault it’s gonna be, it’s not going to be the Russians fault… it’s always Canada.” Canada’s top international hockey negotiator, Alan Eagleson, would further Cherry’s sentiment by alleging that “if we’d been in sixth place and the Russians were going for the gold, I wouldn’t have been surprised if they (the IIHF board) had found a way to continue the game.”[6] To summarize, the Canadians were robbed of a gold medal and the Russians lost nothing because they had nothing to lose.

One year later, in 1988, with the tournament hosted in Moscow, media attention was far greater and more intense than ever before. Whereas only one Canadian print reporter made the trip to Piestany, all major media outlets were present in Moscow.[7] The ‘punch-up’ had given Canadian hockey media and fans alike something to rally behind in the following years. The Canadians would go on to win gold, with much fanfare, in Moscow.

The significance in all of this goes back to Hobsbawm. We are told, and believe, that the World Junior Hockey Tournament is a Canadian tradition. Left unquestioned, this makes sense considering our love affair with the game of hockey. Canadians have always loved the game of hockey, so it would make sense that, as a nation, Canadians would ritualistically rally behind the best young players we have to offer as they take on the world every holiday season.

On the surface this is true. But when we go deeper and we line up this ritualistic behavior with its history, we see that the rhetoric does not align as perfectly with said behavior as we like to think. Would the World Junior Hockey Championships be as big an event as it is today for many Canadians had the ‘Punch-up in Piestany’ not occurred? That question may not have been definitively answered in the affirmative here. Much like a medical scientist, though, we have identified a correlation between the origins of a ritualistic behavior and an event. The correlation being that out of the act of unbridled violence- a hockey brawl deemed to be a “black eye” on the history of international hockey- a Canadian holiday tradition was born.

Andrew Pettit is at Western University, in London, Ontario.

One thought on “From the Punch-up in Piestany to Boxing Day on the Couch: The Invention of a Canadian Junior Hockey Tradition”