How appropriate during the year that Major League Baseball brought its All-Star Game to Washington, D.C., that a resident of the nation’s capital reviews a book populated by the All-Stars of the sports history filament. With his Replays, Rivalries and Rumbles: The Most Iconic Moments In American Sports, Steven Gietschier has edited that kind of book. 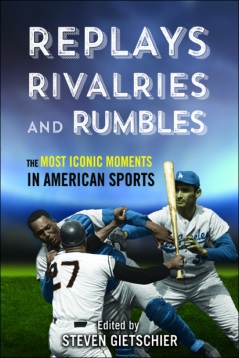 As promised these authors examine in twenty-three articles some of the United States’ sports most enduring controversies, events, and moments. Each article provides details about the moment in sport, then lays out the arguments that provide distinct and often conflicting interpretations of these moments.The authors then conclude with an interpretation deemed most accurate. A short list of recommended readings on the topic discussed in the chapter follows. The writing is as concise and sharp as one would expect from this team.

The application of the tool of memory as the lens through which to discuss these moments is an ingenious choice. Cultural historians have applied a focus on memory to understand the probable intentions of the creators of items ranging from documents to statues and public space.  One of the most effective recent examples features the examination of statues and public spaces dedicated to members of the Confederate States of America that were erected in the early part of the 20th century.

While most sporting games and events will not match the aforementioned statues in its cultural weight and effect, some of the moments covered in the book do. Because they covered Olympic related events, the articles about dipping the American flag by Mark Dyreson, the 1972 basketball final by Kevin Witherspoon and Stephen Hardy’s U.S. ice hockey victories all touch on how the citizens of the United States view themselves. American exceptionalism could also be gleaned from Thomas L. Altherr’s article on Doubleday and the “invention” of baseball. The limit to U.S. sports proves a missed opportunity as the inclusion of sports moments from Mexico and Canada would have provided some interesting comparisons on sports moments, mythic understandings, and nationalism.

A few other articles illuminated other sporting moments that held important meaning for sections of US citizens. David K. Wiggins’ piece on the reintegration of the NFL shows how the culture appears to need a white paternalistic figure to accompany its African-American sporting integrators. Meanwhile Maureen Smith’s piece on Althea Gibson and Lindsay Parks Pieper’s work on Babe Didrikson demonstrated the limits integrators can have and how they faced cultural narratives that tried to contain them.  Jamie Schultz’s work on the King-Riggs 1973 tennis match examines the probable effects the match had on women and sports.  Ronald A. Smith’s article on George Gipp and Andrew D. Linden’s work on “The Drive” show how these stories with their myths and interpretations that omit facts can influence the larger world’s perspectives on Notre Dame and on the city of Cleveland and its sports teams.

Among the articles focused on the development of leagues or famous figures in various sports, Samuel O. Regalado’s article on the Marichal-Roseboro Brawl and Michael Erza’s work on Ali-Foreman fight stood out. Both pieces offered new insights and provided unique perspectives on the brawl and about Muhammad Ali’s iconic status.

I would have appreciated if the editor added a summary that addressed the revelations from the articles to his afterward section. I also would have liked an introduction that provided the detailed rationale for choosing these particular moments and events. The editor mentions historian Stephen Wagg’s explanation that iconic moments featured great athletes and became mythic. The book contains seven works on baseball; the Olympics finishing second with four. The major college sports merited only one article each, along with the increasingly popular sport of professional basketball.

As an experiment, I approached five sports fans from different demographic groups individually and asked them what they viewed as a mythic sports moment. One mentioned Henry Aaron’s 715 home run, another selected Michael Jordan’s “flu” game, a third the Cavaliers comeback during the 2016 NBA Finals. These events seem to fit Wagg’s definition.