A few years ago, a popular brand of beer (associated with one of the Major League clubs) ran a commercial that demonstrated the dramatic demographic transformation that has taken place in the Majors over the past several decades.  At the commercial’s start, two “buds” (pun intended) are at a ballpark for opening day.  As the two teams line up along the base paths, the gentlemen comment on how wonderful and American is the great game of baseball.  The camera then pans across from behind the two teams, focusing on the athletes’ jerseys.  While the national anthem plays (as I recall, everyone stood) we catch a glimpse of the following names: Rodriguez, Perez, Sanchez, Martinez, and so forth.  You get the picture.  The “national pastime” has become the principal starring place of Latino/Hispanic athletes in our nation.  While there are Spanish-surnamed players in other sports (such as MLS), they are but a blip on the radar for fans in the NFL and NBA (though that is changing), not to mention the NHL (see Austin Matthews).

An article just prior to the start of the 2018 season noted that almost one-third of current MLB players, and nearly one-half of minor leaguers, were of this background.  To its credit, the Majors responded recently (2016) with the very successful “Ponle Acento” (put an accent on it) campaign wherein teams added the tilde to jerseys.  How and why did all of this come about? Certainly, MLB is paying attention to the growing Latino fan base; particularly in certain markets.  But it is more than dollars and cents (although that is a big part of it, of course).  Most fans are familiar with the story of the gallant and supremely talented Roberto Clemente.  He broke down barriers and spoke out against injustices, on the field and off, all the while fashioning a legendary career between the foul lines.  Obviously, he was not alone, and there have been several good recent biographies (for adults, there are many such items in juvenile literature) on players who played in the late 1950s and early 1960s, such as Tony Perez and Tony Oliva, Juan Marichal, Orlando Cepeda, and going even further back in baseball lore, the great Al Lopez and Armando Marsans.   There are also good introductory works about old-timers by authors such as Tim Wendel and Nick Wilson.  For those who are more academically inclined, it is essential to read works by Samuel O. Regalado and Adrian Burgos to begin to get a sense of this important history.  There have even been autobiographies/biographies of more recent Latino stars such as Mike Torrez, Mariano Rivera, Jorge Posada, and Albert Pujols.  Still, a thorough and first-hand account of a man of the stature of Felipe Alou, who lived through the early stages of the rise to prominence by Latinos on the Major’s diamonds, is certainly a welcome addition to this growing body of literature. 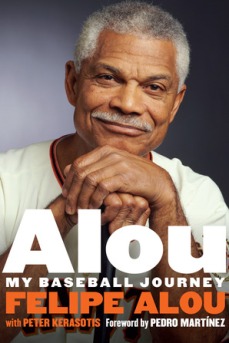 Alou: My Baseball Journey is a traditional biography in that it takes readers from Alou’s birth in the Dominican Republic during the dictatorship of Rafael Trujillo all the way to the present time; a total of more than 80 years.  It covers his childhood, his dreams and efforts to become a medical doctor, how Felipe came to the attention of Major League scouts, his playing and managerial career in the minors, as well as stints as a field general with the ill-fated Montreal Expos and the San Francisco Giants.  All of this is to be expected in such a work, and the coverage is thorough.  However, this work goes well beyond the happenings on the field and in the dugout and presents readers with an extensive “behind the scene” examination of what life (and the racism and stereotyping involved) in the minors and majors was like during the time when (as Sports Illustrated noted) the “Latins” began to “storm Las Grandes Ligas.”  One would think that by the time Alou made it to the majors in the early 1960s, and later proved himself as an excellent player and manager, he could have claimed victory and acknowledged progress made by the sport and the institution that is MLB.  Alou, while celebrating improvement to an extent, notes that, in some regards, racial and ethnic relations in baseball still have a way to go; even in the second decade of the 21st century.

Alou’s career provides great insight into the challenges that Latino players (and later, managers) faced in making their way to the Majors.  He begins the work with a discussion that ties directly to the “Ponle Acento” effort.  You see, his last name is not really Alou, but rather, Rojas.  The paperwork provided to a minor league team in Louisiana, which was his first stop along the road to the Giants, saw his name listed as “Felipe Rojas Alou” and promptly issued a jersey with “F. Alou” emblazoned on its back.  “At the time, I did not know enough English to explain the correction, so the name Alou stuck.”  There certainly was no interest in being “sensitive” to cultural differences in Lake Charles in 1956.  This was not the worst of it, as Alou, the product of an interracial marriage, had to deal with Jim Crow.  He further notes that things were possibly even more difficult for dark-skinned Latinos than for African American ballplayers in the minors during this time due to the language barrier as well as the fact that “black ballplayers…had places to go not available to Latinos” (p. 36).  Alou spent but one month in Lake Charles.  He learned about southern-style racism (although he praises a white family who housed him during his time with this club), and also became acquainted with a native son of the city who would play a large role in Felipe’s life: Alvin Dark.  His next move was to Cocoa, Florida, where things did go better, as at least he got to play.  His success on the field helped break down some barriers.  Things did improve as he moved up the line and played with AAA teams in Minneapolis and Phoenix.

When Alou finally reached the Majors, he enjoyed the opportunity to play in “the show,” but that did not mean that all issues were solved.  The Giants, one of the most “progressive” teams in scouting and signing Latinos, eventually hired, you guessed it, Alvin Dark as manager.  This lead to some heated exchanges between Felipe, Orlando Cepeda, and others with a field general who thought that Latinos did not have what it took to be successful in the majors. Alou was criticized for, among other things, wanting to play winter ball in his homeland, and for speaking Spanish to his brothers and other Latino ball players (referred to as “fraternizing” by MLB).  To his credit, Alou interacted with Clemente and protested the way Latinos were quoted (phonetically) by many sports writers who covered the Majors.  Alou noted that he and Dark reconciled before Alvin passed away at age 92.  While he played, Felipe and others also dealt with the “common knowledge” that Latinos did not have the “right stuff” in terms of (as Dark put it) “desire, effort and intellect.”  This would have an impact on Alou’s career once he moved into management.

In one of Alou’s final stop in the Majors, with the Yankees, Ralph Houk discussed with him the notion that he had, possibly, the “right stuff” to become a manager somewhere down the line.  He culminated his career with the Expos (1973) and with the Brewers (in early 1974).  Now what, he thought?  Alou became involved with a professional league in Santo Domingo, but that did not last.  He also tried his hand at broadcasting, but that was not successful either.  What to do?  Alou played some more winter-league ball in order to make ends meet.  He finally reached out to Jim Fanning of the Expos and served the club as a spring training instructor, and eventually, as manager for the West Palm Beach Class A squad in the Florida State League.  His first season was in 1977, and Alou proved quite adroit as a skipper.  He was promoted to Memphis (AA) in 1978, then to the big club as third base coach.  Wanting to run his own ship, he moved down to AAA with Denver.  All the while, he hankered for a shot at an MLB post.  This did not happen for a long, long time.  Many persons in Alou’s life asserted that this was due to his being mulatto and Latino.  While he did not doubt that this played some role, Alou’s take is more nuanced than simply using the race card.  This is a key aspect of the work.  Alou’s takes on political and social matters are erudite and well-articulated.  This, on its own, makes this a worthwhile read.

He finally got his chance with the Expos in 1992 and guided the team to the best record in the Majors in 1994.  Unfortunately, the strike ended that season and prevented Montreal from a chance at a World Series.  Alou managed north of the border until 2001, when another unsavory character of recent MLB vintage, Jeffrey Loria, fired him.  The next stop was with his initial club, the Giants, where he posted a .529 winning percentage and retired after the 2006 season.  Even at this stage of his career, with nothing to prove, Alou faced a final challenge to his intellect, and that of his Latino players.  Larry Krueger of KNBR, in criticizing a team that stood 45-61 in August of 2005, used some inelegant language about “brain dead Caribbean hitters” and a manager “whose mind has turned into Cream of Wheat.”  Alou argues that he “unloaded” because “I had a voice now.”  Krueger tried to explain, but the damage was done.  Ten years later, Krueger returned to the station, but Alou says that they have not interacted.  He indicates that he forgives Krueger, but he challenges the “system…that still fosters the type of bigotry that came out of his mouth” (p. 280).  Alou finishes the book by examining the establishment and purpose of a baseball academy in the Dominican named in his honor (Rojas-Alou) which serves as the Giants’ headquarters for Latin American operations.

In sum, this is an excellent work that should be part of any baseball aficionado’s library.  Of course, it covers the life of a great ballplayer and manager in total.  But it is much more than that.  Alou and Kerasotis contextualize the experiences of this legend and use it to shed light on the key social issues, and baseball’s place in these, from the 1950s through the current time.  Baseball truly is the national pastime, it just so happens that as our nation’s demographics have changed, so have those of the sport.  By reading this work, we get great insight, the good, the bad and the ugly, into what it was like to be at ground zero of the genesis of this makeover.

Jorge Iber is a Professor of History and Associate Dean of the College of Arts and Sciences at Texas Tech University in Lubbock. His area of specialization is the study of Latino/a participation in the history of American sports. He is the author/co-author/editor of nine books. His most recent work, Mike Torrez: A Baseball Biography, is a biography of former Major Leaguer Mike Torrez (he of the pitch to Bucky “Bleeping” Dent in the 1978 playoff game between the Red Sox and Yankees) published by McFarland.