Earlier this month, we witnessed the Cubs win its first World Series since 1908, breaking the infamous “Billy Goat Curse.” The curse, as legend has it, was placed on the Cubs in 1945 by Billy Goat Tavern owner William Sianis.  As Nathan Michael Corzine’s book, Team Chemistry: The History of Drugs and Alcohol in Major League Baseball, would suggest, it is only fitting that such vindictive voodoo would be practiced by a bar owner, as professional baseball has been cursed throughout its history in one way or another by drugs and alcohol. 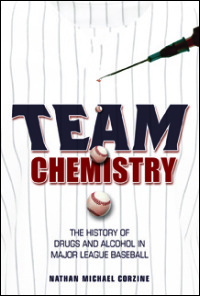 In Team Chemistry, Corzine sets out to discuss and debunk the myth that baseball’s “drug problem” only existed during the “Steroid Era” of the mid-2000s, when baseball greats like St. Louis’s Mark McGwire plead the fifth on Capitol Hill. Instead, Corzine argues that drug use, whether illegal or legal, has always existed in the sport. With analysis centered on the impact of commercialization and hegemonic masculinity on professional baseball, Corzine divides the book into six chapters, each laying out the story of a specific type of drug and its relationship with professional baseball. Corzine argues, more so than a drug problem, baseball has a “paradise problem,” as it has been built on and blinded by a romanticized nostalgia that turns a blind eye to the faults of the league and its players (p. 3). Corzine suggests that it is these faults that make baseball a mirror of American society and culture, not the idealized version of the sport that is often clung to, writing, “Major League Baseball is not Eden, and it is not perfect. This is what makes it so interesting, so important, and so utterly American” (p. 8).

Corzine uses the first two chapters to argue, “Tobacco, alcohol, and baseball were together from the beginning” (p. 33). Chapter One, “Time in a Bottle,” outlines the use of alcohol in the MLB since the league’s inception. Using the story of Mickey Mantle’s struggles with alcoholism, Corzine discusses the ways alcohol use was celebrated in the sport as a mark of masculinity and was excused because of the widely-held belief that drinking aided players’ performance.  In Chapter Two, “Tobacco Road,” Corzine explains how smokeless tobacco use was linked with notions of class-based masculinity and commercialization. Chewing tobacco was considered an expression of rugged masculinity, and soon became synonymous with baseball through the advertising endeavors of tobacco agencies. Despite the cancerous effects of tobacco use, highlighted in the chapter by Bill Tuttle’s story, chewing tobacco enjoyed a long life in the MLB’s spotlight until the league implemented a smokeless tobacco ban in its 2012 Collective Bargaining Agreement.

Chapters One and Two, in my opinion, serve as some of the more distinguishing parts of Corzine’s work, when compared to other chronologies of drugs in baseball, which often focus on illicit (either by legal or league standards) drug use. In his first two chapters, Corzine offers the most significant critique to those who believe baseball’s drug use is isolated to steroids and other performance-enhancing drugs. Early on he suggests that the idea that alcohol and tobacco use are different from steroid use because they are legal “misses the point.” (pg. 13) He then proceeds by laying out how players have used these legal substances in the same way that other players have used performance-enhancing drugs—to either take off or gain an “edge” in order to have an advantage over their opponent. For a sport hung up on its Golden Era—a time when the game was based solely on talent, having not been tainted by PEDs, and was “pure” and “clean”—Corzine challenges if this era even existed.

In Chapter Three, “Where’s the Dexamyl, Doc?” Corzine discusses the irony of the cliché of “team chemistry” that is the namesake of the book. The overuse of the phrase by so many in the sports world took for granted that “real chemistry” was at work in major league baseball. As Corzine writes, “The notion that real chemistry . . . could alter the shape and course of the game was simply unthinkable. It was so naïve” (p. 56). He argues that it was this “naïve” view of the use of drugs in baseball that led the league to go without a drug policy for decades, despite the increased use of prescription tranquilizers, amphetamines, and other therapeutic drugs by players in the 1950s and 1960s. As Corzine summarizes, baseball didn’t have a drug policy, because it was believed that baseball didn’t have a drug problem.

This line of thinking continued, even as the use of illicit drugs like cocaine and marijuana increased among players, as Corzine outlines in Chapter Four, “Pitching Around the Problem.” In the 1980s, when the league issued its joint drug policy, it only applied to “hard” illicit drugs, not marijuana or the prescription drugs that had become so heavily used throughout the league. The policy also “lacked teeth,” as it did not authorize mandatory drug testing and was largely disfavored by members of Major League Baseball’s Players’ Association (p. 109)

Chapter Five, “This is Not Just a Test,” discusses the backlash and consequences of the league’s “ineffective and unworkable” joint drug policy (p. 122). In 1985, the league’s drug crisis reached a “crescendo” when fourteen current and former players for the Pittsburgh Pirates were called to testify before a Pittsburgh grand jury about their drug use (p.111). What has been dubbed the “Pittsburgh Drug Trials” served as one of baseball’s biggest all-time scandals. During the time of President Reagan’s “War on Drugs,” the league restructured its drug policy, authorizing mandatory drug testing and fines for violations.

In Chapter Six, “Summers of the Long Ball Frauds,” Corzine discusses the “Steroid Era,” the period that is most often thought of when discussing drug use in professional baseball. Corzine argues that the widespread use and acceptance of performance enhancing drugs was an effect of the sports-media complex. Bringing full-circle his argument of masculinity’s major role in major league substance abuse, Corzine argues that steroid use was ushered in by the commercialization of the game and the media’s representation of baseball players, as brands such as Nike “conflat[ed] sex, power and the home run barrage” (p. 159).

Corzine’s argument that the history of baseball’s drug and alcohol use has been influenced, if not entirely catalyzed, by notions of hegemonic masculinity, arguably, serves as both a distinctive strength and noted weakness of the book.  In most chapters, Corzine only dedicates a few lines to a paragraph to the idea that drug use in the major leagues is and was heavily-influenced by traditional ideals of masculinity. While this is effective in getting Corzine’s point across, the argument could have been further substantiated, especially as it is used as a touchstone throughout the book. Further, I would have liked to have seen Corzine discuss how these notions of masculinity were heightened or changed in regards to black players, particularly when the MLB borrowed some of the NBA’s standards in crafting its drug policy as discussed in Chapters 4 and 5, and during the Steroid Era described in Chapter 7.  Was there resistance to the idea of the MLB, a largely white league, modelling its drug policy on that of the NBA, a majority black league? Were Barry Bonds and Sammy Sosa viewed more critically for their drug use than Mark McGwire, or vice versa? What are the social and cultural implications of Barry Bonds being “public enemy number one” during the Steroid Era)?

With this, however, Corzine’s argument that traditional notions of masculinity and major league substance use are irrevocably linked is of critical importance for the book. In a sense, Corzine’s work is a revisionist history of professional baseball, sanding down the glossy shine that a romanticized nostalgia has provided the sport, to reveal some of the MLB’s most deep-seeded issues. Providing an analysis that is concerned with the role of gender in both creating and covering these issues, further serves as a means to this revisionist end. Discussing professional athletes as fallible to hegemonic masculinity is an important analytic mode that I believe can only further our understanding of not just the history of professional baseball, but the larger, more general history of sport.

One of the aspects of the book I enjoyed the most was Corzine’s prose. Take for example his description of the utopian image of baseball fans and pundits have held onto throughout the sport’s history:

The game of baseball was a reliable pinch-hitter for Eden, a perfect proxy for the purest of places. Baseball, in the hands of the most adroit scribes, became an almost sacred metaphor for nation, the daily reenactment of American exceptionalism. The game’s mostly urban theaters were imbued with agrarian religious sanctity. Ballparks became steel-and-brick chapels wherein the masses convened, amid clipped grass and sunlight, to receive an education in good, clean, Americanism (p. 3).

It is language like this, scattered throughout the book, that allows for Corzine’s work to read like historical fiction, which is probably all too appropriate. While this language may prove too “flowery” for some, it was completely fitting for Team Chemistry, especially when considering that it is this romanticized, fictitious image of baseball that Corzine tries to debunk throughout his work. He meets the “plum-colored prose” of baseball writers with his own, highlighting the dangers of viewing baseball through notions of nostalgia and ignoring the larger issues that burden the sport and its players (p. 3).

Corzine’s well-crafted chronology of the history of drug and alcohol use in Major League Baseball is a good read for fans and scholars alike. Team Chemistry offers new insights and analytic modes to address both of baseball’s substance problems—it’s problem with both legal and illegal drugs and its problem of relying on the romanticized memory of the sport, rather than the reality of its clubs and players.

Mercedes is a Juris Doctor candidate at Tulane University Law School with a concentration in Sports Law. She holds a Master’s in Women’s History from Sarah Lawrence College and is a proud alumnus of LSU. Her research primarily focuses on the historical and legal implications of civil rights issues in sport. Mercedes can be reached at mtownse3@tulane.edu.