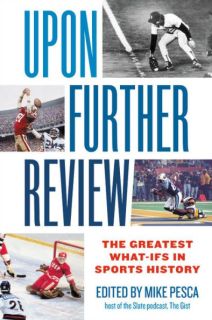 Upon Further Review may be the most uneven book that I have seen recently, with chapters (each 6-15 pages) by a myriad of authors on some interesting, and some not so interesting, topics. Only three chapters had footnotes, two of which were at the end of the book and one at the end of a chapter. Of those, two, that by Claude Johnson, regarding a “World Championship” contest between the New York Rens and the Minneapolis Lakers, and a second by Julian E. Zelizer, speculating on what if Richard Nixon had been good at football, were intriguing and thought-provoking. The other footnoted chapter, by Nate DiMeo, questioned what if the Olympics had never dropped tug-of-war.

Zelizer’s chapter was marvelous, well-written, well-researched, and extremely thoughtful. The political implications of a Richard Nixon who had more confidence, personal accolades and less paranoia are examined and supported in Zelizer’s conclusions. His chapter makes the book an enjoyable exercise.

Johnson’s chapter also was well-researched and calls into question the alacrity with which professional basketball might have been fully integrated and made for a better, faster game is intriguing and speaks to social issues as well as professional capabilities.

Of the non-footnoted chapters, a number stand up to scrutiny about their import and the questions raised. These include Katie Baker’s “What if Wayne Gretzky Hadn’t Been an Oiler?”, Ben Lindbergh’s “What if Major League Baseball Had Started Testing for Steroids in 1991?” and Will Leitch’s “What if Baseball Teams Only Played Once a Week?”.

Unfortunately, many of the chapters are rather like bar room discussions: no data, questionable assertions, and lots of opinion. It’s hard to argue with them or to care that much. Thus, it’s difficult to strongly recommend this book for its sports history (with noted exceptions), but it might provide a bit of fun (Pesca’s charge to his authors) at the bar some evening.