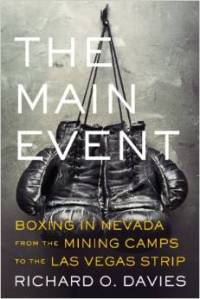 Richard O. Davies’ new book The Main Event: Boxing in Nevada from the Mining Camps to the Las Vegas Strip is entertaining and insightful in many ways. It blends new and familiar stories while offering a unique perspective on the history of sports. More than a sports history book, it is a critical text on the history of Nevada. Indeed, Nevada is the central character as Davies explores the highs and lows of the state’s relationship with boxing. Davies takes the reader through 8 Rounds — not chapters — before leaving them with a “split-decision.” Over the course of these rounds, it becomes clear that Nevada’s boxing history is split between into three distinct periods.

The first period — which comprises the first three chapters — covers the sport’s early history and major championship fights such Fitzsimmons — Corbett 1887 and Johnson — Jeffries 1910, when Nevada was one of the few states where boxing was legal. Relying on his roots as a political historian, Davies also explains the bureaucratic manipulating involved in promoting boxing.

Such promotion relied on the combination of rowdy mining culture, liberal minded politicians looking for an economic boom, and brash boosters like George L. “Tex” Rickard. Here Davies recounts stories of Goldfield, Nevada, a mining boomtown home to a healthy saloon and gambling culture. Joe Gans defeated Battling Nelson there in 1906. It is in Goldfield where Rickard made his name, stacking 1,500 gold coins worth $30,000 in a bank window to both publicize and prove he had the money to guarantee a championship fight.

Tex Rickard’s success as a promoter along with the country’s changing sensibilities allowed him to migrate east to New York City and establish a monopoly of his own at Madison Square Garden. Nevada soon lost the national spotlight and its monopoly on the sport. This second period — one of limited national exposure or importance — lasted for nearly four decades.

Boxing did not entirely vanish from the Silver State, however. While Round 4 traces the decline of major championship prize fights, Round 5 focuses on the state’s local boxing culture. Amateur boxing in Nevada remained important and was an extremely popular sport at the University of Nevada. Though it was unfamiliar to him when he arrived at the University as Provost in 1980, Davies deftly explains the peculiar institution of collegiate boxing. The Nevada Wolf Pack competed in the short lived NCAA sanctioned sport before transitioning to the newly formed National Collegiate Boxing Association. In the mid-1980s the pressures of Title IX forced the team into club status and obscurity despite its tradition of success.

Round 6 focuses on the life and career of Mills Lane. Famous for his catchphrase “Let’s get it on,” Lane became a popular culture icon as a boxing referee. He oversaw 97 championship bouts, including the famous Mike Tyson ear biting incident (which was his last). Lane, who was also a judge and Washoe County District Attorney during his career, later became a reality TV star as Judge Mills Lane. Though Davies doesn’t mention it, younger readers will remember him from the gruesome MTV claymation-show Celebrity Deathmatch. He did the voice-overs for the show’s referee, which was based off of him. His life serves as a transition from Nevada’s limited importance in the world of boxing to the return of championship fights. Lane rise as a boxing referee and position in popular culture parallels the third period Nevada’s boxing history — the return of major boxing events and the rise of Las Vegas.

Prizefighting and Las Vegas became nearly synonymous during the last thirty years of the twentieth century. Between 1960 and 2010 Las Vegas held over 200 championship fights. Davies credits Muhammad Ali with reenergizing the boxing culture of Nevada and pushing Las Vegas to the center of the prizefighting world. Round 7 looks at the city’s relationship with Ali. In Round 8, Davies connects Las Vegas’ ascent with the state’s changing demographics and the influence of two of the sport’s most important promoters: Don King and Bob Arum. Their ability to attract money and headlines while also scheduling exciting bouts solidified the sport’s popularity in Las Vegas. Likewise, the rise of Oscar De La Hoya and other hispanic fighters appealed to many local residents who migrated to Nevada from Mexico and the Southwest.

In his final chapter “split decision,” Davies wrestles with boxing’s decline in popularity and where it fits with the rise of MMA and UFC. He’s unsure of the sport’s future, but remains convinced that, as long as there is money and entertainment involved, it will be hard to supplant Las Vegas as the sport’s center. Nevada has long viewed boxing as a part of its economic strategy — one that’s tied to tourism, entertainment, and risk.

Because Davies book is relatively short it reads more as a greatest-hits of boxing history in Nevada. He presents mostly familiar stories but adds a new perspective that connects them to Nevada history. Indeed, one of the most interesting things about this book is how it engages sports history — and the history of boxing in particular — as a study of place. In each section of the book, boxing is presented as a component of Nevada’s economic, social, and political life. Through the state’s changing relationship with the sport was often a product of outside influences or factors — such as Rickard moving east or the NCAA eliminating boxing. Nevada continued to embrace boxing while adapting to the new conditions. In this way, Davies describes boxing as both a sport and an industry essential to the economic and cultural life of the Silver State.

Throughout the book Davies also picks up on important themes in the history of boxing such as the centrality of place and the key role of promoters. The greatest eras in boxing have coincided with a strong control of the sport by a few individuals. This was true for Tex Rickard in Goldfield and then later with Jack Dempsey in New York. This control was essential in scheduling big fights, guaranteeing money, and attracting large crowds.

Rickard was the first of a string of men who controlled both Madison Square Garden and the sport of boxing. Mike Jacobs’ Twentieth Century Sporting Club with Joe Louis and James Norris’ International Boxing Club followed suit. Don King and Bob Arum were similar promoters and helped facilitate boxing’s return to Nevada. They seized control of the sport and established their own monopolies tying boxing to the glitz and glamor of casinos and easy money of pay-per-view.

When Rickard left Nevada he made New York City was the center of the boxing world. It remained at the fore from the 1920s to the 1950s thanks to large crowds. Place was essential in developing the big time feel. Few places other than New York could supply the crowds and associated glamour of a big event. Entertainment moved West, however, and Las Vegas emerged as a center of entertainment and celebrity during the 1960s. Nevada no longer lacked the essential ingredients of the “Main Event.”

The idea of studying place in boxing is interesting and a bit unique. Unlike other sports, boxing is not explicitly tied to specific cities or stadiums. Prior to its entrance into mainstream culture, place was perhaps even more important to boxing. The sport was illegal in most states. During the 19th century finding a suitable place required advanced work — building a temporary stadium and a ring, ensuring adequate transportation, connecting to telegraph lines, etc. Since then, championship prizefights have been held all over the world as promoters and fighters search for the biggest payday. Destination matters less because of satellites and pay-per-view, but the lure of the big crowds and important people remains important. The Main Event requires the spotlight. Throughout its history Nevada has craved these things, too, and worked to promote itself as a haven for boxing.

One final note of disclosure, my perspective of the book may been shaped by my personal involvement in the project. Richard O. Davies was my advisor for my master’s degree at the University of Nevada. While there, I wrote a seminar paper for him that he cites in the text. Likewise, I read and commented on the book proposal and a draft of the manuscript during the writing process.

Andrew McGregor is a PhD Candidate in History at Purdue University and the founder of this blog. You can reach him via email at amcgrego@purdue.edu or on Twitter: @admcgregor85

7 thoughts on “Place and Promotion: Boxing in Nevada”