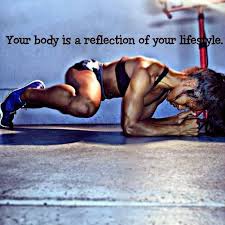 Shari Dworkin & Faye Wachs have written extensively about the conflation of fitness with health. They argue that a fit-looking body is presumed to be healthy. But, what exactly is a fit-looking body? And how is that tied to issues of race, class, and gender? Further, how does U.S. culture shape our understandings of what bodies could and should look like? And, what are the implications of locating the markers of health on the surface of the body?

Fitspirational images and catchphrases are quite ubiquitous, circulating on social media and online platforms such as facebook, twitter, instagram, and pinterest. However, none have garnered as much cache as “strong is the new sexy.”

The emphasis on sexiness belies the purported focus on health, and reveals the problematic nature of relying on visual cues to mark health. These visual cues are always already wrapped up in issues of gender, race, class, and sexuality. The types of bodies which “look healthy” have changed over time and across cultures, just as the types of bodies which are considered beautiful and sexy have. When thinking about what counts as healthy and sexy, then, we must also consider how discourses of gender, race, class, and sexuality change (or don’t). Not coincidentally, it is often relatively thin, white, female bodies which are considered both the most healthy and sexy.

But what does weight training have to do with it?

When thinking about what counts as healthy and sexy, we must also consider who gets access to what kinds of spaces and bodily practices. Building muscle requires regularly challenging one’s body. In today’s world, this often means accessing a gym. Gym spaces themselves as well as the cultures created within those spaces privilege and promote masculinity and have been (officially and unofficially) off-limits to women and people of other genders.

To be sure, “strong is the new sexy” and the crossfit boxes from which many fitspirational memes emerged have promoted weight training, specifically barbell training, across a diversity of bodies and abilities. However, bodies read as female participating in practices coded as masculine encounter any number of issues including accusations of doping, lesbianism, or not actually being female. Because male and female sexual difference is understood as dichotomous, with male physical ability superior to female physical ability, women who are “too big,” “too strong,” or any of the other “toos” become suspect.

Institutionally, sexed and gendered boundaries have been shored up by rule changes in women’s bodybuilding competitions. As Precilla Choi argues, gains in muscularity women bodybuilders had made were undercut by federations which closed competitive categories judged on muscle size, development, and symmetry. New fitness competitions were developed which demanded choreographed routines and penalties for too large muscles or inappropriately signified femininity (i.e. hair, make-up, and painted nails).

Sexiness is in the eye of the beholder (but he is always white, male, and heterosexual)

Like the debates surrounding women athletes posing nude for Maxim or Playboy, “strong is the new sexy” embodies the challenges women in sport & exercise cultures face. Like weight lifting and bodybuilding, sport more generally remains a masculine preserve. Therefore, women who participate in sport must negotiate the varying expectations of masculinity, musculature, and femininity. “Strong is the new sexy” could be read as a radical and subversive statement, with women staking claim to that which has so often been off-limits (strength & muscles) and redefining what counts as sexy. And yet, this redefined sexiness still exists within a world where women’s bodies are objectified, sexualized, and sold to the highest bidder.

Strong here is not actually about being strong at all, but is a means to achieving a sexy body. Working out is not desirable for the activity itself, but rather for the embodied results it promises. And these promised bodies are overwhelmingly white and thin with some muscle definition — bodies remarkably similar to the ideal thin yet toned body ideal they purportedly challenge.

The ideal female body cannot approach bodybuilding proportions without losing its perceived femininity. Without femininity that exists in opposition to masculinity, sexiness breaks down. Therefore, the sexy bodies promised to aspiring weight lifters are those which have already been deemed sexy by our culture, and “strong is the new sexy” does not provide the rhetorical framework to understand strength or sexiness outside of the heterosexual male gaze.

Fitness trends come and go; recycling training philosophies, equipment preferences, and workout programming. Yet, body aesthetics have remained at the core of the fitness industry as these trends rise and fall. As long as the fit-looking body is conflated with sexiness and healthiness, we will continue to see fitspirational messages that tell us we must change our bodies aesthetically to achieve health, wellness, and overall satisfaction.

In my next post, I’ll explore the history of body positive fitness philosophies to continue exploring the cultural implications of “strong is the new sexy”

Cathryn Lucas is a grad student and personal trainer who is interested in pushing back against impossible cultural ideals in writing and in practice. Cathryn just joined twitter (@cathryn_lucas) and doesn’t quite understand yet how to tweet.

12 thoughts on “Strong is the new sexy? Fitness Philosophies (Part 1)”