In Boxing: A Concise History of the Sweet Science, Gerald R. Gems provides one of the most robust and ambitious history of the sport published to date. This comes as no surprise. A professor in the Health and Physical Education Department at North Central College, Gems is the author of ten books including such essential volumes as Windy City Wars (1997), The Athletic Crusade: Sport and American Cultural Imperialism (2006), and For Pride, Profit, and Patriarchy: Football and the Incorporation of American Cultural Values (2000). Even for a writer as prolific as Gems, however, Boxing has to be considered a monumental accomplishment. Spanning the entirety of the sport’s history, from ancient Mesopotamia to the Vegas Strip, Gems’ work is organized into eight chapters, thematically arranged to highlight the overall social significance of boxing over time. 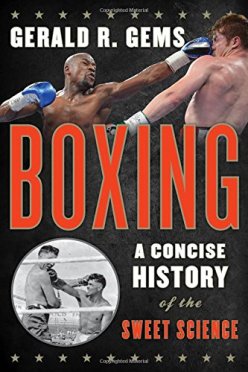 In his short opening chapter on ancient boxing, Gems guides readers through the varied boxing cultures of Mesopotamia, Egypt, Greece, Rome, China, and Thailand, setting the stage for a thorough discussion of the sport’s later development in Britain and America. Gems’ second chapter spans much of the sport’s history, from the taboo bare-knuckle contests of eighteenth-century to the widely-accepted, immensely lucrative, international boxing scene fans enjoy today. In the process, the author introduces readers to many of the sport’s pioneering boxers, managers, and promoters, including Englishmen James Figg and Jack Broughton and the champions who followed in their wake and early American champions such as Jacob Hyer, Tom Hyer, and John Morrissey. He also explains the gradual rise of gloved boxing, via the Marquis of Queensbury Rules, the subsequent popularization of amateur boxing, and the more recent fragmentation of professional boxing into multiple “world” championship granting organizations. By the end of chapter two, Gems has provided a satisfying glimpse at what’s to come, highlighting the numerous issues of race, class, ethnicity, religion, and gender that have at times both fueled and constrained the sport’s growth.

After some necessary but entertaining contextualization, Gems delves into the social significance of boxing with five thematic chapters, focused on social class, race, ethnicity, religion, and gender, respectively. In chapter three, Gems examines the intersections of boxing and social class, drawing on a wide range of commentary and scholarship,including everything from Joyce Carol Oates’ famous treatise On Boxing, to Antonio Gramsci’s philosophical treatments of hegemony, to Loic Waquant’s Bourdieusian sociological studies of the sport in Chicago. The content of the chapter is no less diverse. Gems’ analysis of boxing and social class is largely concerned with American pugilism, beginning with the gouging contests of eighteenth and nineteenth century rural America, before shifting his attention to the impact of industrialization on working-class prizefighting in mid-nineteenth century cities. After introducing readers to a working-class sporting culture predicated on physical dominance, Gems highlights the concurrent upper- and middle-class practice of sparring, supposedly emphasizing skill and muscular development over competition with one’s fists. Unlike most boxing historians,Gems’ analysis goes beyond the punch-for-pay world of professional pugilism, tracing the no less complicated history of amateur boxing from its origins as a sport for well-to-do athletes, controlled by exclusive athletic clubs, through its transformation into a proving ground for working-class youth.

Gem’s dedicates chapter four to boxing and issues of race, clearly defining the latter as an “abstract concept used to differentiate human beings without any real basis in scientific support” (pg. 73).  He situates his treatment of black boxers within the broader history of race in America, using court decisions likePlessy v. Ferguson (1896) and Brown v. Board of Education (1954) to provide depth and context. Gems explains all the typical, well-chronicled events in the gradual desegregation of boxing, while at the same time building on the existing scholarship. He leads with the careers ofAfrican-American boxing pioneers Bill Richmond and Tom Molineaux in England, where “nativist concern over the possible loss of the championship to a foreigner posed a greater threat than any racial comparisons” (pg. 76). Gems provides a thorough treatment of the persistent “color line” evident in nineteenth and early twentieth century boxing, including ample discussion of Jack Johnson – the first black heavyweight champion of the world – as well as less studied figures such as Peter Jackson, George Dixon, Joe Gans, and Battling Siki. The trials and tribulations of Muhammad Ali are handled in a compelling manner, followed by a discussion of Mike Tyson’s controversial reign as heavyweight champion. Gems inclusion of Caribbean boxers like Eligio Sardiñas, Emile Griffith, and Gerardo Gonzalez and Asian fighters such as Diosdado Posadas, Gabriel Elorde, and Yoshio Shirai, sets his history apart from so many others, allowing for a broader, more international treatment of race than is typical for boxing historians.

Gems next turns his attention to issues of ethnicity and boxing in chapter four, shedding some much needed light on numerous fighters and topics that tend to go unnoticed by scholars. He opens with the experiences of Irish boxers in big city America, illustrating how, “for many young men, boxing offered a release for their pent-up energies and a means to defend their personal and ethnic honor” (pg. 140). In addition to all the usual suspects in Irish-American boxing history, such as John L. Sullivan, Bob Fitzsimmons, and Jimmy Braddock, Gems delves into the histories of lesser known pugilists like Billy Conn, Packey McFarland, and Mickey Walker. His treatment of Italian-American boxers, as one might expect given his relatively recent book Sport and the Shaping of Italian-American Identity (2013), is just as extensive, discussing not only well-known figures like Primo Carnera and Jake LaMotta, but also many underappreciated and rarely studied fighters like Joey Maxim, Carmen Basilio, Tony Canzoneri, Rocky Graziano, and others. While few historians or boxing aficionados survey the experiences of Hispanic or Asian boxers in anything approaching a comprehensive manner, Gems tackles these subjects with broad strokes, laying an important foundation for future researchers to build on. Although previous authors have discussed some of the ethnic issues evident in boxing, Gems’ lengthy overview of Irish, Hispanic, Italian, Black, Jewish, and Asian boxers is truly without precedent.  As a consequence, the author introduces readers to a large number of little known boxers and their experiences.

All too often matters of religion are simply lumped in with related issues of ethnicity, but Gems succeeds in teasing the two apart into coherent, independent chapters. His discussion of the Catholic Youth Organization (CYO) is a particularly noteworthy contribution to the history of boxing. Gems’ chapter could benefit from a more detailed history of the Young Men’s Christian Association’s (YMCA) relationship with boxing and boxers, providing a Protestant equivalent to his strong treatment of Catholicism. Gems’ discussion of Judaism, likewise, could be expanded to include the Young Men’s Hebrew Association (YMHA) movement. In his section on Islam, Gems accomplishes some important trailblazing, taking readers beyond the more common narrative descriptions of Muhammad Ali’s conversion, towards a broader discussion of Islamic boxers worldwide, including commentary on outstanding Muslim boxers Amir Khan, Muhammad Qawi, NaseemHamed, and Anthony Mundine. He also outlines the struggles and accomplishments of the growing number of Islamic women competing in amateur boxing.  A project for future authors to tackle, following in the footsteps of Gems, is the broader status of amateur boxing in predominantly Muslim countries. In 2014, for example, Egypt, Iran, Iraq, Azerbaijan, and several other principally Muslim countries sent contingents to the AIBA World Youth Championships in Sofia, Bulgaria. In fact, Azerbaijan sent a whopping twelve boxers to the tournament, amassing a team equal in size to Great Britain. The United States of America and Canada, by comparison, sent just eight and four boxers, respectively. How popular is amateur boxing in these countries? Are most of the boxers from the Muslim majority or from minority religious groups? Do some sects of Islam endorse boxing more so than others? Do these twenty-first century examples have historical precedent? By building on the foundation provided by Gems, future scholars can start to tease out the answers to some of these questions.

In his final chapter, Gems focuses on issues of gender, becoming the first academic historian to thoroughly incorporate women’s boxing into a broader history of the sport.  In previous works, women’s boxing has been noticeably absent, highlighting their overall marginalization in the sport. Gems, however, provides a thorough overview of women’s boxing, including not only sensational fighters like Laila Ali and Christy Martin, but also female managers and promoters. In his discussion of masculinity, Gems provides a much needed update to the historical record by detailing the career of Orlando Cruz, the first active, openly gay fighter in professional boxing history.

In Boxing: A Concise History of the Sweet Science, Gems has provided a piece of boxing scholarship of immense value to students, academics, and fans alike. Its far-ranging scope is unrivalled. Several of the chapters not only summarize the existing consensus on issues like race and gender, but expand the existing history, pushing readers in new directions via the introduction of relatively unstudied personalities and geographies. In a genre dominated by histories of heavyweight champions, I found Gems’ willingness to discuss fighters in lighter weight classes very refreshing. I would have liked to read more on non-championship boxers, but to do so would require Gems to write a multi-volume set. As both a scholar and a fan, I cannot recommend this book highly enough.

MacIntosh Ross is an assistant professor of Sport and Recreation Management at Keystone College in La Plume, Pennsylvania. He was educated at Mount Allison University, Saint Mary’s University, and Western University, receiving a PhD in Kinesiology from the latter in 2014. His research, focused primarily on the social history of sport in the United States and Canada, has appeared in Sport History Review, International Journal for the History of Sport, and Journal of the West.