It is natural to long for a concise and clear historical timeline, to be able to easily and definitively explain the chain of events that lead to the culmination of a story. It is far easier to tell the history of a sport, for instance, when like basketball there is a verifiable timeline leading back to the sport’s foundations under the auspices of Dr. James Naismith. Too often, though, a sport is forced to rely on myth-making in the mold of Abner Doubleday and the origins of baseball. An origin story provides a date and a source by which to anchor a sport’s history, but too often pinning down that origin point is a matter of propaganda rather than a methodically verified fact.

This phenomenon is hardly specific to American sports. When considering the birth of Rugby, for instance, one is likely to instantly identify William Webb Ellis as the sport’s progenitor. The legend goes that Webb, a celebrated cricket player at the Rugby school, imperiously eschewed the rules by picking up the ball during a football match in 1823 and running with it toward goal. The legend lives on, with the trophy awarded to the champion of the quadrennial Rugby World Cup bearing his name.

One can find similar myth-making in Association football, for which the date most often cited is October 26, 1863—the birthdate of the Football Association in London. In forming this alliance in support of the kicking game, it is interpreted as the severance point by which the two codes irrevocably split from one another. These legends make for a tidy narrative, but they rarely cover the fuller picture of how a pastime comes into being. 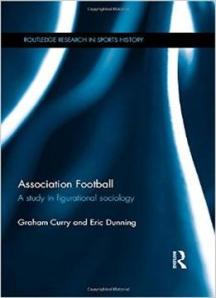 As they confront the foundational myths surrounding the origins of the various football codes, Graham Curry and Eric Dunning build upon their decades of prior work to produce Association Football: A Study in Figurational Sociology. Figurational sociology, a framework pioneered by Norbert Elias in the late 1930s, aims to analyze the processes of origination to better contextualize the present influence of cultural phenomena. Curry and Dunning utilize this framework as they insert themselves squarely into the ongoing conversation about the roots of the divergent codes of Association and Rugby football. While the book is rooted in sociological rhetoric, the authors provide ample explanation for the methodological underpinnings of their work. By making their work accessible for sociologists and other scholars alike, there is plenty of value that will benefit historians that research football development in mid-Victorian England.

Aiming to dispel the myth-making surrounding football’s origins, Curry and Dunning offer up a critical evaluation of their own theories while also evaluating them in dialogue with the sport as a working-class and pub-driven endeavor. What evolves in this monograph is a well-documented and complex history that examines early versions of localized rule formation in context with later universalizing trends that sought to rectify the variegation in accepted conventions. Curry and Dunning show through their analysis the progression of football codes that dispels the standard creation stories and shows more dynamic conversations in which public schools and universities played a leading role in codification.

The authors focus on the primacy of public schools and universities as the epicenter of the “status rivalry” development of football first posited by Dunning more than a half-century ago. This theory argues that the division into handling and kicking versions was the result of antagonisms based on class and sociocultural status between the public schools. In this argument, Eton dominated the push for a kicking-dominant form of the sport while Rugby favored the handling version, and other public schools played by their own versions that fell along this spectrum.

In pushing this narrative, Curry and Dunning are reiterating a long-accepted argument that has recently been brought into question. The authors are clear up front that a major motivation for producing this book now is to reaffirm the findings of their previous research. They are also clear in stating their aim to refute recent arguments put forward by John Goulstone, Adrian Harvey, and others that have sought to minimize the influence of public schools and elevate the impact of public houses on the development and dissemination of the sport.

The first six chapters are relatively straightforward, reiterating and reinforcing the prior work put forth by both scholars. Most of this monograph is based on the PhD thesis undertaken in the 1990s by Curry and accepted by the University of Leicester in 2001 under the mentorship of Dunning. In these chapters, the book walks chronologically through the history of football as a folk game toward its increasing consolidation at the school level and its diffusion throughout English society. The authors take pains to address developments in the universities, especially the links between the public schools and the colleges at Cambridge and Oxford; the influence of early club formation in Sheffield on the broader development of the sport; and the advent of professionalism on the evolution of the games. These chapters expand upon the previous work by these two scholars and others within the field, rather than presenting any revolutionary new argument.

What is most interesting in this monograph is the final chapter appended to the end of Curry’s thesis. In this section, Curry and Dunning set out to debunk four decades of scholarship that has been aimed at diminishing the influence of the public schools and universities on football code formation in England during the mid-19th century. The authors take pains to note the importance of the research unearthed by Goulstone and Harvey in their work on early popular dissemination of football, showing that this corpus of materials serves to broaden the complex storyline of football developments. But they also demonstrate how these revisionist histories have been undertaken with the syllogistic intention of stressing working-class origins at the expense of the extant research available. In doing so, Curry and Dunning demonstrate the ways in which these revisionist tracts ignore the administrative and jurisdictional power possessed by former public-school students in local and national organizational structures such as the Football Association.

Ultimately the new work by Curry and Dunning does an admirable job in dispelling these singular origin stories for the various football codes that originated in England. While still rooted in the status-rivalry theory that grants the greatest agency for rules development to the public schools and universities, Association Football also recognizes the impact of public club formation outside of the purview of the English educational system. Those longing for a definitive origin story will be disappointed, as Curry and Dunning have introduced greater complexity to the argument on the evolution of these pastimes. While the arguments by these two authors were easily anticipated, this monograph is nevertheless a valuable contribution to the debate on the Victorian origins of codified football codes.

Zachary R. Bigalke is a graduate student in the Department of History at the University of Oregon focusing on the impact of immigration and industrialization on the early development of various forms of football in the Americas. He is a regular contributor to the college football website Saturday Blitz and an editor at Sports Unbiased, and can be reached at bigalkez@gmail.com and followed on Twitter at @zbigalke.