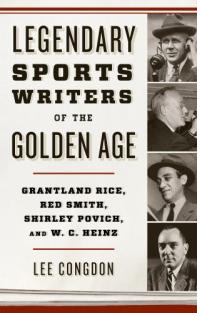 In Legendary Sports Writers of the Golden Age, Author Lee Congdon introduces the reader to four significant sports writers who began their careers in the 1920s and 1930s.  Long considered the Golden Age of Sports for the athletes who performed, Congdon focuses on the writers who brought these athletes to life. Congdon argues that this golden age lasted through the 1950s rather than just being confined to the 1920s.

Congdon is an emeritus history professor from James Madison University and has written five books focusing on baseball and American culture.  In his latest book, Congdon discusses four writers who raised the level of sports reporting to its highest level because he does not want them to be forgotten.

Each of the reporters makes a unique contribution to sports writing.  Congdon begins with Grantland Rice, who he calls the poet.  He says Rice turned athletes into players in a Greek drama.  Rice is considered to be the leader of the “Gee Whiz” school of writers who tended to overlook the flaws of stars, but Congdon says Rice was so much more than that.  Rice wanted to use the stories of athletes such as Babe Ruth to elevate society at a time when that was so needed after World War I.  To Rice athletes were the sum of everything they accomplished.

Congdon moves next to the career of Red Smith who he calls The Wordsmith.  Smith was not a sportsman himself but participated as an informed fan who also read Shakespeare nearly every day.  Smith saw athletes as the sum of all their accomplishments and faults, not just the greatest of what they did.  To him they were a bit like tragic heroes from Greek plays.  His writing earned him a Pulitzer prize in 1976.

Shirley Povich was Congdon’s choice for empathy in his writing.  Povich actually wrote great tributes to Smith and Rice after their deaths, honoring both men for raising sports writing to a level never seen before.  Povich continued that tradition, especially in his writing about baseball, which he recognized was a business but also an important force in American society.  He elevated athletes when they were deserving but had no hesitation in pointing out when they failed as well, just as people did in every day life.

Congdon ends his tribute with W. C. Heinz, who he calls The Novelist.  Perfecting his craft as a correspondent during World War II Heinz came to love writing about boxing as the most honest sport.  He eventually wrote a novel about a boxer, using Ernest Hemingway as his inspiration for style.  He brought athletes to life and saw them as more than just their accomplishments on the field.

Congdon does a nice job bringing the writers careers to life but really makes no overall argument.  Each chapter feels like it could stand alone and there is no real conclusion to the book.  He makes no effort to tie them all together and talk of their contributions as a whole. The lack of a cohesive argument is one of the weaknesses of the book.  The sources used are also not extensive but are just an introduction to each man’s vast amount of work.

Congdon does provide a good biographical treatment of each writer, explaining their background and how that impacted the writer’s they each became.  War had a large influence on their careers, as did the writings of each man.  They were all aware of and respected each other.  Even when they disagreed they seemed to appreciate the skills and contributions of the other writers.

The book does fill a gap in the literature about sports writers, which is currently not extensive.  By including Heinz and Povich he brings to light writers who do not get enough credit for their work.  Where he falls short is in making an argument about the writers he chose, taking a more narrative approach.  The book would make a good resource for a general spots reporting class and even a basic source for a sports history class at the undergraduate level. For more serious researchers this book will not add a great deal of new material.